What do a Chevy 409, Chrysler 429 Hemi, Ford 5.0, and GM LS1 all have in common? They all have pushrod engines, which were common for more than 100 years and are still in use today. We've taken an in-depth look at the different engine designs, but you might still be wondering why this “low tech" design is still around. Here's six reasons why the pushrod engine still rocks. 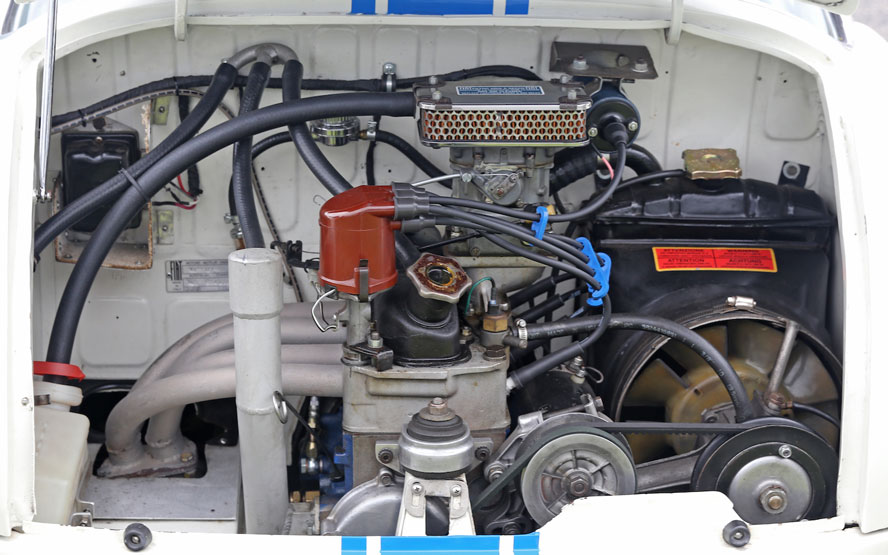 The enthusiast argument in favor of the overhead valve engine centers around simplicity. A 396 in a Chevelle is an easy engine to work on, for maintenance or modifying. On the other hand, a dual overhead cam engine like the Honda F20C in the S2000 loses the pushrods but gains more cams, more valves, a longer timing chain, cam position sensors, and several other miscellaneous parts. If you enjoying tinkering under the hood on a sunny weekend just because you can, the simplicity of the pushrod design means an easier time and less that can go wrong.

It's a fact of life that stuff costs money, even for an OEM buying camshafts in bulk. Fewer parts mean lower cost of materials, manufacturing, and assembly. Here's some numbers to back that up. The 1990 Corvette ZR1 was an incredible option package, but at an absurd $27,000, it nearly doubled the price of the car. This was partially due to the LT5 engine under the fiberglass hood, Chevy's first DOHC V8. Another example is found in the Ford Mustang. The 1995 Mustang Cobra had an OHV V8, but within the same design generation, gained a DOHC V8 in 1996. A 1995 Cobra had a base MSRP of $21,300, and the 1996 Cobra was essentially the same car with a DOHC engine and a base MSRP of $24,810. That $3.5k jump in one year was more than inflation. DOHC is simply a more expensive design.

Pushrod engines are still hugely popular for engine swaps due to their compact size. Without two cams spinning above the heads, the overall engine size is reduced. Compare the Mustang's 5.0L V8 from the '80s to the current “modular" 5.0L V8. Vanilla Ice's Mustang “five-point-oh" is 24" wide and 27" tall. For comparison, Jay Leno has a new Mustang GT350 with the DOHC “Voodoo" V8. That engine is dramatically larger, at 30" wide and nearly 30" tall. That's actually bigger than an old-school Chevy big block. Space considerations matter when adding turbo headers or swapping the engine into your '32 Ford coupe. OHV engines are the easy choice when space is limited.

Weight is the enemy of a performance engine. The more a vehicle weighs, the more the engine has to overcome to get the vehicle moving. That's why pro drag cars are as light as possible. More parts equal more weight, including the engine, which is why racers use titanium valves and carbon-fiber intake manifolds. It's not just the physical weight of the engine but rotating weight from moving parts. Due to inertia, spinning parts “weigh" more than static (non-moving) parts. Taking 5 pounds out of the camshafts, pulleys, flywheel, driveshaft, or wheels is equivalent to taking 25 or more pounds out of a non-moving part of the vehicle. In other words, lightening the rotating mass of the vehicle increases performance more than lightening the non-moving parts. Just skip all that rotating weight by going with a pushrod.

The pushrod design also offers an engineering advantage at low RPMs. Assuming all other aspects of our example engines are the same, the two-valve design will have increased air velocity at lower RPMs compared to the DOHC design. If the same amount of air is flowing through two ports and four ports, the air speed increases as diameter decreases. This is why a pushrod V8 makes power early and falls flat higher up, versus a DOHC design that needs to rev to make power. Granted, the pushrod design can't flow as well as DOHC designs at higher RPMs, which is why a traditional pushrod engine lost power if revved too high and suffered from valve float. NASCAR proved pushrod engines can rev to 10,000 RPM, but a big torque hit low in RPM is a traditional muscle car engine characteristic.

While enthusiasts don't really care about miles per gallon, it is nice when a great engine is also easy on the wallet. Pushrod engines benefit from all that torque down low in the RPM band with easy driving manners. Accelerating away from a stop light or cruising on the highway takes minimal revs, which translates directly to fuel savings. Since the pushrod flows better at lower RPM, that means (if you keep your foot out of the go pedal) that you will achieve superior gas mileage.

Do you have a pushrod engine you'll never let go of? Or maybe you had one of the famous V8s in the past. Tell us about your favorite pushrod engine in the comments below.