How Far Can You Drive on E? 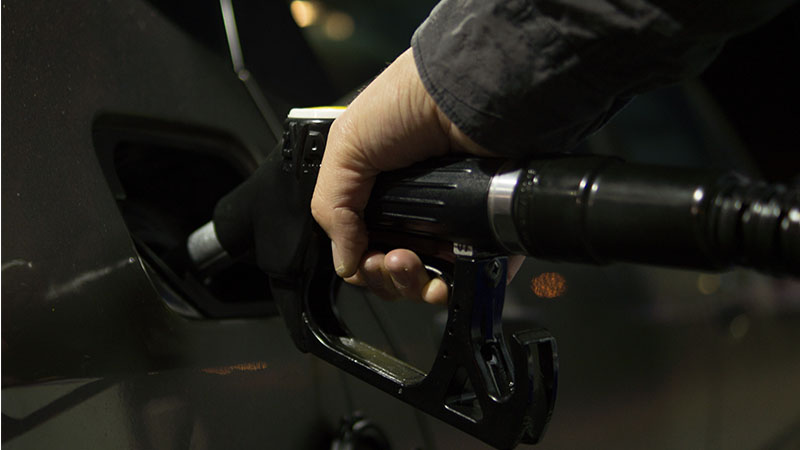 We've all been there. The low gas light flicks on, and we think E stands for, "Eh, I'll keep driving home and get gas tomorrow. I can make it." You anxiously do the math in your head: gas mileage vs. the amount of fuel you guess is left in the tank, and figure you'll make it.

The real question is: can you? Once that low gas light is on, just how much father can you drive? The answer may surprise you.

How a Fuel Pump Works

First, we're going to look at exactly what happens in your vehicle to make that low fuel light turn on. A fuel pump is exactly what its name suggests; just a pump that moves fuel from the fuel tank to the engine. DC power runs the motor inside the pump, which spins a turbine creating suction that pulls fuel into the pump body before passing through a one-way valve on its way to the fuel lines and finally the injectors. Modern pumps are a returnless design, meaning they pump only what the engine needs, rather than over-pumping fuel and having the excess cycle back to the tank in a separate line, like found in a 40-year-old car.

The low fuel light works on a system in tandem with the fuel pump. The fuel sending unit inside the gas tank has an arm attached to a float. As the fuel in the tank lowers from use, the float on top of the fuel lowers the arm, moving a resistor that controls your fuel gauge. When the resistance lowers to a pre-programmed level, the fuel light turns on, and the driver starts stressing about range. Common symptoms of running too low on fuel are rough engine operation (chugging and stumbling), and poor performance. Symptoms of running out of gas could be similar, or engine shutdown with no warning at all, just as if the key had been turned to off. 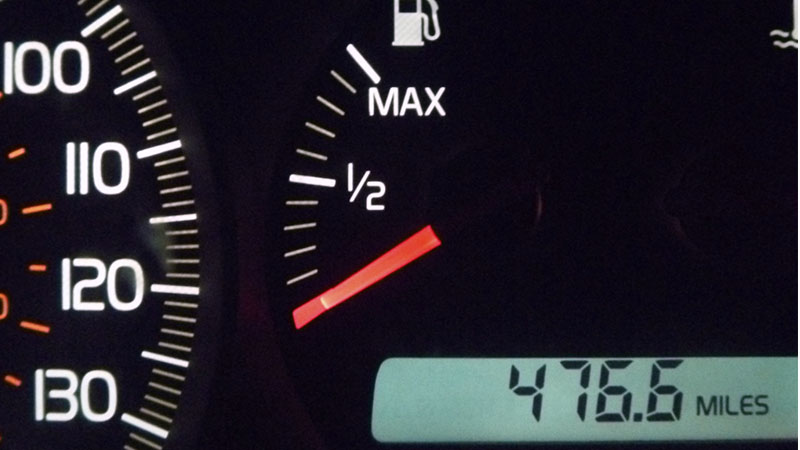 Running on Empty, Not Recommended

While you can probably think of someone you know that continually runs the gas tank low, driving continually with low fuel isn't recommended, for a few reasons.

First, gasoline acts like coolant and keeps the fuel pump motor at the ideal operating temperature. When you're running on fumes, there isn't enough gas in the tank to act as coolant. (Note: “Running on fumes" is just an exaggeration, as fuel injectors won't actually fire fumes.) The pump can also suck in air on a very low fuel level, which further degrades internal cooling ability. Liquids are more efficient at removing heat than gasses, which is why modern engines are water-cooled rather than air-cooled. Just as an engine doesn't work well when overheating, a fuel pump continuously run near empty will run hot and have a shorter service life. 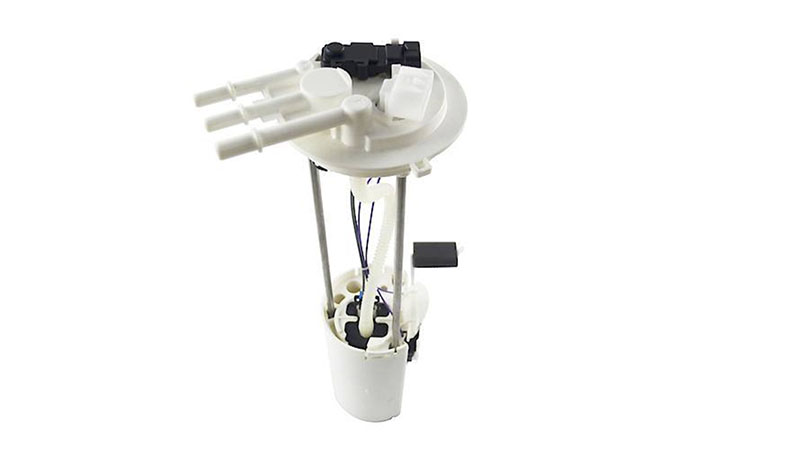 “Don't run the tank low, because the pump will pick up sediment," says your non-mechanic uncle, based on something he heard in an '80s action movie. Sediment buildup is more of a problem on older vehicles with steel gas tanks, which do corrode when exposed to moist air, like when a fuel tank is nearly empty. Sediment collects in the bottom of the tank, where the fuel pump draws in gas from. Sure, it has a strainer type filter, but if that starts to clog, the fuel pump works harder and starts to overheat. Modern high-density polyethylene gas tanks solved the corrosion issue, and have internal baffles to prevent fuel starvation during hard acceleration, braking, or cornering, but these can only do so much when you have less than a gallon in the tank. Running a tank very low and taking a hard corner with a bump could cause a disruption in fuel flow.

Who knew running low on gas could be so expensive? If you run entirely out of gas, you might think, “No harm done. I'll just grab a gas can and add a few gallons." While that does solve the problem, the air/fuel mixture went all kinds of wrong as the engine died, potentially damaging the catalytic converter. “Cats" aren't cheap to replace by a pro, or when doing it yourself. Additionally, if you didn't see the low fuel light/gauge and don't know what happened, trying to restart and cranking the engine with a totally empty tank quickly damages the fuel pump. The cost to replace a fuel pump can exceed $1,000 at a mechanic's shop, or over $500 when going the DIY route. If you do the DIY approach, you'll soon find out it's not much fun either, as it involves dropping the gas tank, draining any last drops of fuel out of it, replacing the pump, and then putting it all back together.

You might be saying, “But I want to keep the tank low so my car weighs less and gets better gas mileage." While the thought is correct that increasing weight decreases gas mileage, a difference of a few gallons makes no difference. Let's bury this myth with math.

A gallon of gas weighs 6.3 pounds, while at its lightest optioning, new Ford F-150 weighs 4,069 pounds with a 23 gallon tank. In this case, adding 11.5 gallons of gas for a half-tank increases the vehicle's weight by 1.8 percent (72.5 lbs). If gas mileage decreases by approximately 1 percent for every 100 pounds added, and you were hitting 25 MPG highway with half a tank, you're now getting a 0.725 percent increase, or 25.18 MPG while low on fuel. That tiny increase means you have to run approximately 140 gallons through your truck (while low on gas), before you save 1 gallon of fuel. Even your wallet won't notice the difference in gas mileage, but the fuel pump will appreciate it. There are far better ways to improve your gas mileage.

Your Mileage May Vary

Since vehicles are all different sizes and shapes, fuel tank size and design also varies. The tiny Smart ForTwo gas tank holds a little under nine gallons, while filling up a Silverado HD is painful with its 36 gallon tank. Then there's the “distance to empty" reading found in modern vehicles, which is a good guideline, but it's not perfect. The co

mputer is calculating fuel use on an average, based on previous driving conditions. since the last time you reset it. If you've been driving easy over flat land, and it says you have 40 miles left, that will be inaccurate if you suddenly change to urban driving or uphill conditions.

How far you can really go once the low fuel warning light turns on depends on your vehicle. YourMechanic completed a study showing how far each of the top 50 most popular vehicles in the US can go once their low fuel light is on. It varies from over four gallons, to under two gallons, with actual driving distance remaining a huge variable. Here's a look at the top five.

*Note that the second generation Prius really doesn't like running out of gas, typically requiring a tow to a dealership to charge, restart, and clear error codes. Long term owners recommend filling up before the low fuel warning. But in an emergency, you have a solid 76-81 miles left.

The popular Nissan Altima does well with an early warning, giving you the longest 81 to 114 miles of travel left before actual “E." This is for the fifth-generation Altima and the QR25 2.5L four cylinder, as the popular and torquey VQ35 3.5L V6 drinks fuel more quickly.

The GMC Sierra Denali also did well, thanks to four gallons in the tank when the low fuel light turns on, allowing 64 to 92 more miles, depending on driving conditions. The VW Jetta only gives you 1.85 gallons notice, but due to its solid fuel efficiency, that's still 57 to 85 more miles.

Ford took the middle of the list, with their vehicles like the F-150, Fusion, Mustang, Escape, and Focus all receiving the low fuel warning at 1/16th of a tank. Since those are all different sizes, and different size fuel tanks, they all scored in the 35 to 80 mile range when running near empty.

You'd think economy cars would do well in this comparison due to higher fuel efficiency, but that's not always the case. The Hyundai Elantra, Kia Optima, and Soul all have just 30 miles left once you get the low fuel warning. Find a gas station once you see it.

Last on the list, the Chevy Silverado lets you drive the least with the light on, only giving you 25 miles until empty. The modern Chevy has nearly the same specs as the F-150 and Ram, including MPG and tank size, so it must be that the Silverado's fuel light turns on at a later point.

Too long and you didn't read it: When the low fuel light turns on, just go fill up.

Do you run the tank to E every time? Have you ever run out of gas? Let us know what happened in the comments below.