Pearls, Flakes, and Chemistry: A Crash Course in Automotive Paint 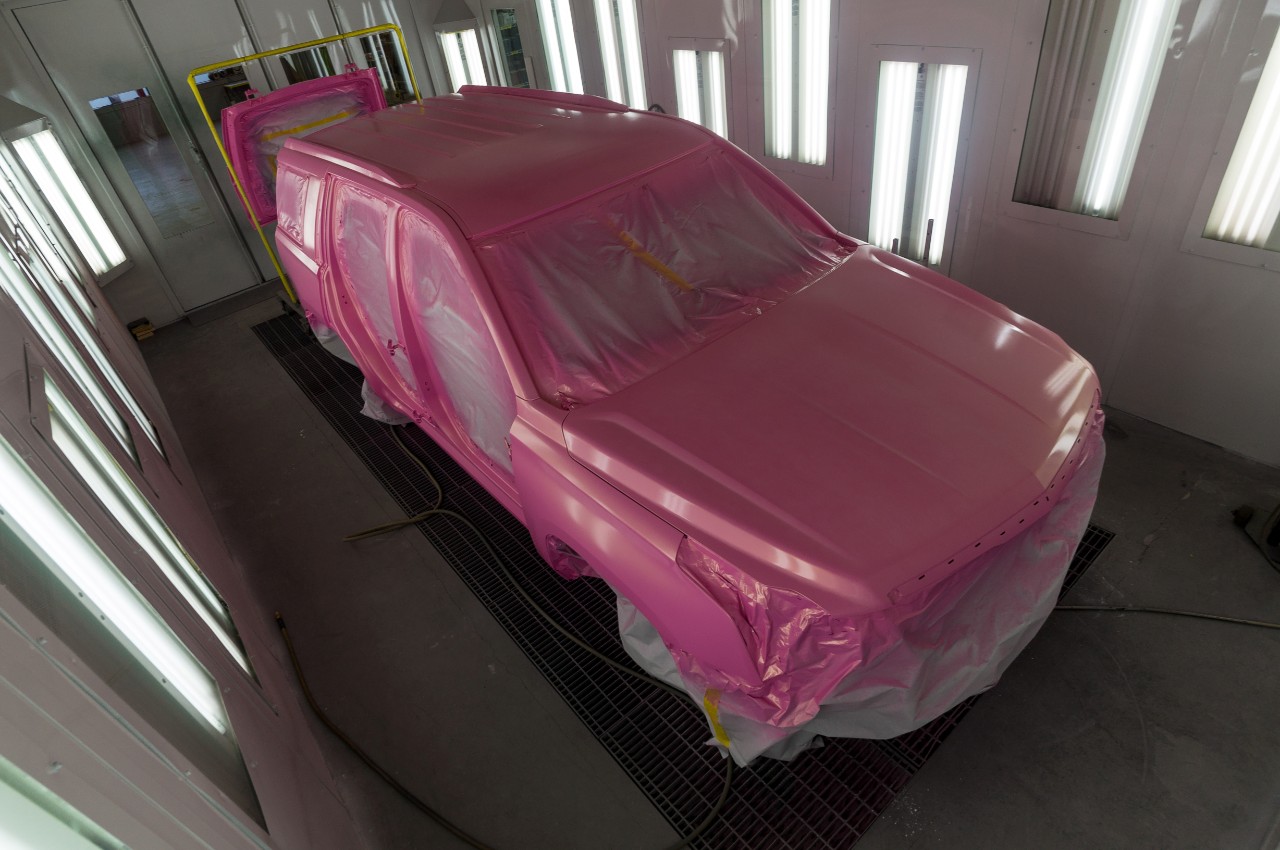 This seems like an easy answer; paint is that stuff you slather on your wood panel basement like you're Chip and Joanna Gaines. But the high school science answer behind it is more interesting than that. What we see as paint in a can is a mix of pigments, binders, and several other ingredients.

To answer your burning question, yes, you can paint a car with house or wall paint, but it's really not recommended. Automotive paint is acrylic, meant to be sprayed through a paint gun, and it dries quickly. Wall paint is water-based, applied with a roller and brushes, and dries slowly, making for an ugly mess when applied to bodywork.

Here's the wild thing about colors: The colors we perceive are because the atoms of the pigments reflect, refract, and/or absorb only certain wavelengths of the visible color spectrum. Let's say your Corvette is red. The paint's pigment absorbs the other colors in the spectrum, leaving only one wavelength to reflect back to your eye so you see it appearing red. It's not the pigment itself that is that color, but the pigment manipulating the light waves to make us perceive it as red (we'll see what serious light wave manipulation looks like below).

Why is red paint more expensive? 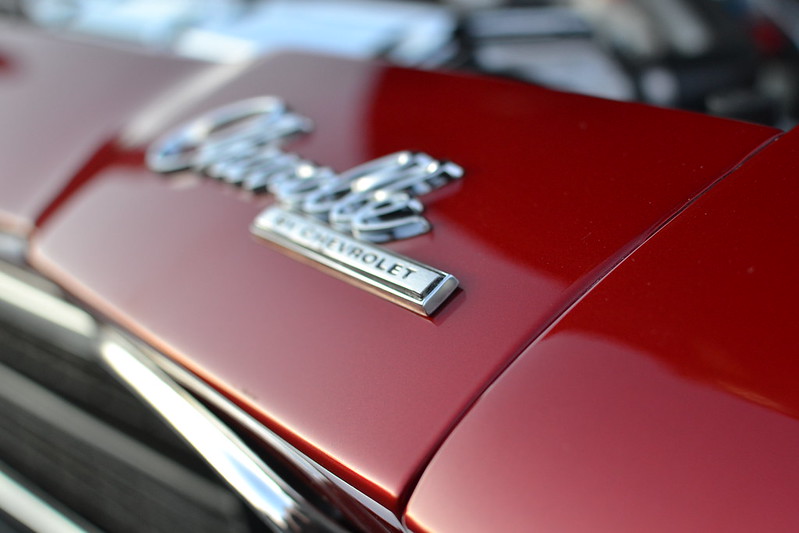 Speaking of red, this color has more issues than a Prius at the drag strip. While there are over 200 red pigments available to build thousands of shades, each one has an issue with safety, durability, or the all-important eye-pleasing factor. Prior to the creation of Ferrari Red 254 in the early 1980s, red paints were either hugely toxic to create, extremely fragile, or simply unimpressive to look at.

If it was a durable red, it was iron oxide based and more of a farmer's barn color than a show car that pops. If you wanted a brilliant red, the body shop charged extra when working with nasty chemicals, and you'd have to store your vehicle out of sunlight if you wanted it to last more than a few years. Red was either boring or expensive. That trend continued until the creation of the patented “Ferrari red," a safe, bright, and durable iconic red. Associated with high-end cars, the pigment sold for $100 per kilogram decades ago, which is still expensive when you consider a current Google search shows you can get blue pigment for $30 a kilo. For reference, you need approximately 2.5 kilos of pigment to make enough paint to cover an average car, meaning Ferrari Red was $250 for just the pigment in the 1980s. That was an expensive paint job. 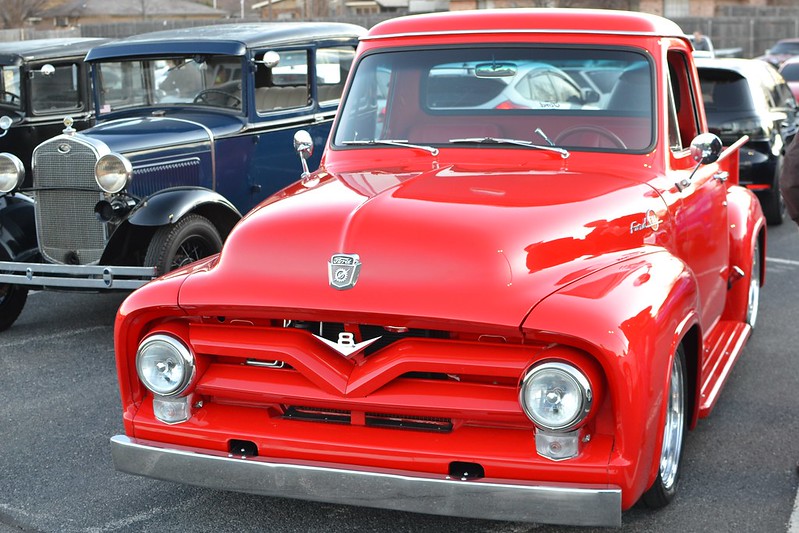 Ever notice how some cars from the 1940s still have their original paint, while some cars from the '90s have flaked off in big chunks? It's actually a case of “they don't build 'em like they used to." A hundred and twenty years ago, an Oldsmobile Curved Dash was painted like a horse-drawn carriage, by hand, and allowed to dry over the course of several weeks. With Ford's assembly line able to crank out a Model T in just a few hours, drying times had to be quicker, and this era introduced the paint gun and lacquer paints for shorter drying times.

A '50s Thunderbird had a stoving enamel acrylic paint filled with heavy metals, including lead. It was poisonous to deal with, but durable after a short baking period to speed drying. Environmental regulations hit the industry hard in the '70s and '80s, along with a switch to a water based urethane and clear coat. Unfortunately, it had issues bonding to the primer, which is why you commonly see unrestored '80s/'90s cars with huge chunks of paint missing.

The modern paint process is a mix of art and science. Toyota says their body shells receive 15 hours of pre-treatment designed to stop corrosion and prep the surfaces for paint.

The application process consists of robots spraying primer over an extremely clean body. Primer is gray, black, or white, depending on the base color that will be applied next. There's a very short bake time, then the base color goes on in another laboratory-clean paint room. After another quick heat, robots lay down the clear coat, with assistance from humans for the critical areas. Most factory applications are only one coat of each, not several layers of paint followed by three layers of clear. That's more common in your local paint and body shop.

One cool thing about the factory paint process is the creation of Fordite. The repeated painting of thousands of cars in dozens of colors creates lots of over-spray, which dries and hardens. Artists discovered this leftover slag can be cut and polished like a gemstone, creating beautiful jewelry pieces from industrial waste.

Business Insider recently reported on the huge increase in white cars on the road over the last 20 years. They said it's is due to the “Apple effect" (white accessories = expensive), and also because German luxury brands typically charge more for their metallic colors, leaving white as a popular no-cost option. If that's a little too boring for you, go with one of these special paints. 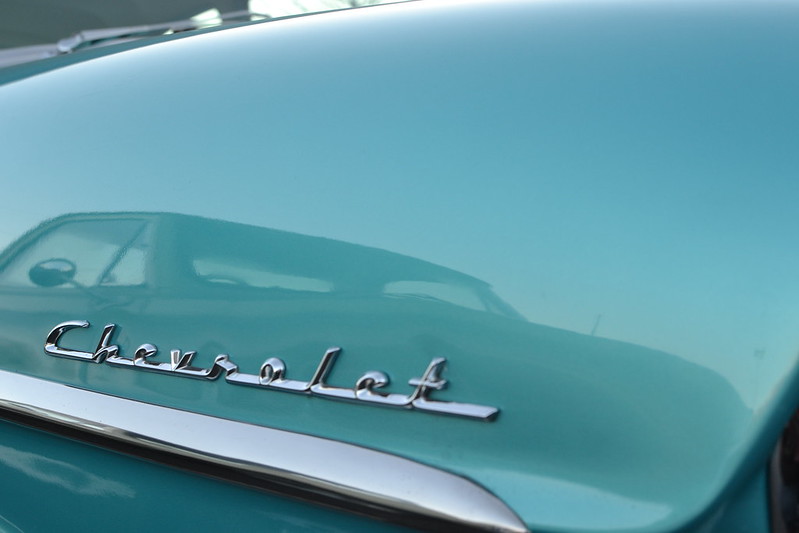 You've probably seen pearlescent or pearl paints with a unique finish, and probably noticed that they cost more than standard paint. This paint has the addition of ceramic crystals, called mica, that are transparent and allow light waves through. They also reflect and refract light too, slightly changing the hue and creating a kind of metallic sheen or glow effect. Pearl paints are more expensive due to the ingredient mix and longer drying time, but can pay off as they hold up better to UV rays. 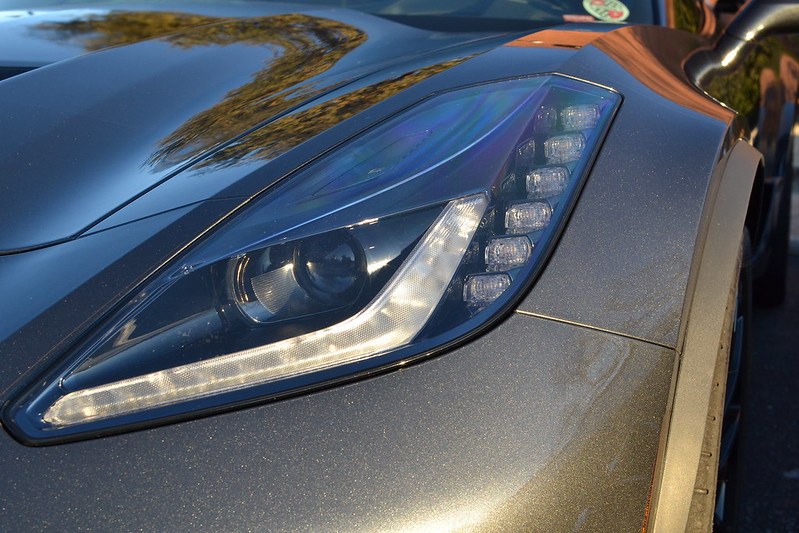 Also called metal flake, metallic paints use a mix of pigments and aluminum powder flakes (smaller than you can see individually) that reflect light. This creates a deeper, brighter shine from a distance, and tiny sparkles when viewed up close. “Heavy flake" paint is found in the show scene (and bass boats), with much larger individual metal flakes visible in the paint. Application needs extra skill and work as it can clog basic paint equipment, but the result is an eye catching galaxy of stars look. 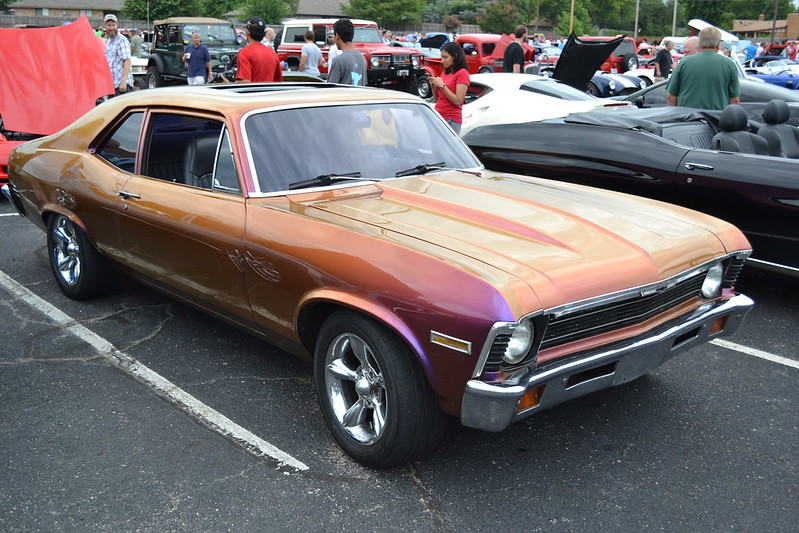 Flip-flop, or chameleon paint, changes colors when viewed from different angles. You see a car at an intersection, and it looks gold. When it makes the turn, the paint seems to shift to red and then deep purple. Interestingly, this is only a single color applied over a black base, with a clear coat to enhance shine and durability. 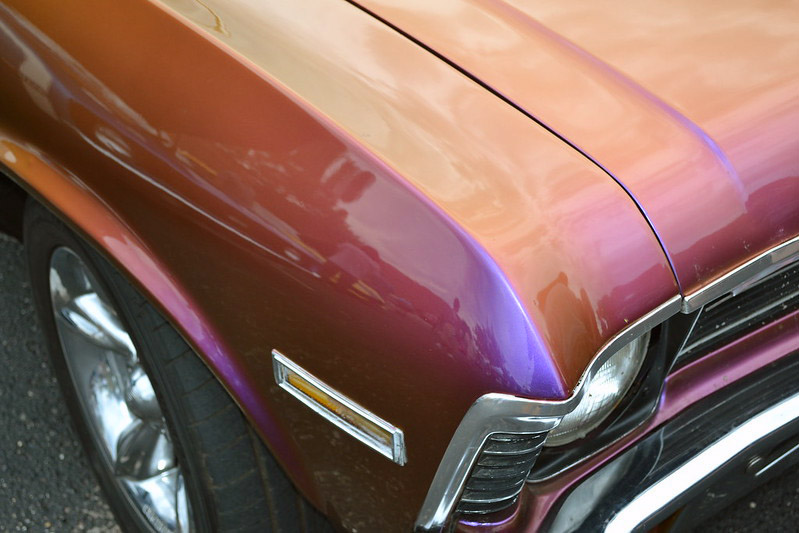 Painting flip-flop is similar to powder coating, where the part is electrically charged for a process called electrostatic spray deposition. Expert work is needed, as the layers must be uniform, or the part will be partially flip-flopped from any angle. It's difficult and expensive, so OEM use has been limited. Ford tried this a while back on their MystiChrome Cobras, and they're still among the rarest Mustangs made.

You might not find one at a show, but you can see this effect for yourself with a $100 bill. Hold it in the light at different angles and you'll notice an anti-counterfeiting rainbow effect. That's flip-flop in action. 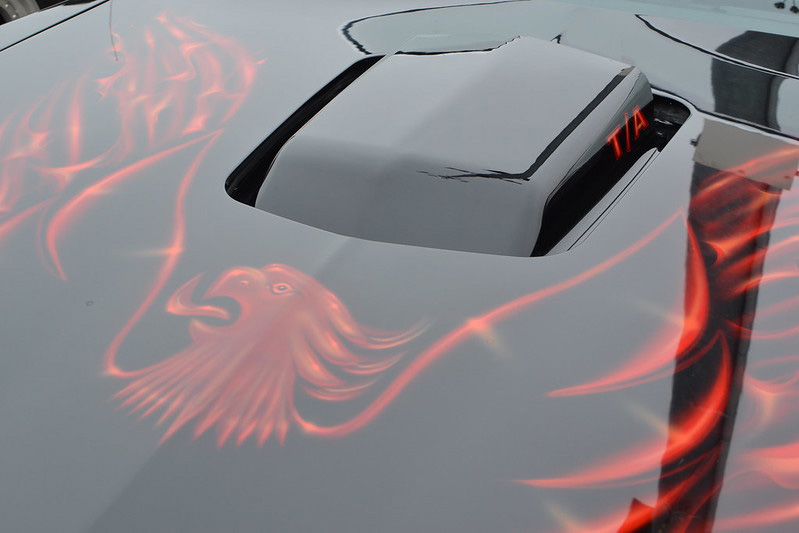 The ghost effect isn't a paint or additive, but a technique used during the painting process. Perhaps you want ghost flames on your hotrod. After the base layer has dried, select the color you want for the flame design. This is then sprayed using templates and free hand spraying, creating an artsy flame look. Then, the base color is misted over the flames, blending them into the background. The vehicle looks like it has just the base layer most of the time, but in direct sunlight, the ghost flames pop. 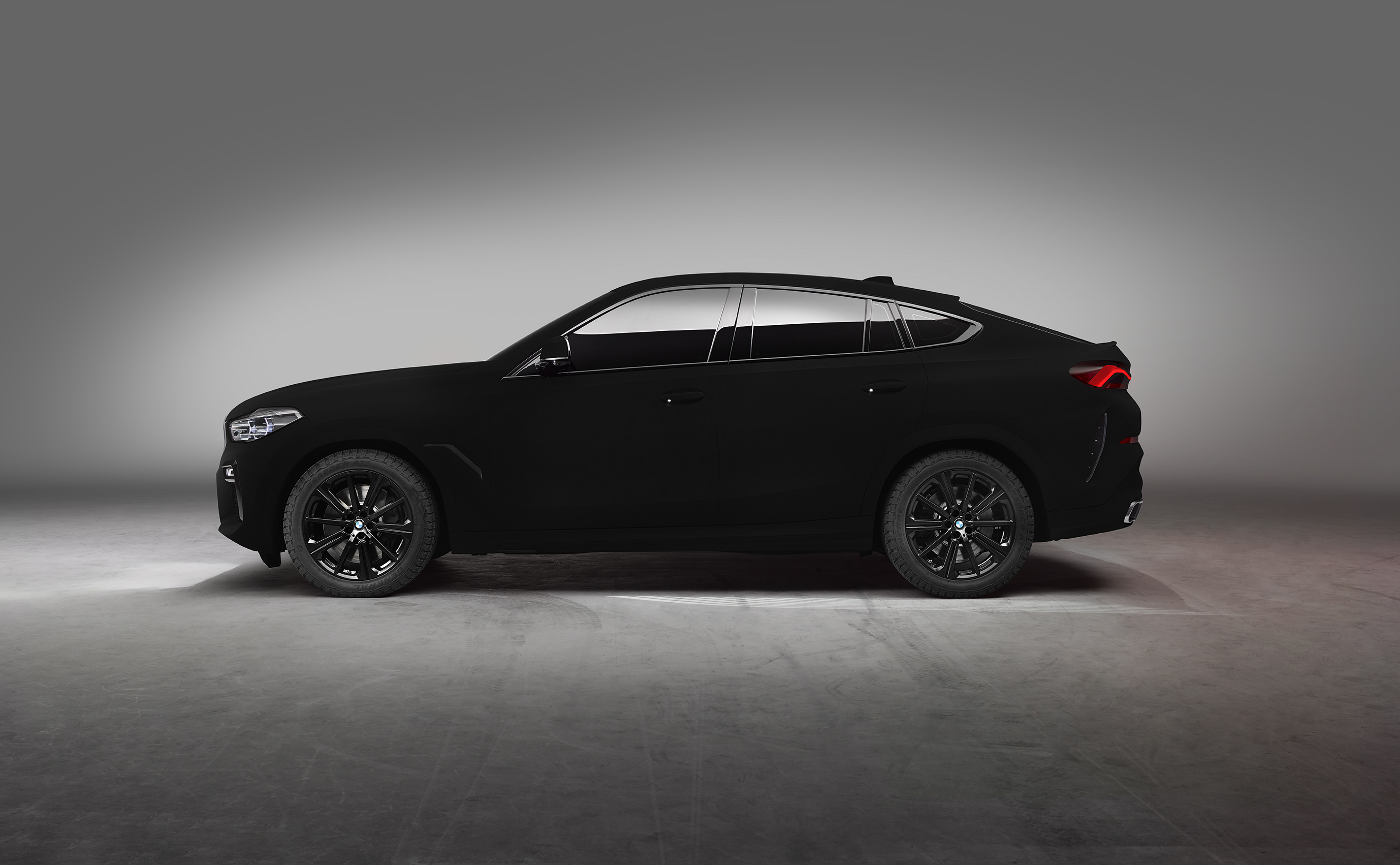 Remember the bit above about manipulating light waves? Paint can be manipulated for different colors and effects, but taking this to the extreme is Vantablack. Instead of pigments, Vantablack is a coating of carbon nanotubes arranged vertically to the coated surface. Instead of reflecting and refracting off the surface, the light waves are “trapped" and deflected among the tubes, with the panel eventually absorbing over 99.9% of the light as heat. The result is surreal. 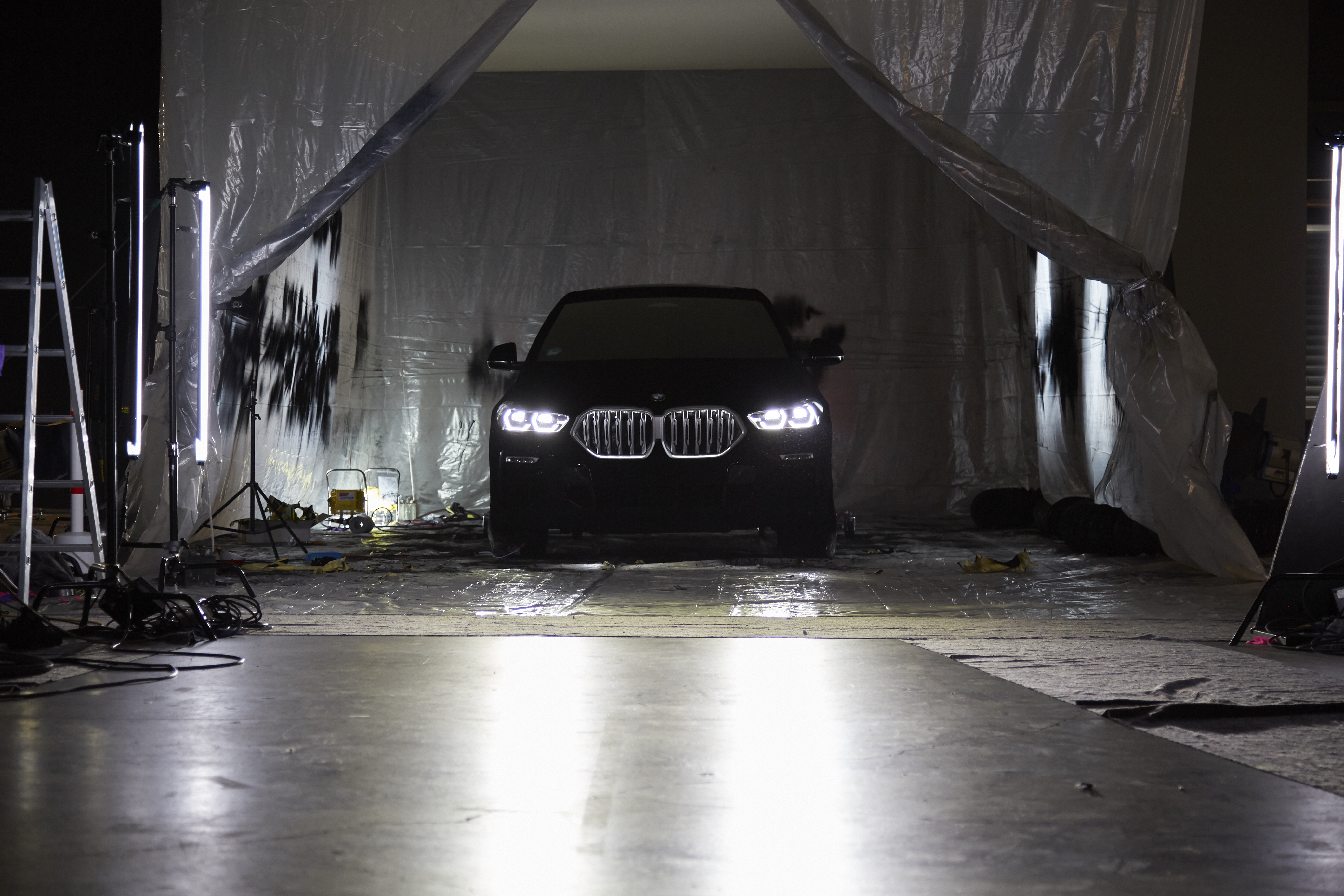 BMW promoted an X6 covered in Vantablack in 2019, and rather than just looking like the blackest car paint, it looked like a bad render in Photoshop. The SUV not only had no shine, but no visible surface features (cue that famous first picture of a black hole).

Possibly even cooler on the show circuit is the prospect of digital car paint. At the flip of a switch, an electrical current charges through the “digital," or paramagnetic paint, changing its color at the speed of light. It's a cool idea, but paramagnetic paint is currently only available to transform your ride through apps, like a digital version of touch-up paint, but it could work in real life. Electroluminescence provides a similar, but very limited effect in digital instrumentation. In the future, you may be able to change colors just by selecting a color in the vehicle's menu.

How to take care of paint

All that is cool stuff, but it's important to remember that paint isn't just for decoration—it also provides a protective layer. Originally it kept your steel body from rusting, but now the clear coat and base paint layer work together to prevent damage from UV rays or road grime. You need to take care of it, either for pride or resale value.

Follow a cleaning regimen, or at least wash the crud off your vehicle with a good quality car wash soap. Follow up with wax, ideally every other month, or at least quarterly. If you're feeling ambitious, a clay bar makes an incredible difference, and you only need to do it about once a year. You can go all out and use automotive polish and a polisher for a dramatic show car finish, but it's difficult to maintain in a daily driver. That's where trips and tricks like the California Car Duster and detailing spray wax come into play. Just a few minutes and your ride looks great again.

What do you use to maintain your paint? Let us know your favorite products in the comments below.

Top Projects To Do While Your Car's In Winter Storage

Top 5 Cleaning Products For Both Car And Home

How To Fix Your Car Window

How to Fix Peeling Clear Coat