The Most Fascinating Post-WWII-Era Concept Cars

They were weird, wild and bold—and came from a time of wild post-World War II optimism, when it seemed that in America anything was possible and nothing was beyond reach. They were inspired by fighter planes and missiles and spacecraft, and, while they weren't ever intended to make it to production, they showcased technologies and features that are familiar in today's vehicles. They were extravagant and often downright strange, exercises in style and engineering when design departments had a blank check and stylists would build mock-ups, starting with a sketch pad and moving on to a wooden buck and modeling clay. General Motors even promoted its cars on the show circuit with short films that were utter flights of fancy (and are fascinating viewing).

They were concept cars.

Here, we're taking a look at some of the greatest concept cars and the features they brought forward, starting with: 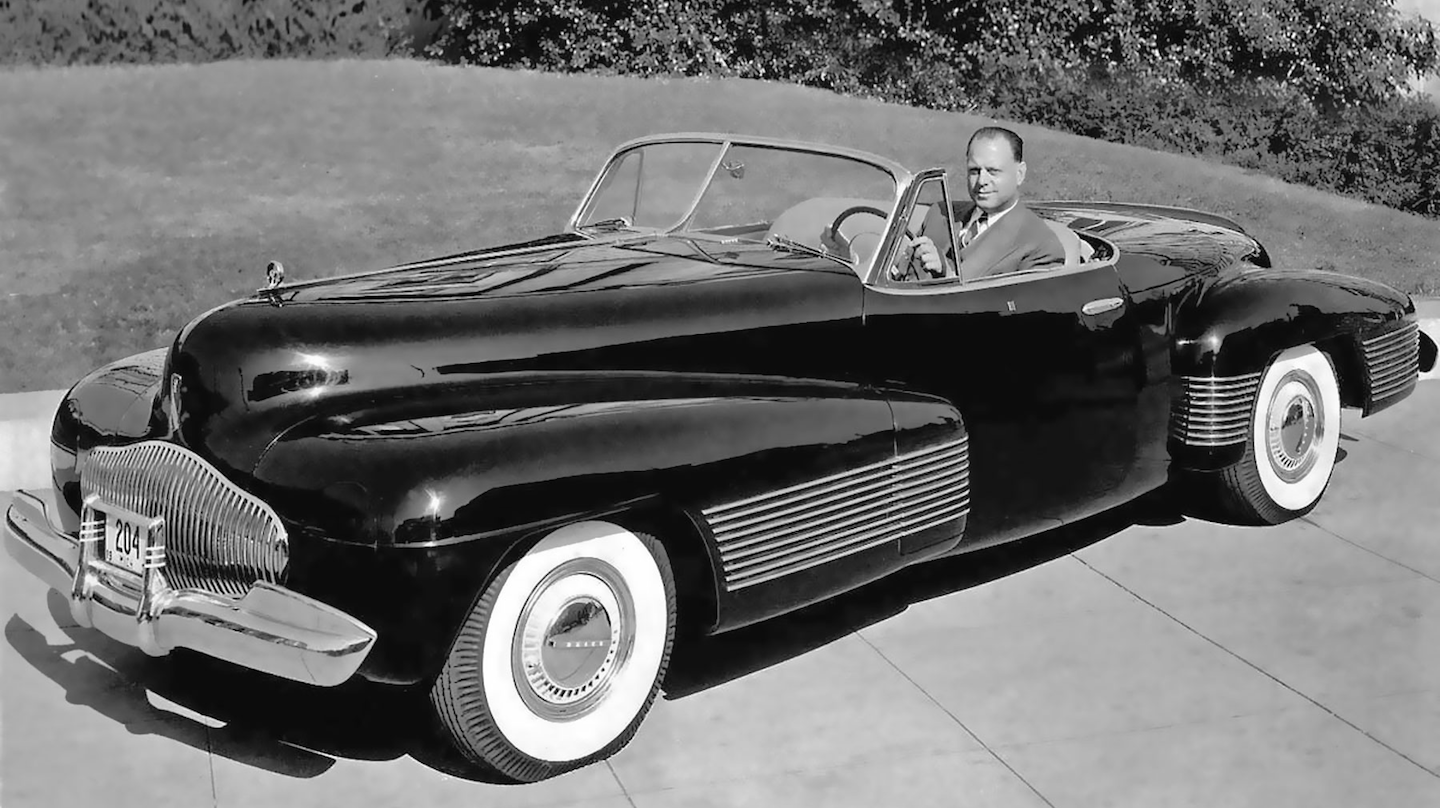 Produced by Buick in 1938, the Y-Job was the industry's first-ever concept car. It was a long and low roadster, with styling that presaged post-WWII and early '50s Buicks like the Special and Roadmaster. The Y-Job was built on a Buick Super chassis but featured flowing lines and features like a gunsight hood ornament, electric windows (a first), electric convertible top (a first), power-operated hidden headlamps, flush door handles, wraparound bumpers, curved one-piece windshield, prototype Dynaflow transmission (a first) and a longer, lower, wider stance than just about anything on the road. GM stylist Harley Earl made the Y-Job even lower by using 13-inch wheels and, unusually for concept cars, made the Y-Job his daily driver until the early 1950s. This one-off rolling laboratory still exists and is in running condition. 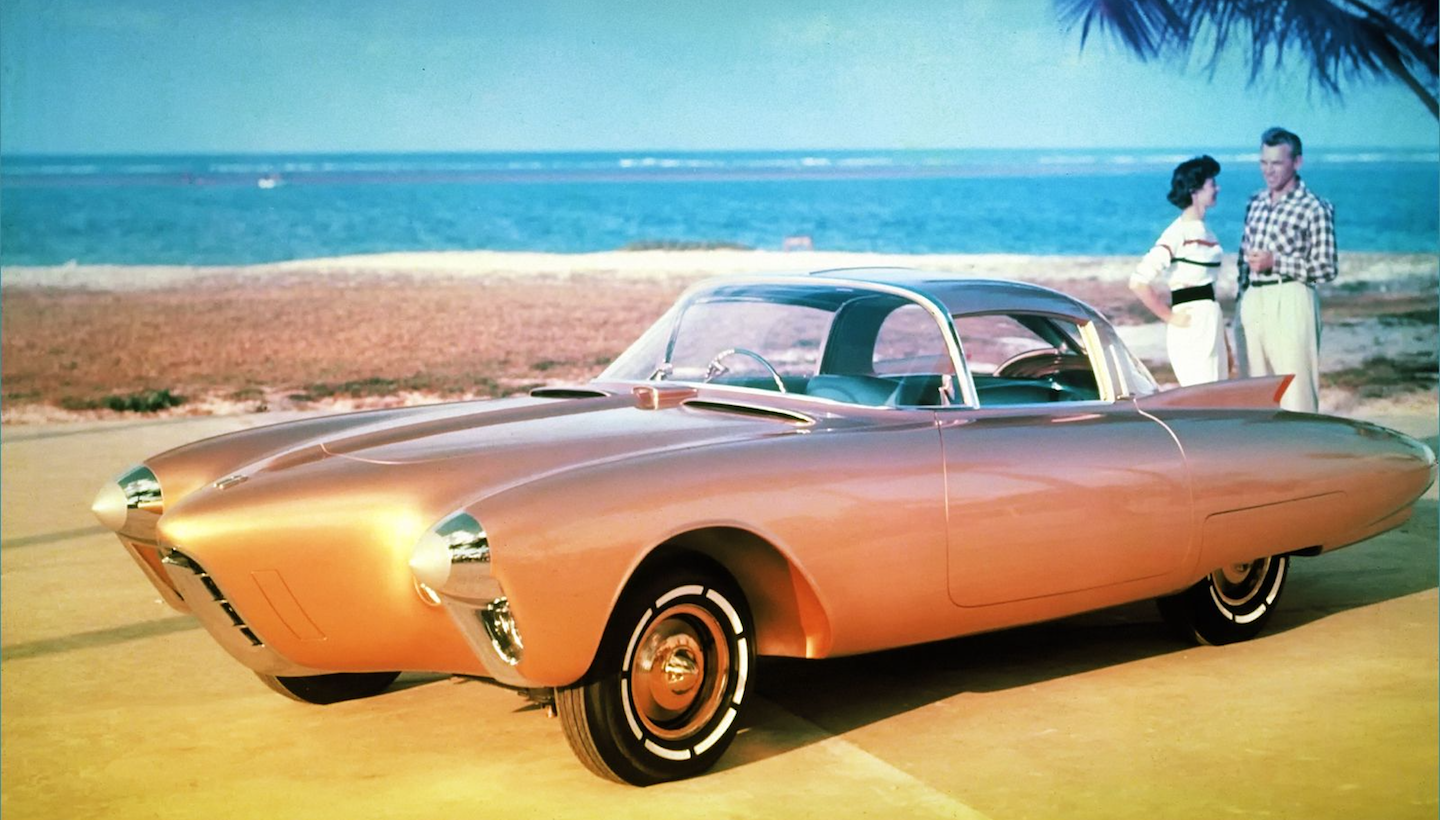 Oldsmobile was an unusually forward-thinking GM division in the '50s, and the Golden Rocket concept car was a truly ambitious exercise. It was a wild design, with a shark nose, fiberglass body, gull-wing roof panels, and a 275 horsepower, 235 c.i. V8 with a curb weight of a svelte 2,500 pounds. Inside, the Golden Rocket featured a power-tilt steering column and power seats that raised up and swiveled outward when the doors opened. It was fitted with blue and gold upholstery, with the speedometer in the center of the steering wheel, and was revised several times over the years.

Ford brought in Italian coachbuilder Ghia for this concept car. It featured a hooded headlight profile that would make its way onto '50s Lincoln and Mercury models, as well as graceful angled tailfins and a clear plastic bubble-canopy top (that would no doubt cook the occupants in minutes). It was powered by a 368 c.i. Lincoln V8 and featured much of the running gear of Lincoln's Continental Mark II. If the Futura looks familiar, there's a good reason—customizer George Barris ended up with the car and converted it into the Batmobile for the 1960s "Batman" TV series.

Another Ghia collaboration, the Dart/Diablo used the chassis of the '56 Chrysler 300; its hood tapered to a low, oval grille, with clean body lines and fins that were fairly modest for the time. The final rendering of the Dart/Diablo was very aerodynamic—the fins actually enhanced its slippery shape, unlike other monster tailfins in the '50s. It was originally conceived with a retractable hardtop that could be configured as a sunroof, landau, or convertible, but it was was eventually refitted for a conventional fabric convertible top. Under the hood, it featured the 375 horsepower, 392 c.i. V8 that was in the Chrysler 300 of the time.

The Aurora wagon wasn't too outlandishly-styled—it's pretty easy to see its roots as a Ford product in its body lines—but it was loaded with advanced features. Its “electro-luminescent" side panels glowed and served as running lights when the Aurora was driven, while up front the conventional two- or four-headlight lighting setup was replaced by a bar of a dozen 1-inch sealed beams, sunk low in the grille.

Inside, the Aurora featured a special bucket seat for the driver, with an aircraft-inspired handlebar rather than a wheel (and only needed a half-turn to go from lock to lock). The front passenger seat could swivel around backward, and the rear seat curved around like a sectional couch. In back, there was a “romper room" for kids, complete with toy storage, and a glass partition that the adults could use to isolate themselves when things got too noisy, with AM/FM radios front and rear, and even a TV for the rear passengers. One of the Aurora's most intriguing features was a GPS of sorts: a map cartridge that could be inserted in the dashboard and would scroll along in a window, synced with the odometer to show progress and location on a road trip! 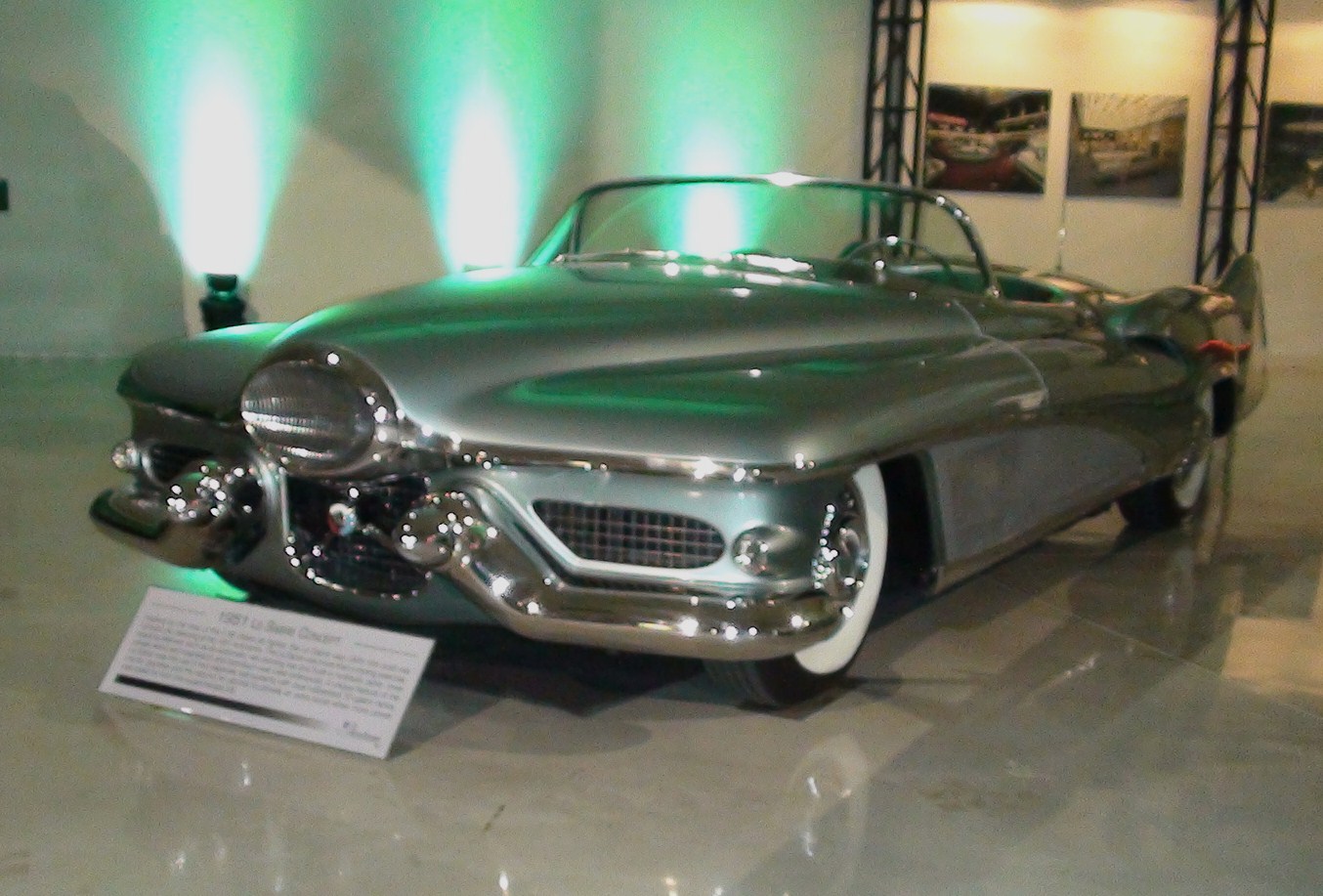 The '50s were really off and running with this concept car offering from Buick. Its grille suggested a jet fighter's air intake, and its tailfins and single center taillamp were aircraft-inspired as well. Under the hood, it had an aluminum supercharged V8 that put out 335 horsepower (unheard of for 1951) and a radical rear-mounted automatic transaxle. Harley Earl also owned this car and used it as a daily driver, putting 45,000 miles on it. 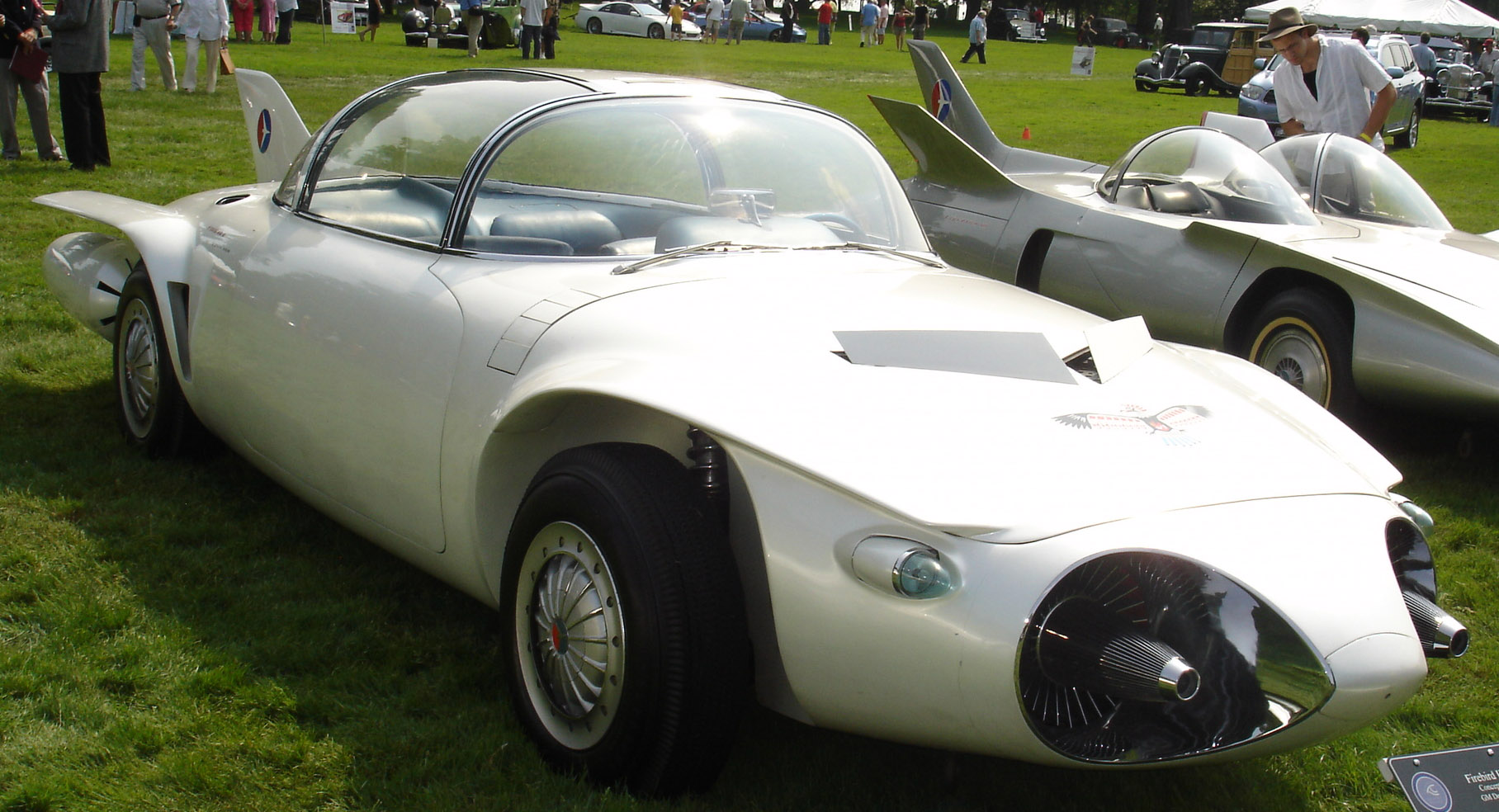 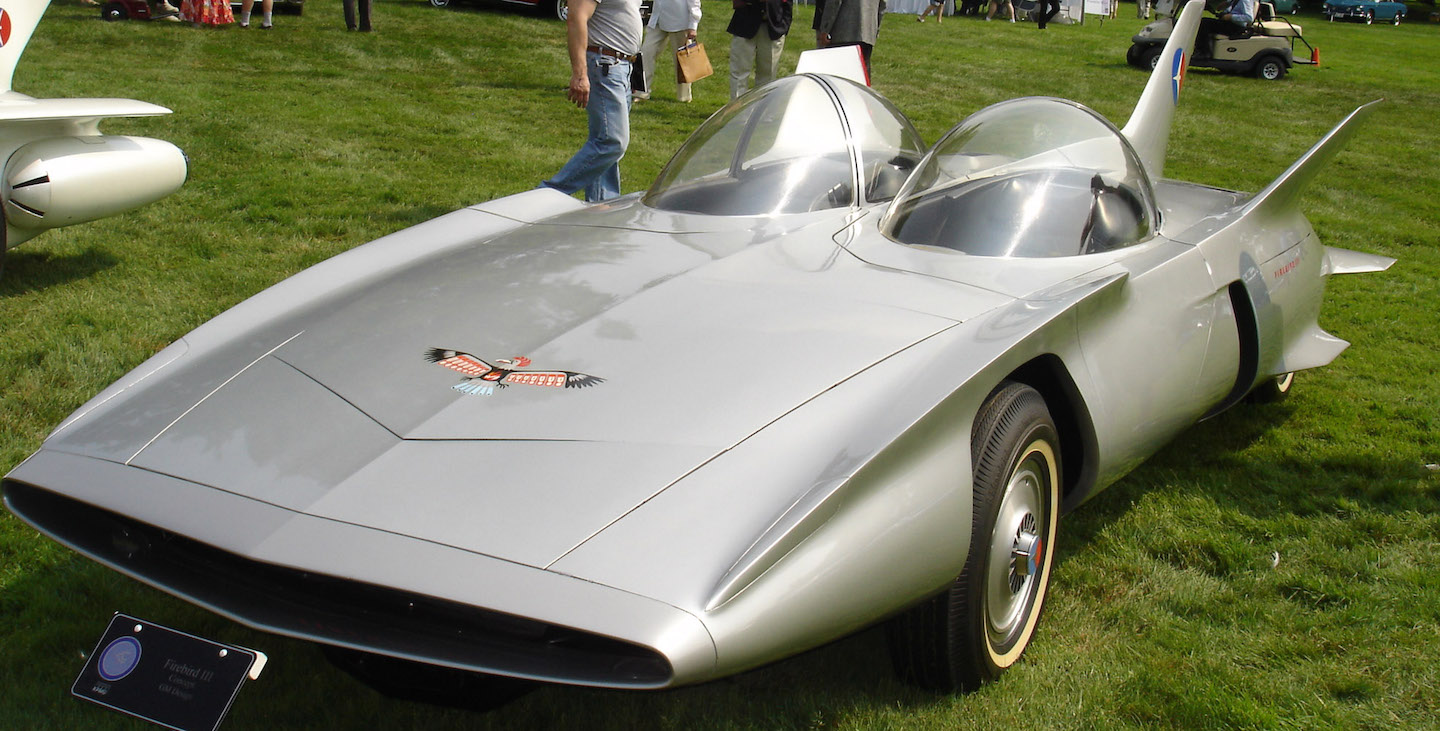 Long before the Firebird name was used for a production model, GM produced several Firebird concept cars that were some of the most ambitious ever. In 1953, the Firebird I was developed and was essentially a missile with wheels and a bubble top, complete with wings, a tail, and aircraft-style flaps for braking. The gas-turbine-powered Firebird 1 featured a fiberglass body and brake drums on the outside of the wheels for cooling.

In '56, the Firebird II came along, with a fighter plane-style bubble canopy top and four seats. It was also gas-turbine powered, with a regenerative exhaust that kept the engine nearly 1,000 degrees cooler (extreme heat was a major problem with gas-turbine engines). Firebird II was featured in a GM promotional film that envisioned self-driving cars that followed wires embedded in roadways, with district “traffic controllers" in tall towers issuing directions to drivers! As the film says,"Suddenly, it's 1976!"

The Firebird III, debuting in '58, took the previous concept cars' ideas to their logical conclusion. It featured a severely tapered front end, jet fighter-style, a double-bubble canopy for the occupants and no less than nine fins in back, including one tall fin right in the middle. It was lighter in weight and still featured the gas turbine engine, but required a separate small gasoline engine to power the air conditioning, self-leveling suspension, power steering and other accessories. The driver controlled the car with a joystick (no info on how well that worked!), and its wild styling influenced late 50s and early 60s Cadillacs.

As absurd and impractical as the Firebird series concept cars were, consider their innovations: rear-facing camera, cruise control, antilock brakes, computerized drive-by-wire input from the driver and many more. They're the perfect example of how concept cars were used as testbeds to roll out new bleeding-edge engineering features long before they were mass-marketed. 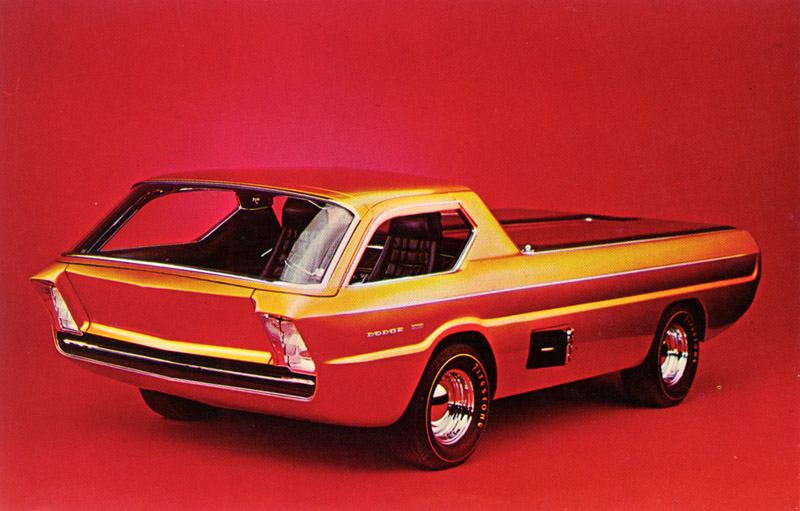 Any collector of Hot Wheels cars will recognize the Deora—it was based on the Dodge A100 pickup and debuted at Detroit Autorama in 1967. Designer Harry Bradley moved the truck's slant-six engine rearward 15 inches into the truck bed and adapted the back hatch of a '60 Ford wagon to serve as the windshield. Entry to the gold-painted Deora came through lifting the windshield and opening the lower gate—the steering wheel would pivot out of the way as the gate swung and the driver entered from the front. The Deora may not have been as radical as some concept cars, but its futuristic look spoke of surfboards and rock 'n' roll (and made it a perfect Hot Wheels car).