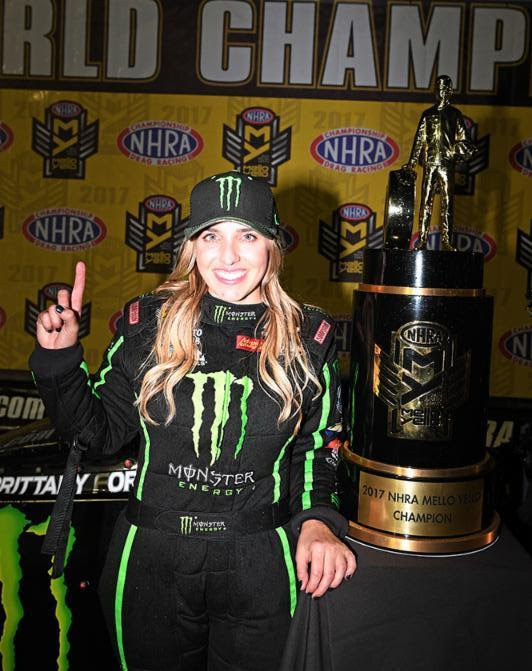 Brittany Force, 31, driver of the Advance Auto Parts Monster Energy Top Fuel dragster, finished the 2017 season in dramatic fashion by clinching the championship on the last day of the season after racing to four final rounds with three wins during the Countdown to the Championship playoffs. She also won the season ending Auto Club Finals after qualifying No. 1 and holding off veteran Top Fuel racer Steve Torrence for the championship crown.

“It's an honor to be nominated as Best Driver with my Monster Energy team after our 2017 NHRA Championship season,” Force said. “It's incredible to just be recognized alongside some of motorsports greatest drivers like my dad, Josef Newgarden, Tony Stewart and Jimmie Johnson. It would be amazing to be the first female and NHRA driver to win this award, but I'm proud just to be nominated. It really goes to show what this Monster Energy team accomplished last year.”

Joining Force on the 2018 ESPY Best Driver ballot are NASCAR driver Martin Truex Jr., IndyCar driver Josef Newgarden, who is a teammate of sorts of Force's with Big Machine Records, and Formula One driver Lewis Hamilton.

The ESPY Awards, acronym for Excellence in Sports Performance Yearly, were created by ESPN in 1993. Sports fans can vote for Force and their other sports heroes in variety of categories via an online poll at: ESPN.com/ESPYS. Voting is underway and concludes at 9 p.m. (ET) on July 17. Fans can vote once per day.

The 2018 ESPY winners will be announced on July 18 at 8/7 p.m. central on ABC or watch broadcast live on Watch ESPN.

* Has raced to 8 Top Fuel victories

* Has claimed nine No. 1 qualifying awards

Getting to Know John Force