It's been a few years since we had an honest, affordable truck. Sometime in the last decade, the Silverado gained a power sunroof and Wi-Fi, Dodge decided to make the Ram compete with luxury car interiors, and the F-150 could be optioned north of $80,000. With “midsize" trucks like the Colorado the same size as a Silverado from 20 years ago, there just doesn't seem to be a simple work truck anymore. Unless you shop the used market for a Dodge Dakota.

The Dakota is far more than just the Ram's little brother. Depending on the generation, the midsize truck delivered style, performance, and utility for a price that was hard to beat. Dodge named their new truck after the states, a Siouan word meaning “friendly." For 25 years, this was the truck that was friendly to your budget, and easy to drive. The Dodge Dakota is the simple, but cool, work truck that you still want. 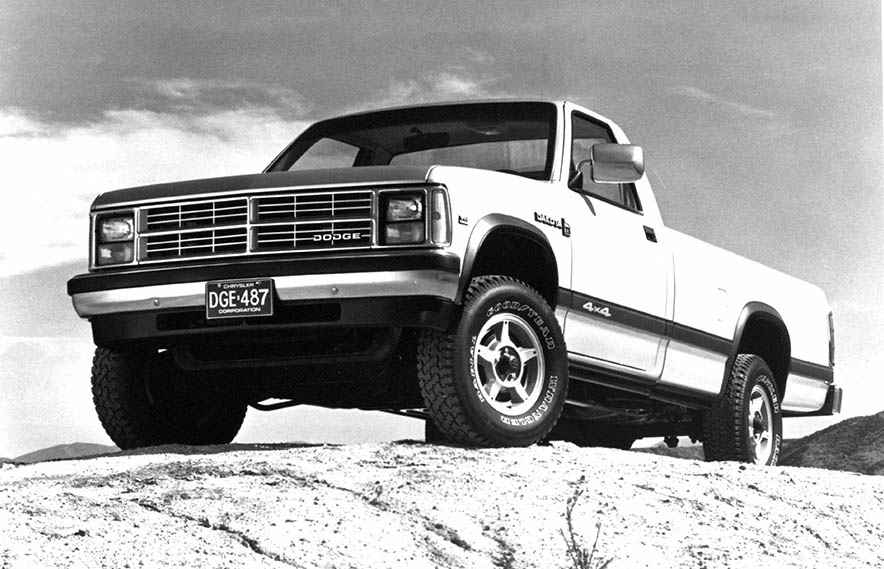 To understand why Dodge didn't have a midsize truck until the late 1980s, we'll have to step into our DeLorean time machine. Following multiple gas shortages in the 1970s, buyers wanted fuel efficient vehicles, even for their trucks. Dodge had imported the tiny Mitsubishi Triton as the rebadged Ram D-50, much as the competition was doing with the Chevy Luv (an Isuzu), and Ford Courier (a Mazda). However, leadership saw the massive size difference between the D-50 and the full-size Ram, and figured there was a lucrative market in between. They were right.

Nineteen-eighty-seven to the mid-'90s is a huge first generation run. During that same time, pop music went from Rick Astley to the Spice Girls, and yet the Dakota was a strong seller, regularly passing 150,000 units per year. Unlike Ford Ranger, Chevy S-10, Nissan & Toyota pickups, the Dakota was designed as a midsize, meaning more functional space in the cab, and a cargo bed able to handle 4x8 plywood or sheetrock. That's brilliant for the time, but it wasn't all fun and games as Dodge did the '80s Dodge thing and went the cheap route. The Dakota was built from the parts bin, sharing many components with other vehicles, including economy cars. The specs are ancient by today's standards: a carbureted 2.2L making 96 horsepower, a three-speed automatic transmission, AM/FM radio (no cassette player), and 14" wheels. Ironically, the Dakota's major claim to fame was introducing the world's first V8 engine in the midsize class. The 5.2L (318 CID) made only 170 horsepower, but that was competitive for the era, and much more than the competition's four bangers.

Interesting models from the first generation include the convertible, and the Shelby Dakota Sport. The Dakota convertible is exactly what you're thinking, with a manual-folding vinyl roof. It looked awkward and buyers ignored it like a Milli Vanilli concert, so it's a rarity today. The Shelby Dakota Sport was a 1989 only specially-tuned truck from none other than Carroll Shelby. It was the lightest configuration (short bed, standard cab), with the largest engine, and special body work and wheels. It still looks good today, but good luck finding one for sale. 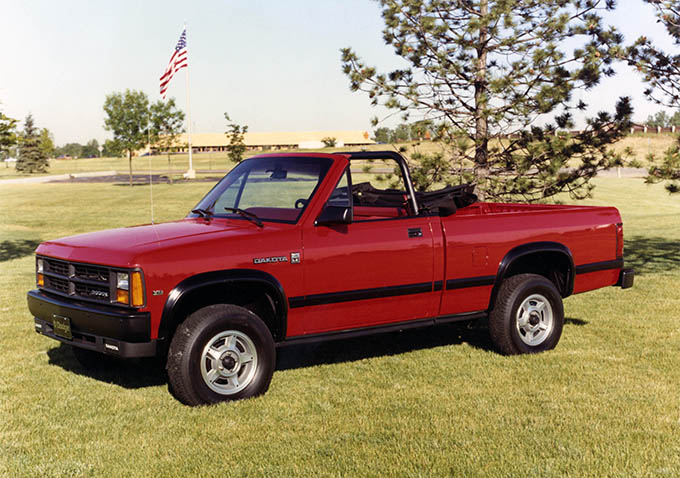 During the time Dodge planned the second-gen truck, grunge took over the air waves, and the simple-but-louder theme reflected in the '90s Dakota's styling. The midsize adapted the Ram's “semi-truck" styling, and gained useful features like the option of four doors. The roomy interior and big V8 made waves in the class, with the biggest engine — a 5.9L (360 CID) — making a respectable 250 horsepower in the R/T package.

Due to lack of demand after years of cheap gas, the 2.5L four cylinder was dropped in 2002, ending the last run of the AMC straight-four engine. The second-gen Dakota brought a nice ride too, due to an unequal-length upper/lower control arm and coil spring suspension (similar to the Camaro of the era) in front, and independent torsion bar setup out back. It wasn't all car-like though, and was stuck with the heavy-duty work suspension of the time, a solid axle and leaf springs. MotorTrend noted the “exceptional crispness and poise" thanks to rack & pinion steering, saying: “The resulting high-speed behavior is confidence-inspiring and closer to that of a taut rear-drive coupe than you'll believe until you try it." With the 235-horsepower 5.2L V8, a five-speed manual sending power to the rear wheels, and a curb weight of around 3,500 lbs, performance-wise it was essentially a Mustang GT with a bed. 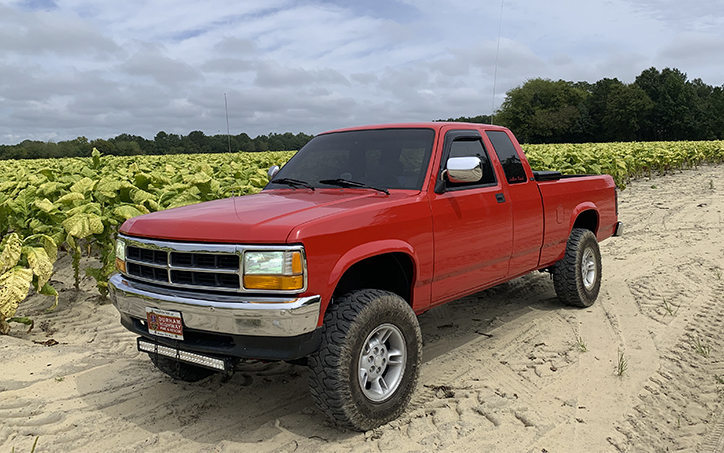 If the second-gen Dakota worked by offering a little bit more, Dodge figured the third generation would offer a lot more. Starting in 2005, the Dakota was four-door only due to buyers shifting away from two-door trucks. This generation saw smaller engines, with the top choice a 4.7L Magnum V8, but tech developments allowed horsepower to noticeably increase, up to 310 hp. Dodge read those previous “car-like ride" reviews and ran with it, building quietness into the cabin through thicker glass and sound deadening material, and a heavier duty frame. The result was a nicer place to drive and work, but at the cost of increased price and gas consumption. Having a 7,100 lb payload capacity equal to the full-size Tundra was nice, but not when a Dakota averaged only 15 MPG unloaded. A 2008 facelift to the Dodge Nitro-style grille didn't slow the sales loss, and the end was in sight as the housing market crisis crashed demand for trucks. 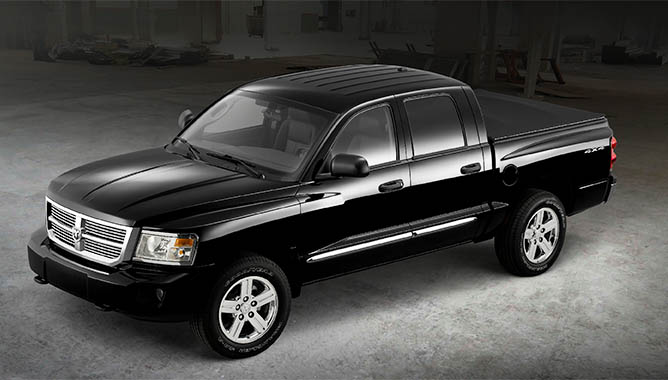 End of the line

At first glance, it seems like the recession killed it, but Dakota's production numbers had been falling since a high in the year 2000 as buyers switched to even larger full-size trucks. Initially, Dodge's strategy of increasing size made sense to chase what buyers were after, but it seemed to take it too far. From first to third generation, the Dakota gained four inches in height, 10 inches in width, and almost three feet in length. Owners think Dodge charged too much for the mid-size, making the increased capability of the Ram at the same price point a no-brainer. Clearly not helping things, some marketing genius came up with the idea to move trucks away from Dodge under their own Ram brand in 2010. So the Dodge Ram 1500 became the Ram 1500, and the Dodge Dakota became the Ram Dakota. Hopefully that person was fired.

Just after the Dakota ended production due to supposed lack of interest in midsize trucks, the Colorado received a massive update for 2012 and sales took off, with Chevy seeing their best sales numbers in a decade. Ford saw this and brought the Ranger back after a seven year hiatus, selling better than 12 years prior. The class-leading Toyota Tacoma consistently averages over 150,000 a year, and sold a quarter million in 2018. There is demand for a well-done midsize pickup relevant to the buyers of today. Dodge is looking for vehicles that will make a profit, which is why competing in this profitable segment makes sense. We'll just have to wait and see if they do it.

As for a wish list: The 3.6L Pentastar V6 would be a good all-around choice, matched to a six-speed manual or eight-speed auto. The 5.7L HEMI could stand in for an R/T edition, with a 100 horsepower increase over the old one. Since diesel is the trend for smaller trucks right now, it needs the option of a 3.0L EcoDiesel. And of course, keep the price far below $30,000.

Can't wait for a brand new Dodge Dakota? Look around online and you'll find plenty of them selling for under $3,000, which makes for a great buy as a project truck to restore or use for work.

Which generation Dakota is your favorite? Or would you shop the competition? Let us know your favorite midsize truck in the comments.