From timeless icons to everyday essentials, Crucial Cars examines the vehicles we can't live without. In this installment, we look at the feature-rich Chevy Tahoe. 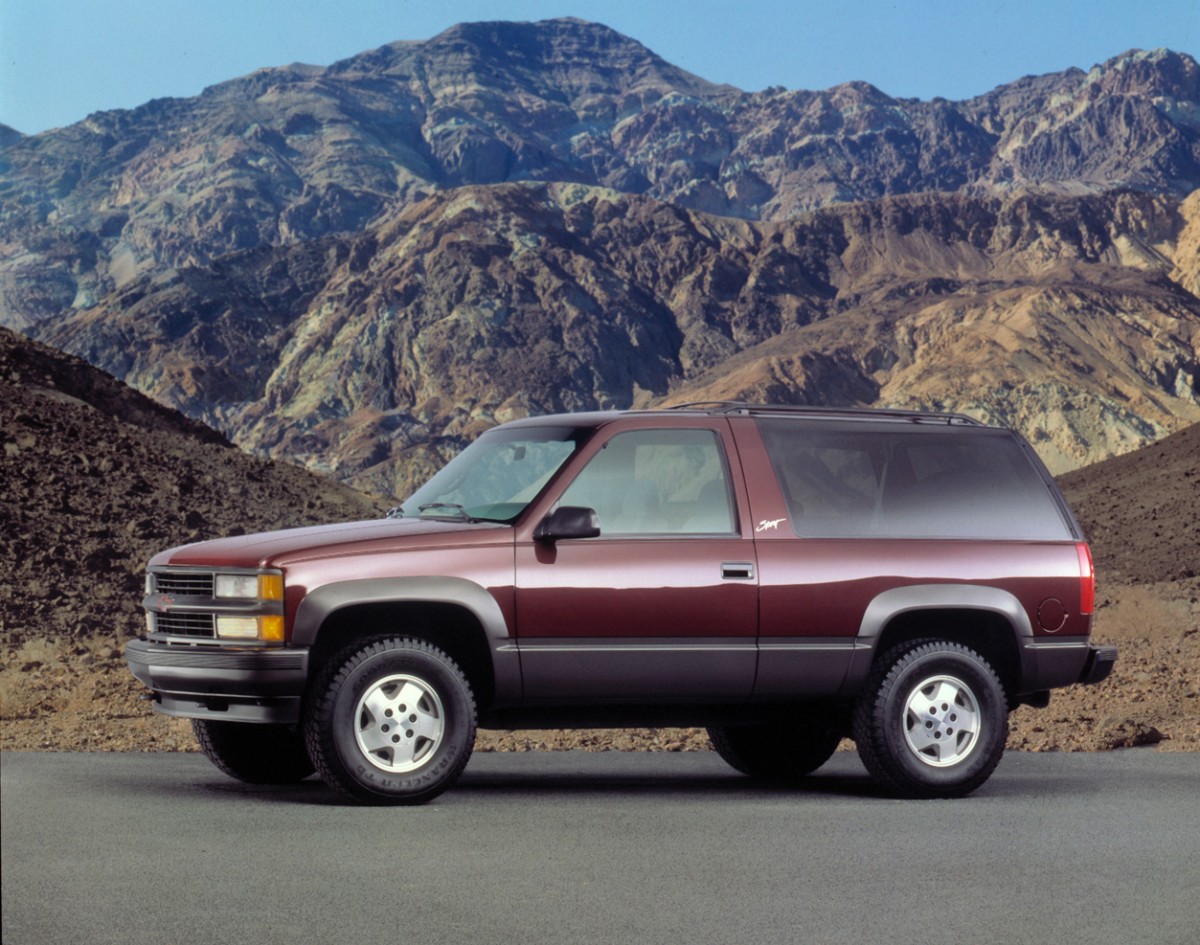 This first-gen Chevrolet Tahoe (1991-1999) is usually traced back to 1995 when it was officially introduced, but it's actually four years older.

Originally the Chevy Blazer, the Tahoe was a full-size, two-door SUV, introduced as a four-door in '95 — named after the rugged and scenic area around Lake Tahoe, at the border of California and Nevada. This name was perfect for this any-road vehicle featuring Chevrolet's 5.7 L (350 cu. in.) LO5 small-block V8. A turbocharged 6.5 L (395 cu. in.) Detroit Diesel V8 was available beginning in 1994.

Shorter than the Suburban, on which the Tahoe/Blazer was based, it shared the Suburban's GMT 400 platform and was built on a truck chassis based on the one used in the full-size Silverado pickup truck. Weighing in at roughly 4,500 pounds for the two-door and 5,500 pounds for the four-door, these vehicles were large and in charge. Even better, they could seat up to nine passengers.

The Limited was based on the Tahoe SS concept made in 1996 and only produced in a black onyx metallic paint. Its unique look was thanks to the factory equipped, monochromatic bumpers and grille painted with the same paint. In addition, the roof rack was removed while fog lamps were integrated into the front bumper, giving this Tahoe individuality from its predecessor. 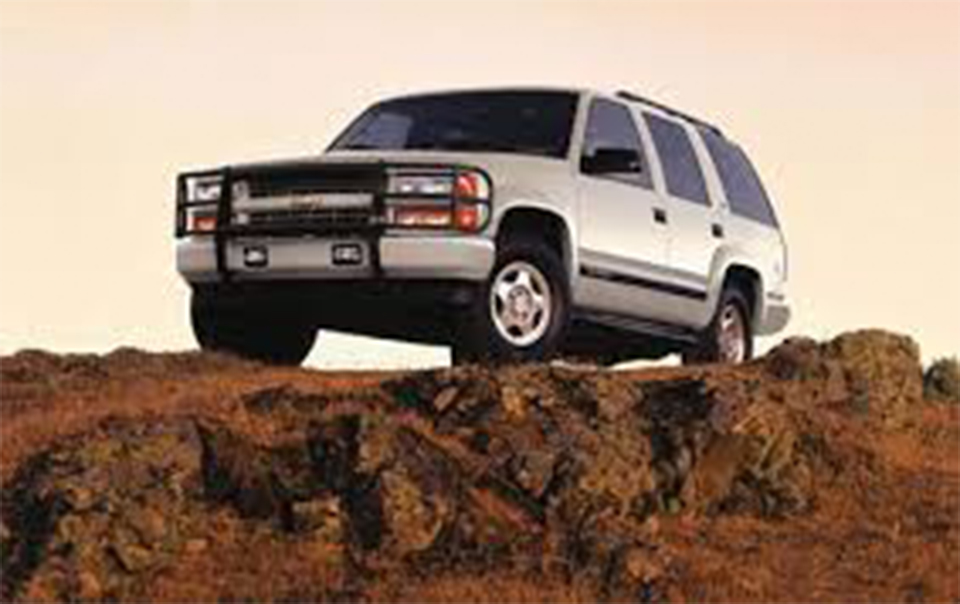 Two new engines replaced the old 5.7 L (350 cu. in.) small-block V8, and while smaller, both produced more horsepower but less torque. Both the two- and four-wheel drive models went through pretty significant updates in 2000, including differentiated grilles and headlights, as well as interior updates, such as new seats, dashboard, and door panels. In 2003, all GM trucks underwent an interior upgrade, which included new steering wheel and radio controls, and other enhancements made with better quality materials.

This year was also the birth of StabiliTrack stability control, as well as XM Satellite Radio, Bose audio, and DVD systems. Both engines received more 10hp for 2003 and 2004. 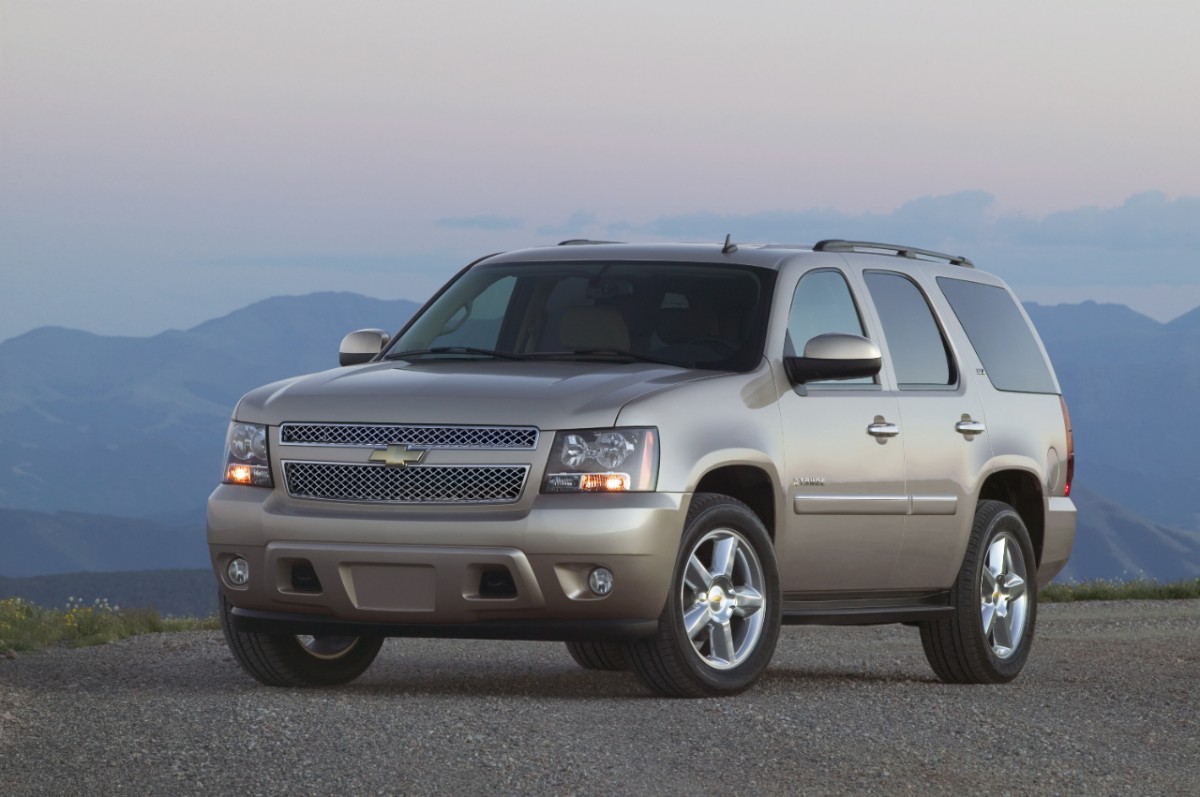 For the 2007 model year, GM redesigned the Tahoe on the new GMT900 platform. A hybrid version of the Yukon followed for 2008. The GMT900 sold surprisingly well despite the market weakening, as far as SUVs were concerned.

This model year saw different front fascia, hood, and taillights. The Tahoe grille was divided by a body-colored bar similar to the chrome bar found on most GMT800 Tahoes. The more angular design gave the Tahoe an upgraded, sophisticated feel as compared to previous models. And that sophistication continued inside the vehicle as well with a real wood-trimmed dashboard featuring new chrome accented instrument controls. New door panels and seats were also added to the interior, maintaining the nine-passenger seating availability on LS and SLE models.

Improvements were made to more than just appearance. In 2007, GM managed to increase the fuel efficiency of the Tahoe from its former 19 miles per gallon to an impressive 21-22 mpg thanks to the addition of Active Fuel Management cylinder deactivation.

In 2009, a 395-horsepower, 6.2L engine was added as an option to the Tahoe LTZ ,and a six-speed automatic transmission replaced the four-speed on all trucks except 2WD models with the 4.8L engine.

Kelly Blue Book voted the 2015 Chevrolet Tahoe The Best Buy of the Year among full-size SUVs. Car and Driver named it the Editors Choice in Full-Size Crossovers/SUVs, and the Texas Auto Writers Association selected Tahoe as the Full-Size SUV of Texas (doesn't it go without saying that everything in Texas is full-size?) at the Texas Truck Rodeo. The Tahoe had impressive numbers to go along with those awards and accolades, too. Tahoe sales increased 88 percent in January of 2015 compared to the same time period the previous year.

Fast forward a few years and you'll find that the 2019 and 2020 model year Tahoes are stylish, comfortable, upscale, and still tech-heavy in the cabin, including 14 charging stations – seven of which are USB-charging ports – and an available wireless charging pad (more on that later).

The Tahoe is versatile, with removable second-row seating and a power, fold-flat third row. It's also quiet, thanks to noise-dampening material throughout. These good looks and creature comforts are balanced with muscular performance delivered by a 5.3L V8 engine churning out 355 HP, or a powerful 6.2L V8 on the Tahoe RST and Premier Plus Editions. Even with all that power, the 5.3L version still delivers 22 mpg on the highway—enough to earn Tahoe the Best-In-Class V8 Highway Fuel Economy accolade.

The awards don't end there, either. The 2019 Tahoe also earned JD Power's Highest Ranked Large SUV in Initial Quality recognition, and the 2018 Kelly Blue Book 5-Year Cost to Own award, which factors in out-of-pocket expenses and depreciation.

In an effort to give everyone something to like, Chevy makes the 2020 Tahoe available in three models – LS, LT, and Premier – and five versions, each with a whole host of options.

In the 20-plus years since Tahoe's debut, consumer demands and tastes have evolved, as has vehicle technology – so much so that today's Tahoe bears little resemblance to its first predecessor, other than its name.

A quick look inside Tahoe's interior leaves little doubt what's front and center on consumers' wants and needs list, and it's not just cup holders. As mentioned previously, drivers can't live without their electronics, and with Tahoe's amenities, they won't have to.

Available 4G LTE Wi-Fi Technology accommodates the simultaneous connection of up to seven devices so every passenger remains connected, even on the road. All those devices need power, which they'll have no trouble finding, thanks to numerous charging stations (airport waiting area planners, take note) as well as the availability of wireless charging and a three-prong, 110-volt outlet for laptops and larger devices. There's also Bluetooth capability that can attach devices with Chevy's MyLink system, while controlling MyLink is accomplished with the swipe of a finger on an eight-inch, color touch screen that features customizable icon locations.

Hidden behind the touch screen is a secret compartment for storing small items, accessible only by entering a password on the screen. Yes, Tahoe has class and style, right down to its instrument cluster, which Chevy describes as being “designed after high-end watches."

When Tahoe drivers need to haul something other than precious human cargo, there is 94.7 cubic feet of cargo space, and second and third-row seats that fold flat. Chevy also boasts that Tahoe has “the fastest power-release second-row and power-folding third-row seats of any competitor."

In addition to a hands-free liftgate that opens with a gentle kicking motion thanks to a sensor hidden under the rear bumper, the Tahoe also features keyless entry as well as starting, bringing the engine to life with just the push of a button. Passengers will have difficulty hearing that engine, or any other external noise for that matter, as Chevy claims this is “the quietest Tahoe ever." Sound-dampening material has been added in the engine compartment, wheel liners, dash, and floor, and there's an “acoustic-laminated windshield" along with triple-sealed inlaid doors to further block sound.

Heavy-duty illumination lights up the night in the form of projector-beam headlamps and rear LED tail lamps, with high-intensity discharge (HID) lamps available on the LTZ model.

Fuel economy is still top of mind for most drivers, and Tahoe delivers about what you'd expect for a vehicle of this size – the EPA-estimated fuel economy of 16 mpg around town and 23 or 22 – depending if you're piloting the two- or four-wheel drive version, respectively – on the open road.

A 26-gallon fuel tank feeds the 5.3-liter EcoTech3 V8 that features active fuel management by taking four cylinders offline when their power isn't needed. You'll also get direct injection for more power, fuel efficiency with reduced emissions, and variable valve timing for maximum power and efficiency. All this engine technology is capable of towing up to 8,600 lbs. And, let's not forget what's most important: safety.

Chevy calls it “the most advanced Tahoe ever," and they're not kidding.

The Tahoe's all grown up and has class, style, and something for nearly every driver's needs.

What do you like about the Tahoe? Let us know in the comments.

Rich Ellis is a DIYer who’s worked in and written for the automotive industry for nearly two decades. He uses his experiences, lessons learned, and interest in maintaining and fixing vehicles on his family’s small farm in his writing.