How Does a Car Water Pump Work?

The water pump's name is a throwback to motoring's early days when engines were cooled by water alone, unlike today's vehicles that use a mixture of water and antifreeze. What hasn't changed is the water pump's importance in preventing the engine from overheating, making it a crucial component of a vehicle's cooling system. Here's how it works and why replacing it could be a money-saver.

How a Vehicle Cooling System Works

How a Radiator Works

How a Thermostat Works

How the water pump works to cool the engine

Whenever internal combustion engines are running, they're generating heat (and a lot of it) with temperatures under the hood soaring to more than 200 degrees. Once an engine reaches optimal operating temperature, that excess heat has to be removed to prevent the buildup of high temperatures that will cause engine damage. This is where the water pump comes in. It sucks antifreeze from the radiator and circulates it through and around the engine. That engine heat is transferred from the engine block to the antifreeze, which then flows back to the radiator where it's cooled, and the process begins anew.

On most vehicles, the water pump is driven by the engine's serpentine belt, which is connected to the pump's pulley. The pulley and belt work together to move coolant through these steps:

Most water pumps also have a weep hole that allows a small amount of coolant to seep out of it. However, if you see a constant flow of coolant from the hole, it means the seal has failed and the pump needs to be replaced. Some vehicles also use an electric water pump that is powered by an electric motor instead of the serpentine belt. 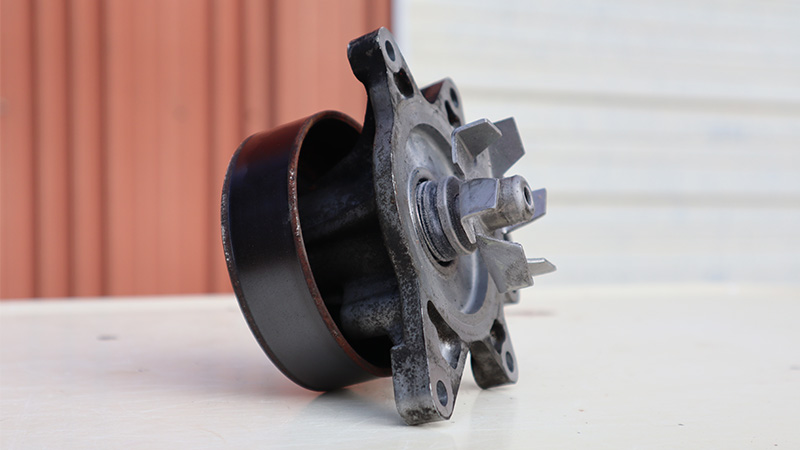 Signs your water pump may be failing

The only downside with water pumps is that they don't last forever and need to be replaced periodically. (We'll discuss when a little later.) The pump's numerous gaskets and seals can become brittle with age and can crack, or the pulley's bearings can go bad, both of which lead to failure.

When a water pump does fail, it's a major problem because it means coolant is no longer adequately circulating, temperatures are rising and overheating is soon to follow. Fortunately, water pumps oftentimes provide some advance warning that they're going to fail. Here are some clues to be on the lookout for:

From spring compressors to specialized pullers and more, we've got the tools you need to get the job done right. The Advance Auto Parts Loaner Tool Program is easy — if you don't have your own cooling system pressure tester, borrow one from your local store. 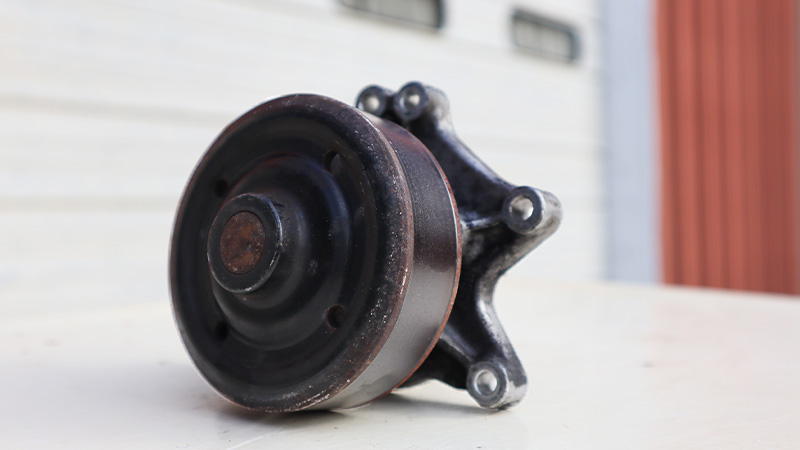 When to replace a water pump

As soon as a water pump shows signs of failure, it needs to be replaced. And, because of the pump's location under or behind the timing belt cover, most vehicle manufacturer specifications and auto technicians recommend replacing the water pump at the same time the timing belt is replaced (usually around the 100,000 mile mark) even if the pump isn't exhibiting any signs of failure. That's partially because of the time, effort and expense associated with replacing a timing belt. You don't want to do that job and not replace the water pump, only to have the water pump fail a few months later and have to go back in and repeat most of the same work.

For all its importance in protecting the engine from damage, a water pump isn't a super expensive part, usually costing around $100 to $150, which is all the more reason to replace it at the first sign of trouble.

Periodically check your vehicle's coolant level, but only when the engine is cool. A sudden or gradual loss of coolant could indicate a problem with the water pump.

Rich Ellis is a DIYer who’s worked in and written for the automotive industry for nearly two decades. He uses his experiences, lessons learned, and interest in maintaining and fixing vehicles on his family’s small farm in his writing.

How a Car Thermostat Works (and Signs that It Needs Replacement)

How Does a Car Radiator Work?

How a Vehicle Cooling System Works