A timing light is a great diagnosis tool, but only if you get what is going on. Whether you just want to check that the ignition system is all right or are aiming for maximum performance, grab your timing light and let's get started. 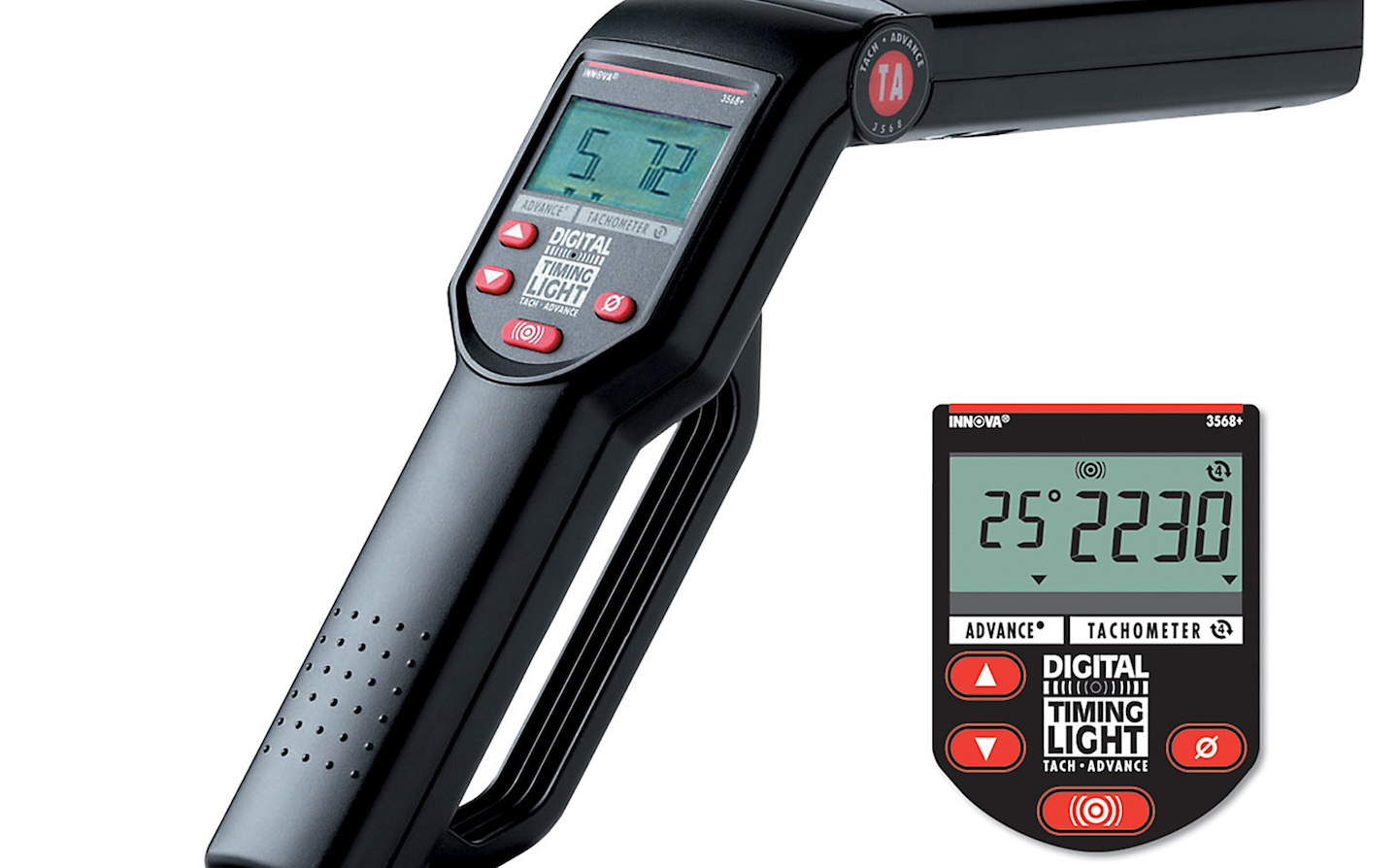 What is a timing light?

A timing light is a tool that can check engine ignition timing coming from the distributor. It's got a plastic housing, often shaped like a laser gun from a '70s sci-fi movie. The pistol grip is thought to provide a better handle for precise aiming in tight quarters, but it's probably more likely people expect it to look that way due to the common name “timing gun." Press the trigger, and light floods out of the large barrel opening.

The housing contains all the internal wiring, and three cables run out one end. The red and black are positive and negative for the battery terminals to supply power and ground. The inductive clamp connects onto the No. 1 spark plug wire, and sometimes onto the spark plug itself. Some older timing gun designs are not inductive and instead feature a spring that connects the plug wire to the plug; the clamp then connects to that spring.

How does a timing light work?

The inductive clamp is sensitive enough to “read" the pulse of the spark plug wire firing. Each time the distributor or coil pack fires through the wire to the spark plug, the timing gun senses the electrical charge and simultaneously fires a light pulse out the end of the gun.

This is useful to you because an engine has timing marks on the crankshaft pulley or harmonic balancer. These can be matched with hash marks on the timing belt/chain cover by using a timing gun. With the engine running and the timing light connected, press the trigger, and the light will pulse with a strobe effect to highlight what your timing is. You can see this measured in degrees.

For best performance, the spark plug fires just a split second before the piston is done compressing the air, creating a flame front in the cylinder. The distance from when the spark plug fires until the piston reaches the end of its stroke is the ignition timing, measured in degrees before or after TDC on the crankshaft pulley or harmonic balancer. For example, if the spark plug fires directly at TDC, the piston is at the top of the cylinder and the balancer mark reads 0, so the timing measures 0 degrees. If it fires just before top dead center, and the balancer mark shows 5, this measurement would be read as 5 degrees before TDC.

Need a visual? Check out this video with over 1.1 million views for an in-depth look at timing on a carbureted V8.

How a timing light helps you

Timing lights are a great diagnostic tool for classic carbureted rides, but they're also useful on modern engines as long as you have a distributor. If an engine won't start and you don't know why, connect the timing light and crank the engine, checking to see that the light senses the pulse in the spark plug wire. If it can't find the electronic signal, then you have just narrowed down the potential engine problems to just a spark issue.

But while it can check for spark, it earns the name timing light because of its primary feature of checking ignition timing. Whether you're aiming for maximum horsepower, gas mileage, a smoother idle, or just the factory settings, a timing light can help you get there. First, run a check to see what the current ignition timing is, then you can advance or retard the timing from there. For example, the old-school L98 V8 in a 1992 Firebird Formula is set for 6 degrees before top dead center from the factory, but it has more performance when you advance the timing to 8 degrees, or even 10 degrees if you use 93 octane fuel.

Engine Knocking – Pre-ignition (or detonation) is the technical term for that ping or knocking sound caused by the fuel and air mixture in the cylinder igniting at the wrong time. If you've never heard it, it's a lot like a metal hammer on the inside of your engine, usually when accelerating or under load. This could be caused by using a lower-octane fuel than the engine requires, or an excessive amount of deposits in the fuel system. Knocking is a serious condition, so try a higher-octane gas with a fuel system cleaner, and check the timing. Newer engines have an antiknock sensor that feeds information back to the engine control computer when pre-ignition is detected, and the computer then adjusts timing accordingly.

No Spark Advance – If your engine idles fine but struggles when accelerating, odds are it's not advancing the timing. In an old-school ride, you have a vacuum or mechanical advance that adjusts distributor timing as the engine revs. This allows the spark to ignite sooner, since the piston is traveling faster. The timing advances with the engine revs to keep the proper combustion. Modern-ish vehicles from the mid-'80s to the late '90s have computer-controlled distributors, but the symptoms are the same. Verify spark advance by having a friend rev the engine in neutral (or work the throttle linkage yourself) while you operate the timing light. You should be able to see the timing mark move when the RPMs go up.

"Check Engine" Light – This is likely your first indicator of something wrong on a modern vehicle. The PCM will detect a misfire in the cylinder and store an error code. It won't tell you why the issue exists, but the code will likely narrow down which cylinder is having issues. Then, break out the timing light, attach the induction clamp, and get started.

Got any timing light tips or tricks? Let us know in the comments below.

How to Replace Door Lock Actuators