Nissan's first entrance into Sports Car Club of America (SCCA) racing was a bust. The company, which at that time was known as Datsun, had a West Coast manager give two Datsun 2000 Roadsters to a family member to enter into West Coast SCCA competition. The best these cars were able to do was a 12th-place finish. Less than three years later, however, the Datsun 510 and then the Z-cars became the cream of the crop. The company's dominance in the sport started when the main company effort moved from a regional manager supporting his son-in-law to company headquarters giving its full support to an established race team with a mad owner. Here's a timeline of its success. 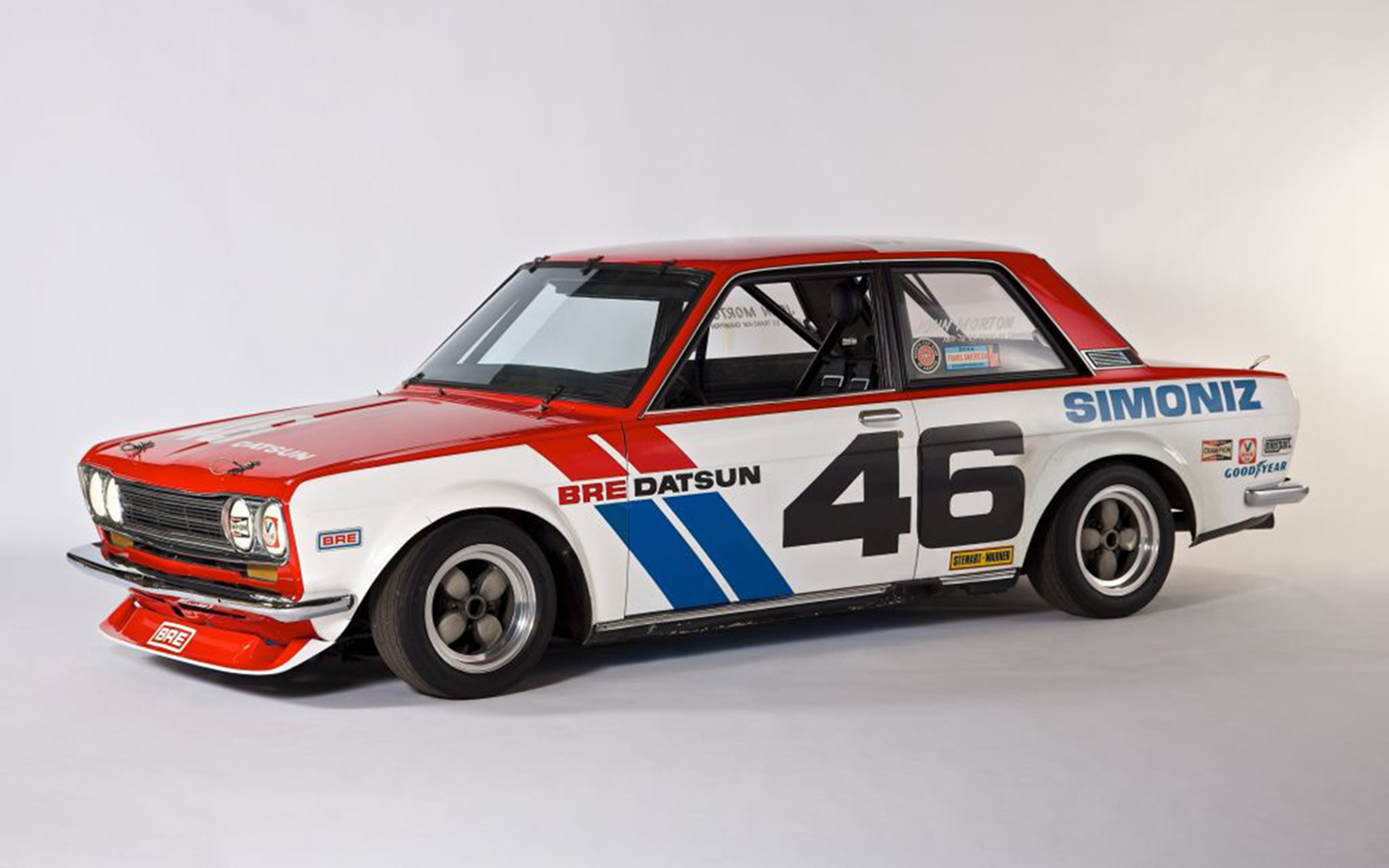 The '60s saw Japanese automakers attempting to make inroads in motorsports. Up to the latter part of the decade, American and European automakers dominated auto racing. The coming together in the mid-'60s of John Morton, Pete Brock, and Datsun/Nissan put Datsun/Nissan on the motorsports map. It only took a call from Brock to his mentor, who happened to be good friends with a top Nissan (of Japan) manager, to get the ball rolling.

Pete Brock ran a small race team (BRE-Brock Racing Enterprises) that originally ran Toyotas with John Morton as his drive. But Toyota suddenly threw its support behind the Shelby effort, annoying Brock and prompting him to call his mentor. A few weeks after this call, Nissan put its full support behind BRE, although it did give limited support to other teams running Datsuns. The team campaigned as BRE Datsun wearing red, white, and blue colors with a now-famous set of diagonal stripes on the doors.

Their success started right off the bat, with Morton driving Brock's 2000 Roadsters and then 240Z cars and winning almost every race they entered in 1970 and early 1971. Then Brock put Morton in the Datsun 510, a car Morton thought was ugly because it looked like a family sedan. That 510, Morton's now-famous Number 46, took him to the championship in the SCCA Trans Am 2.5 series in both 1971 and 1972. By 1969, the BRE Datsun team had succeeded in embarrassing the West Coast effort so the company's full effort went to the BRE Datsun team.

The championship runoffs of 1968 typified the company's total commitment to success. A fully-equipped workshop tent was erected in which the teams running the 17 Datsuns qualified for the race could work on their cars and get parts and tires that were supplied by factory reps. Crews even had an air-conditioned trailer in which to eat and rest up, making them the envy of every other team.

Unsponsored owner/driver has success with 1500 Roadsters

One of the drivers that helped achieve and maintain that domination was a good friend of mine. The National SCCA D Production champion for 1970 was Jim “Fitzy" Fitzgerald. Fitzy was an engineer for Western Electric who started racing in 1957, had a 30- year career in racing, and was a regular at the National SCCA Championship runoffs. He started running 1500 Roadsters and later moved to the 2000 Roadster. His first championship came in 1970, in D Production with the 2000. His second came in 1984, when he was driving Bob Sharp's 300ZX in the GT1 Class.

Up to the late '60s and early '70s Alfa Romeo and the BMW 2002 were the dominant cars in SCCA racing. Datsun's Roadsters and Z were competitive but not good enough to be dominant cars. The introduction of the 510 as the car Datsun would officially run in competition changed that. The car's power-to-weight ratio was far superior to anything else, tipping the scales at only 1,700 pounds. It also had completely independent suspension, a new technology at the time. All four wheels being able to move independently gave the 510 superior handling characteristics over the Alfas and Bimmers. 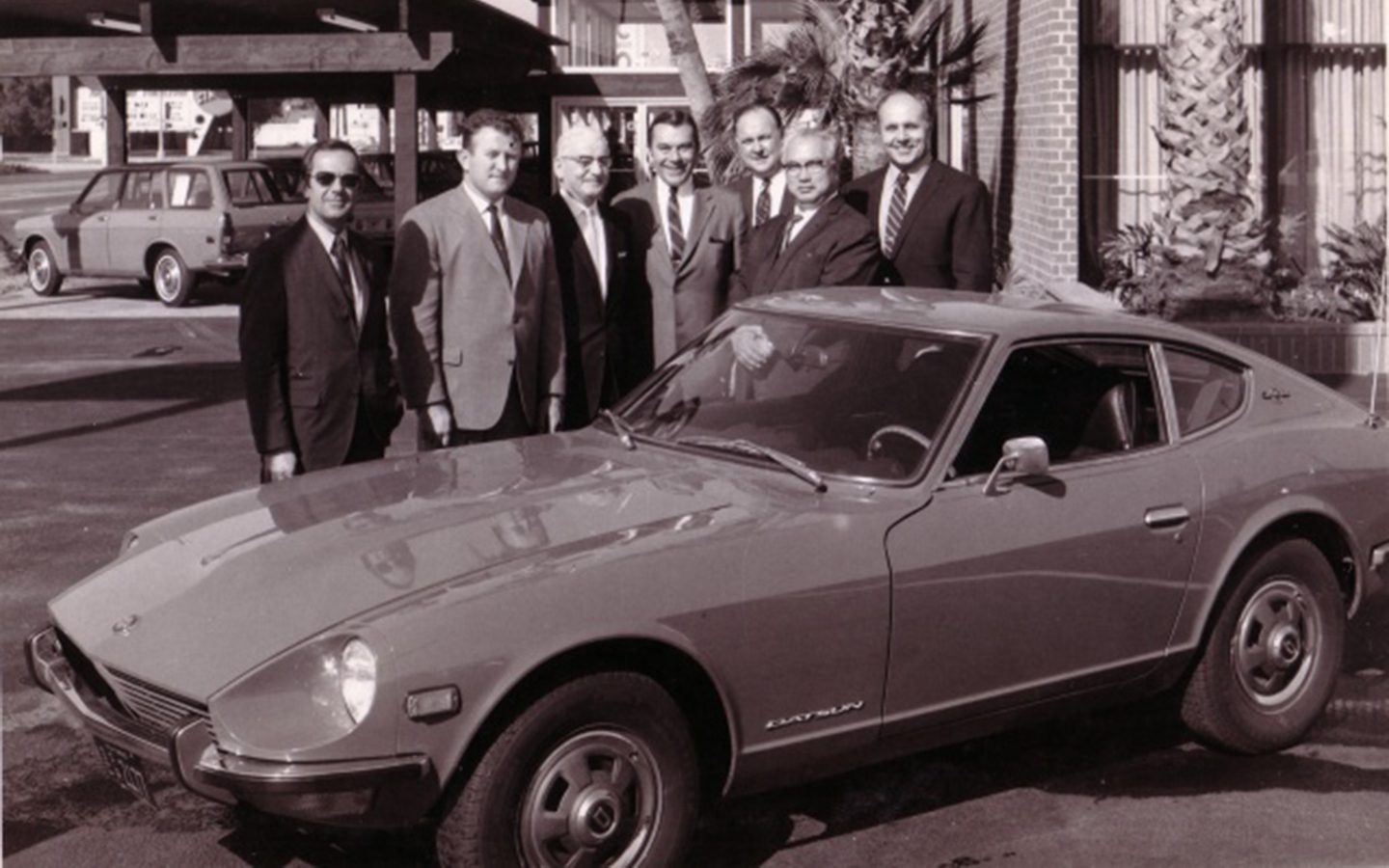 "We are having a love affair with the automobile. We do not want to build for you a chair to ride in on your freeways. American cars are built to be sofas. The Americans take their houses with them. We race to build a better car... and we race to win races." -Yutaka Katayama to the press prior to the Laguna Seca race. Mr. Katayama was known as Mr. K and the Father of the Z Car.

1972 sees the introduction of Bob Sharp with BRE

Although success began with John Morton, BRE, and Datsun, Nissan wasn't considered dominant until Bob Sharp joined the BRE team. Brock had created a “guest driver" position with the team because he realized Morton would be moving on at the end of the '72 season. Sharp won the season opener at Lime Rock in this car. Mike Downs and Lothar Strahlberg (respectively) came in second and third. All three were in a 510. There were a total of eight Datsun 510s in the field, and all but two—Morton among them—who DNF, finished in the top 15. Sharp went on to win the championship in '73 as well, marking the “official" beginning of more than a decade of Datsun/Nissan-dominated SCCA racing across the country. It also marked the end of the BRE-Datsun partnership and the beginning of the Bob Sharp-Nissan/Datsun partnership.

Datsun's racing effort started, with limited West Coast regional success with the 2000 Roadster. BRE also had some success with it. By 1969/1970, the company's main support was given to the 510 and then 240Z, though. Brock sold the Roadsters, and these and subsequent teams kept successfully running them in D and E Production through the late '80s. The success of the later models, like the 510 and the various Z Cars, in SCCA competition is due to the importance Mr. K. put on racing in the early years. 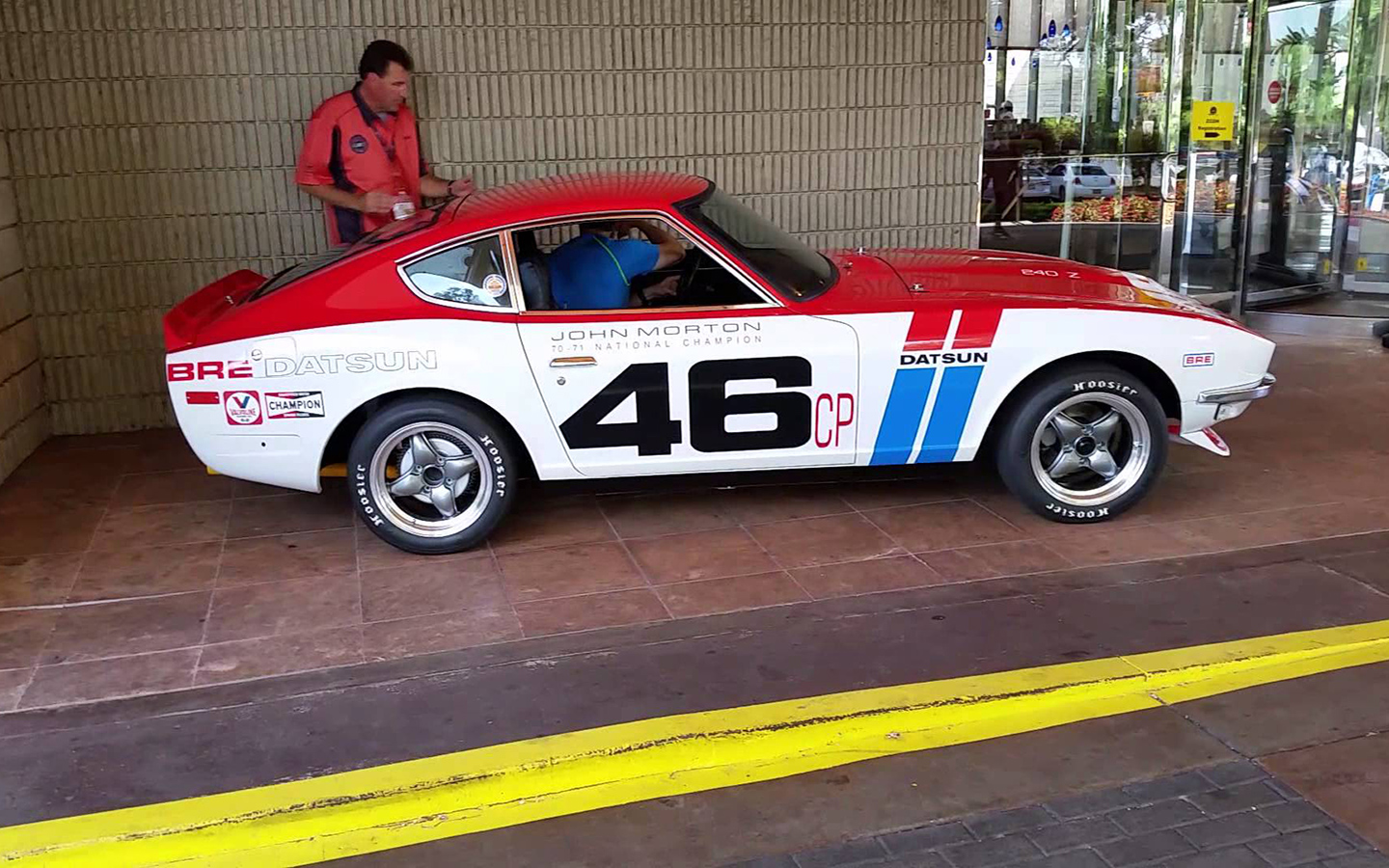 While Datsun's dominance solidified in the second half the '70s and into the '80s with the introduction of the “Z Car" line. This is where my family friend Frank Leary enters the picture. Frank was the service manager at a performance shop near my father's Chevron station in Mountain View, California, called FAR Performance. It specialized in prepping stock Datsuns/Nissans for racing and street performance, and Frank was in charge of that. In 1973, Kirk Allegro sold his 2000 Roadster to FAR Performance's Rob McFarlin, who threw the company's white over red side panels color scheme on the car and ran it in San Francisco region D Production races with enough success to be invited to the Road Atlanta Nationals in '73, finishing fourth.

Unbeknownst to Kirk, my friend Frank Leary was building his own race car—this one a 240Z, with the help of Fremont Datsun and my father. Frank, considered one of the best Z performance mechanics on the West Coast at the time, had considerable regional success in this car. His national success started in 1978, when Frank was invited to the National Run-Off at Road Atlanta, a race in which he competed against BRE Datsun driver and big-time actor Paul Newman. He won the race, and the SCCA C Production National Championship, in his 240Z. An amazing 19 of the 23 cars on the C Production grid that day were Zs, as well as 15 of the 23 Showroom Stock A class cars.

Nissan USA engineers took a stock B210 (admittedly with a few extra goodies attached) out to the Bonneville Salt Flats Time Trials in 1974 after working on the car in their off hours for the previous 10 weeks. Their effort paid off with a speed of 121.871 mph, a record for their class. The B210 started competing in C Sedan in 1975 and swept the top five spots. Theu did almost as well in B Sedan with a 710 coming in first, a 610 placing second. Datsuns also swept the fourth through eighth spots.

Datsun/Nissan won hundreds of races and titles in the '70s

Datsun/Nissan is one of the most successful companies in motorsports. During the 1976 SCCA season, it won 455 races and rallies, accumulating three manufacturer's titles and seven national championships; Z car drivers won an amazing 79 percent of C Production national races, and B210s won 60 percent of their C Sedan races. Additionally, 510s, 610s, and 710s claimed wins in 80 percent of the B Sedan races they entered. Finally, D and G Production were dominated by long out-of-production 1600 and 2000 Roadsters.

Highlights of the '77 season included Logan Blackburn taking C Production in his 280Z and the new showroom stock class went to Dale Fazekas in his 280Z. Additionally, nine wins were garnered by Don Devendorf of Datsun's West Coast team Electromotive in the RS Class in a B210. 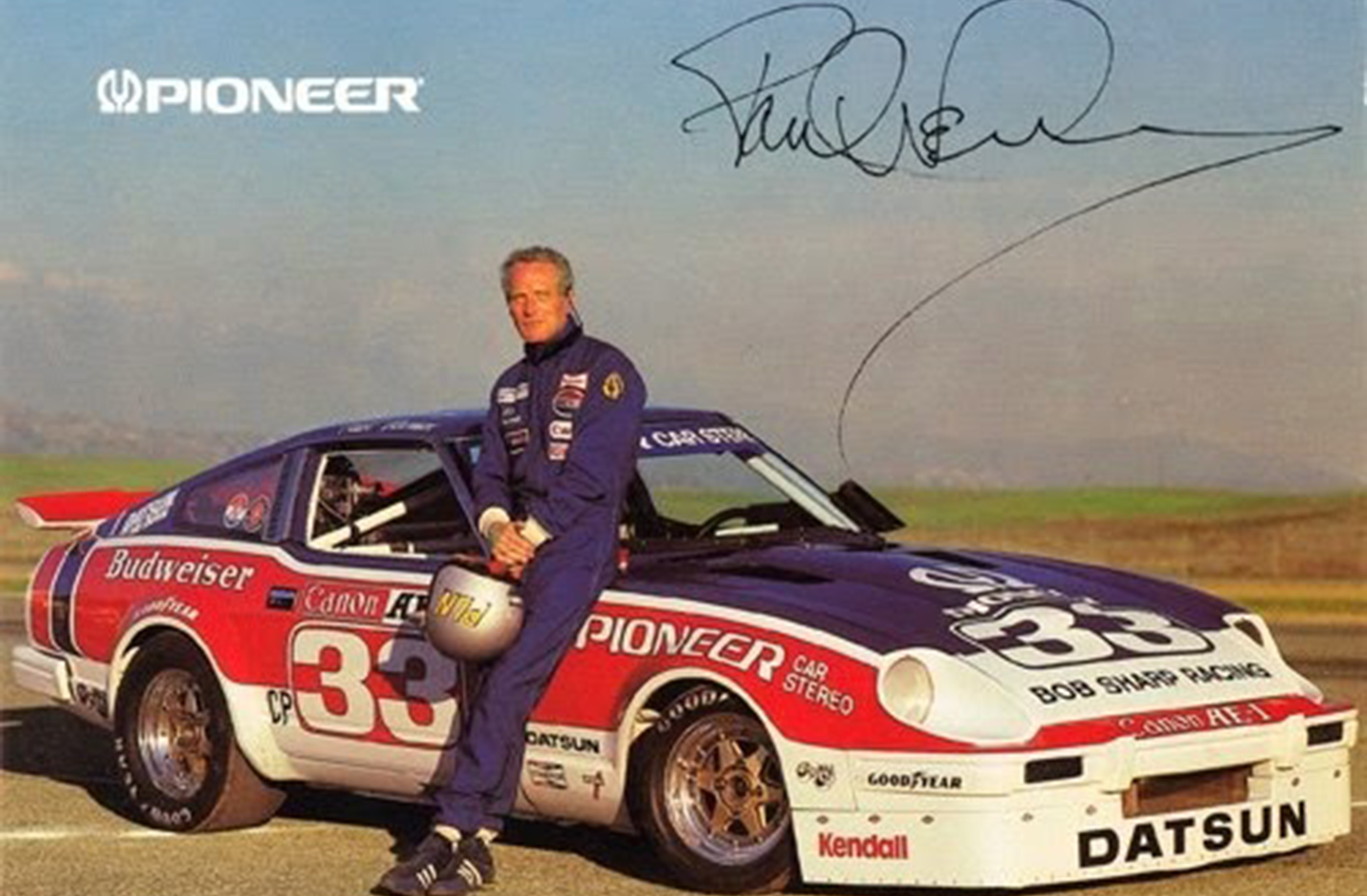 As mentioned earlier, Frank Leary won the C Production title in 1978 in his Z. Paul Newman, driving for Bob Sharp Racing, introduced the 280ZX to the world by driving it to the 1979 C Production Championship.

Since changing its name in the U.S. to Nissan, the company has continued its success in motorsports, and especially in SCCA competition. One particular success story involves “Turbo Tom" Tom Wyatt, III and his turbocharged Datsun 510. Tom entered the car at “Classic Motorsports Mitty" at Road Atlanta and was originally placed in class with other 510s. His turbocharged car was so powerful that by the end of the day he blew the doors off Corvettes, Cobras, and even Porsche 930s in class.

The Life and Times of Carroll Shelby