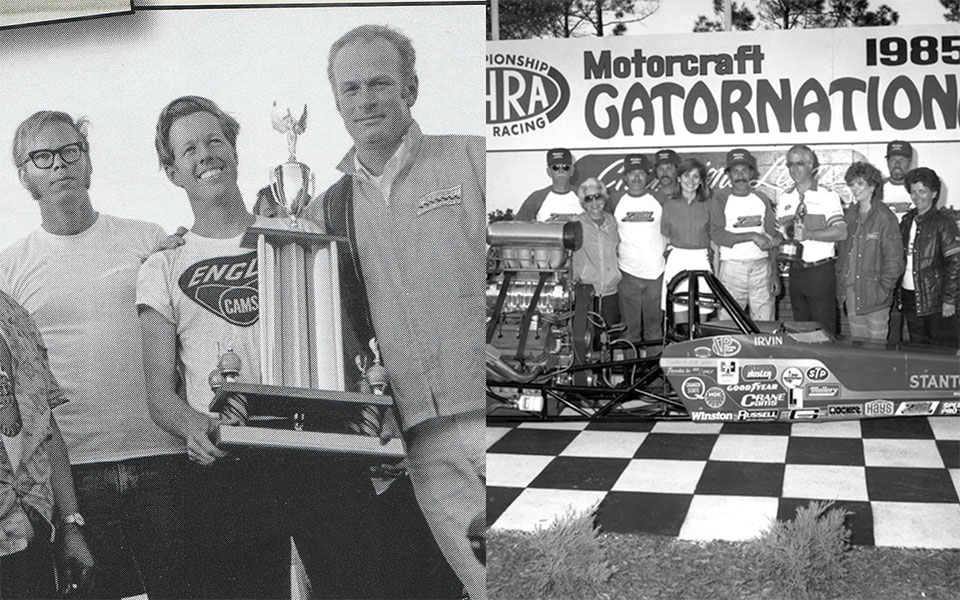 Prudhomme. Bernstein. Garlits. Glidden. Muldowney. Gwynn. Snow. Long-time fans will also know these names and the impact they had on the sport of drag racing in the United States. 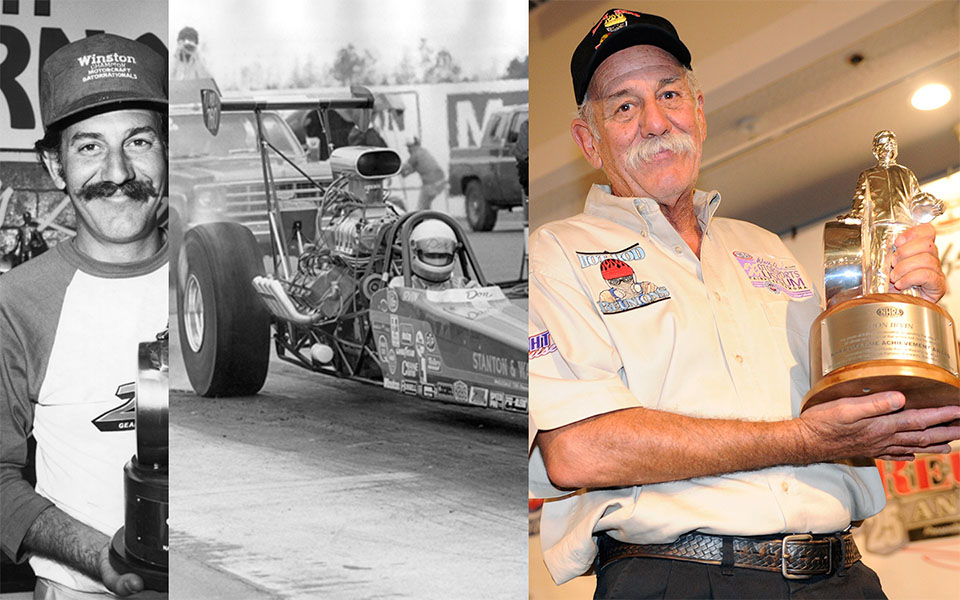 These recognizable names were the second generation of impactful drag racers. Advance Auto Parts got to sit down with two of the first generation of NHRA racers and talk with them about their racing careers. Sit back, relax, and read all about the exciting careers of Don Irvin and Jimmy Scott. 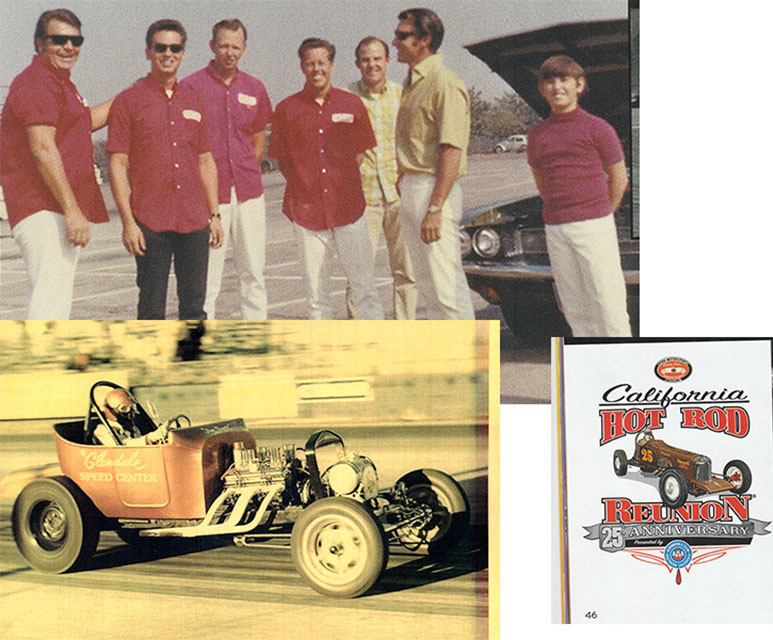 Jimmy Scott: Too Small for Sports 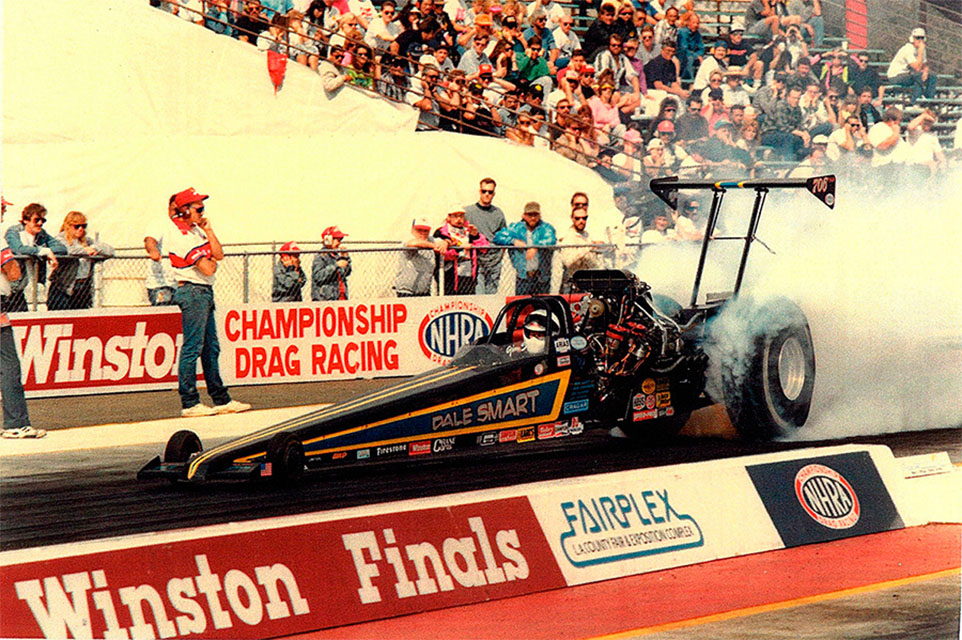 Scott's love for cars found its first outlet in street racing, because, as he put it, "I was a little small guy, I couldn't do sports very well. However, I could do cars fairly well."

Street racing caused him to rack up a few tickets. Then one day he got lucky and went before a judge that was the track manager for the old San Fernando Drag Strip . He gave Scott the standard spiel about not racing on the street but that instead he should do it in the controlled environment of a race track—"the standard speech," as Scott put it. He then told Scott about the drag strip and told him, "Come on out some day and check it out." Scott was at the track the next Sunday and he saw the judge again. On the spot the judge gave him a job paying $15 a day passing out time slips.

Scott was hooked. He worked there at various positions (starter, announcer, time slips, etc.) for the next eight years, until the track closed. 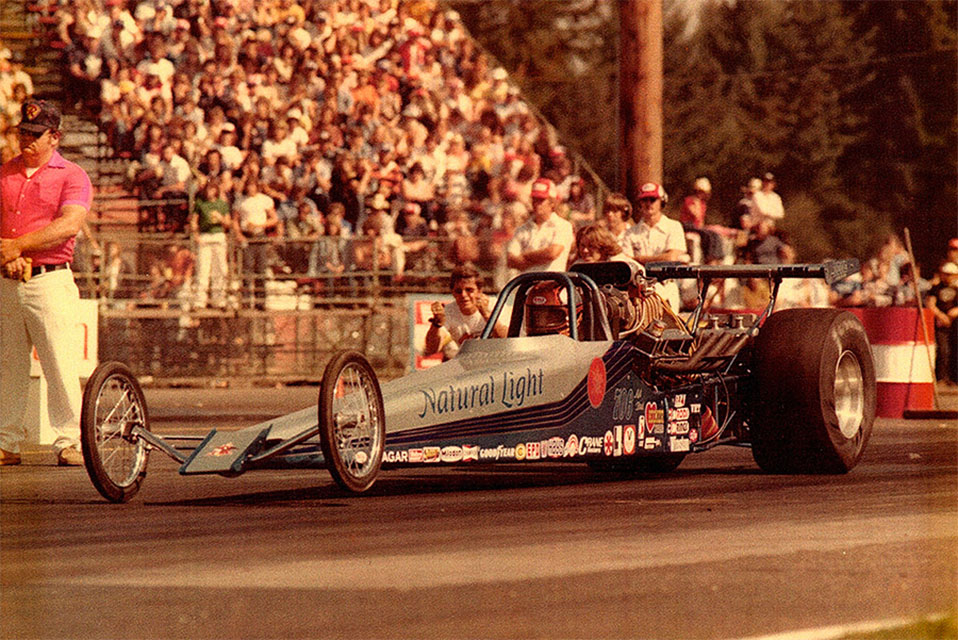 During this time, he was able to make some contacts with drag racers. When the track closed, he started asking around and was able to get some help to start buying parts, "and then I just got into it!" This was back in the day when a bottomless wallet wasn't required to become successful at the sport.

"Sure, the cam guys came around and asked us to try out their cams, but there was no need for the big dollar sponsorships we see today. Two guys with a mediocre income could do it and run a competitive Top Fuel car. I feel really, really blessed that I got into it when I did at a time when Joe Average Guy and his buddy could build a car and go out and be competitive."

Pictures are worth a thousand words, and the pictures prove that Scott was more than just "competitive" back then. 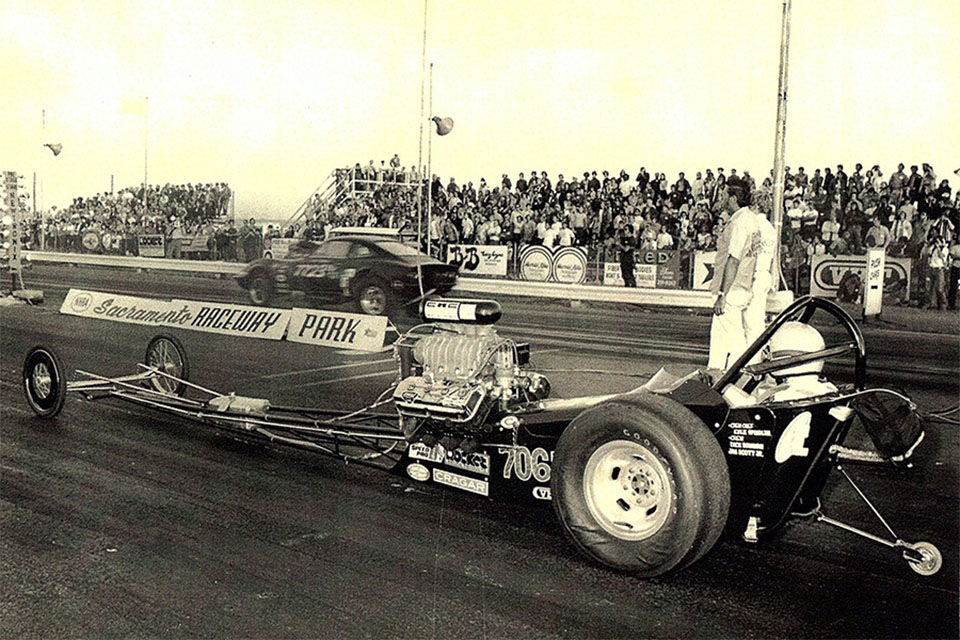 Scott says that with the exception of a little over a year here and there, he has really never stopped driving. He got out of the sport almost completely a few times, but kept being drawn back, like a moth to a flame. He started out bracket racing and moved through the classes (some of which no longer exist) until he got to the "Big Boys" of Top Gas/Fuel and Funny Car.

The year 1968 was a pivotal one for him. The famous car builder and crew chief Al Weiss contacted Scott, asking if he would like to drive his Top Gas dragster. Scott jumped at the chance and it led to the most successful seven years of his racing career.

1974 was the best year for that partnership with the two of them, "winning just about everything that year. We ended up with more points than anyone in any other class. He was just so smart and we worked well together. That was my dream year!" Scott remembers with a laugh. 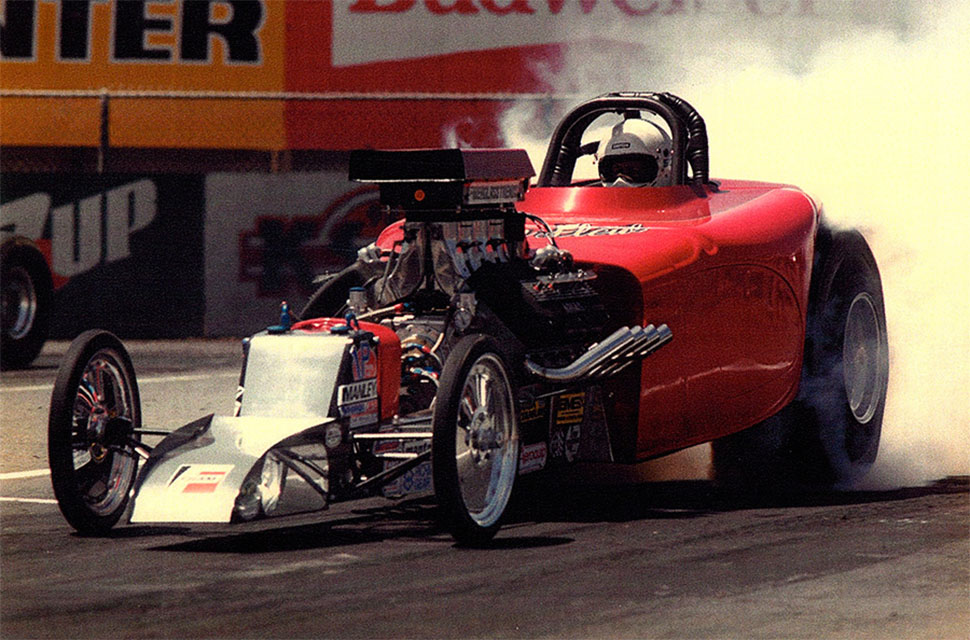 Incredibly, Scott is still involved with NHRA drag racing to this day ...as a driver. Not long ago, he sold one of his cars to a friend in Texas. Shortly after, that friend hired him to "drive just a couple races until we find a full time driver." According to Scott, that was 15 years ago and he was getting ready to go out there to drive in a Nostalgia race.

Scott's titles include "a couple of Wallys and some other smaller titles and championships." 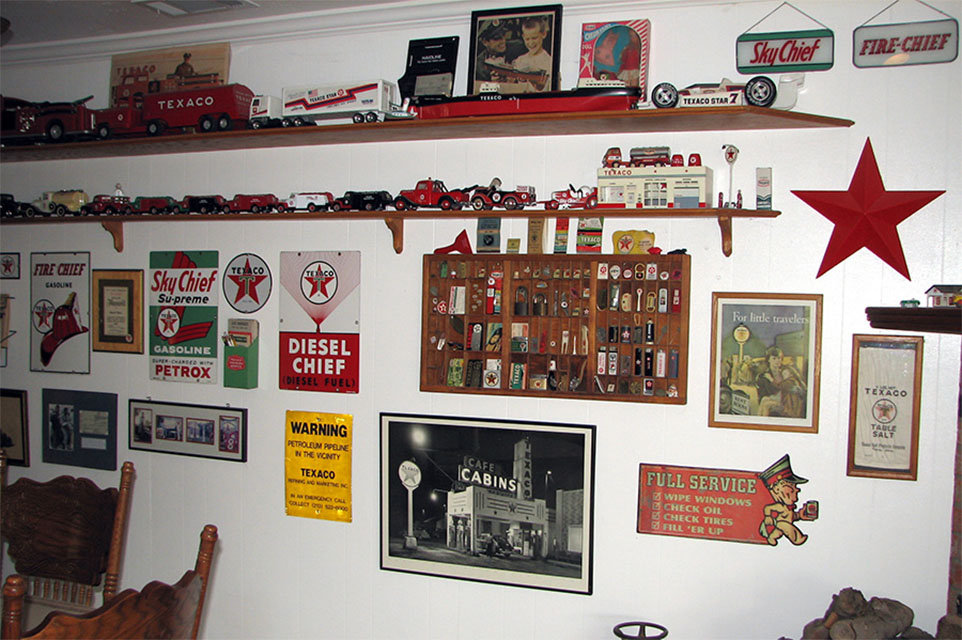 In the early 60s, Don Irvin worked for Standard Oil of California as well as running his own machine shop in South San Diego County. He was also a street racer because of his competitive nature. "I loved the adrenaline rush of light-to-light racing," Irvin explains. However, he soon realized that not only would street racing not lead anywhere, saying "it could also be hazardous to my freedom and health."

It was then that Irvin got started in the amateur classes in the fledgling NHRA in Southern California. It wasn't long before he was bitten by the racing bug. In his own words, "I loved the adrenaline buildup of waiting and watching the Christmas tree (the starting lights) cycle through the colors to green." He also loved the kick in the seat he got when the car launched from the light. 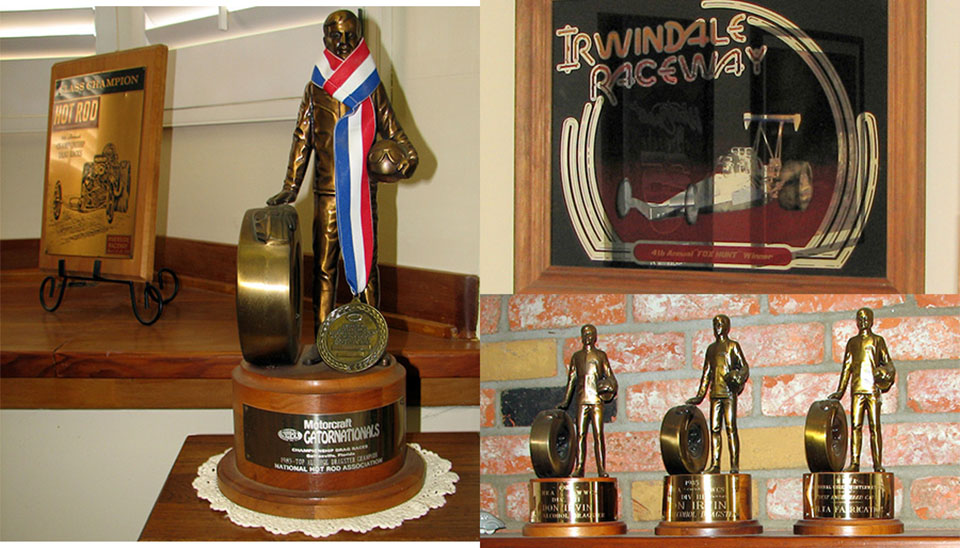 In the early 70s, Irvin graduated from the amateur classes to Pro Comp. He won both the Gas and Fuel titles at the March Meet at Bakersfield in 1974. He also finished in the money at several sanctioned events around SoCal that year. He continued to improve with the payoff being his win at the NHRA Motorcraft Gatornationals in 1986, earning his first Wally.

Irvin hung up his firesuit at the end of that year after 24 years as a successful racer and became the NHRA's Safety Supervisor, creating the Safety Safari. 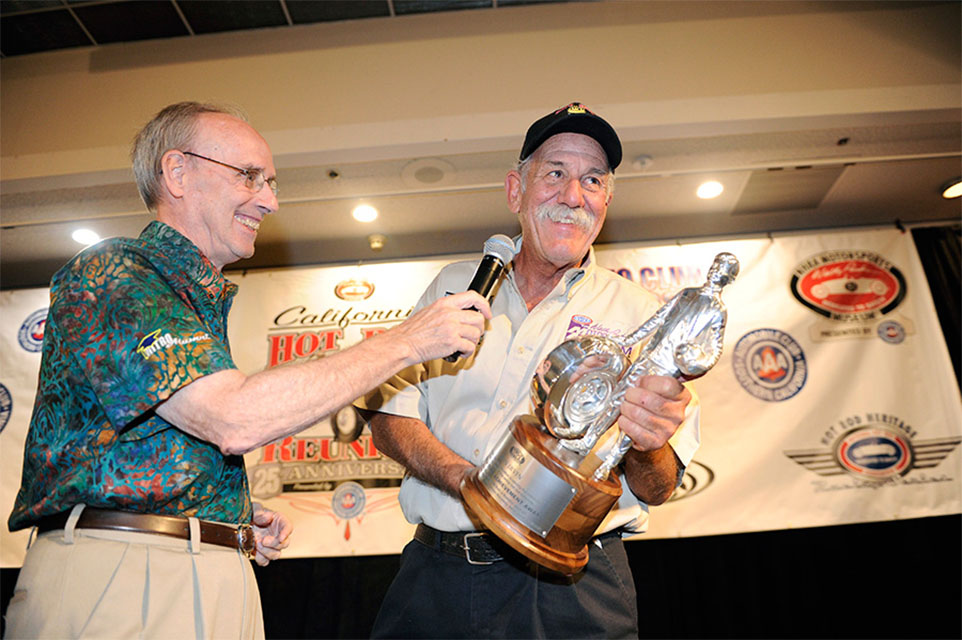 Mr. Wally Parks, the genius behind the NHRA, asked Irvin to come back and supervise the organization of the NHRA's safety teams. Because he loves the sport so much, he agreed. Irvin now travels across the country, supervising safety operations at major NHRA events coast to coast. Irvin was recently awarded the prestigious NHRA/CHRR (California Hot Rod Reunion) Lifetime Achievement Award for his 40+ years of service to the sport.

Scott and Irvin Meet Each Other and Race 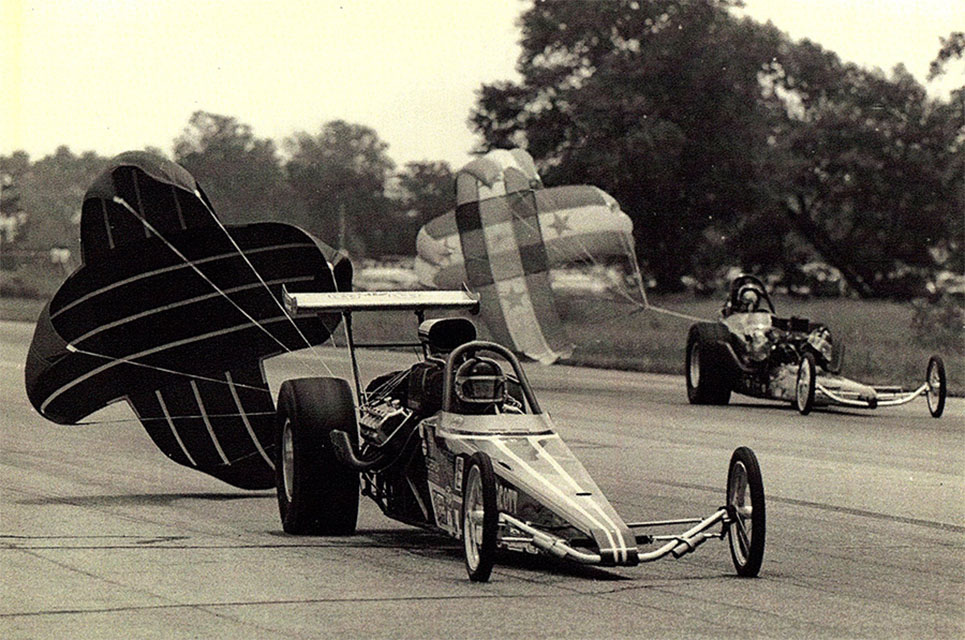 Scott and Irvin met near the beginning of Scott's tenure with Al Weiss's Top Gas dragster. Irvin was driving the Bridges Brothers Junior Fuel car. They were in two different classes but every now and then they'd get to race each other in what was called the "Combo-Eliminator" class. The class consisted of Top Gas, Junior Fuel, and Fuel/Altered (F/A).

"We were both pretty equal, we were both competitive. However, the most disappointing loss I suffered to Donnie was at the March Meet and I was about a car length in front of him and broke the rear-end." That was the year Donnie won the March Meet.

Irvin laughs and says, "I remember that!"

Shortly after that Weiss decided he wanted a two-car team and hired Irvin to drive the second car. The rest is, as they say, is history.

NHRA fans have much to thank these men and the men they raced against for making the sport of NHRA Drag Racing what it is today.

Have you followed NHRA since its early days? Share your memories in the comments below.