A 1965 Mustang is a classy ride, with most owners building pristine show cars, or pleasant Sunday drivers with few modifications. Ken Block has other ideas. His flame-spitting '65 notchback Mustang looks like it wants to shotgun a can of Monster Energy and go raid Area 51.

Dubbed “Hoonicorn," the world's first all-wheel-drive performance Mustang rips around corners with all four tires spewing smoke. This thing is nuts. When it finally stops, let's take a closer look. 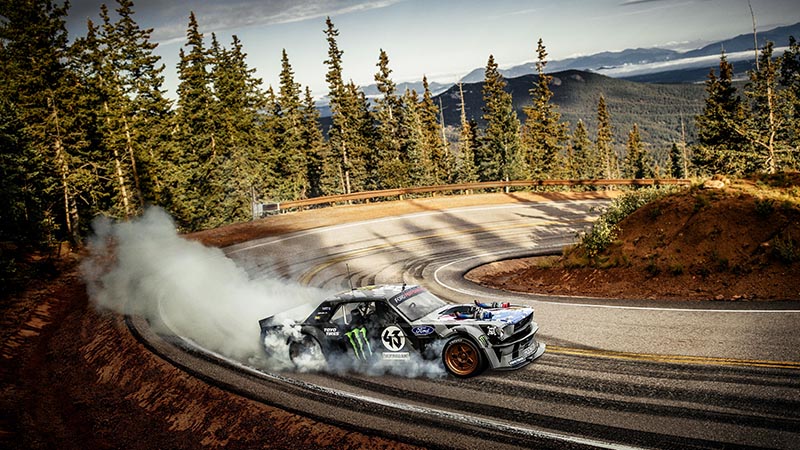 The Unicorn of Mustangs

You're probably asking, “What's with the name?" Pro rally racer/drifter/stuntman/showoff Ken Block made a name for himself and his Hoonigan Racing Division in World Rally Championship, but it's his side projects that made him famous. Block's team set up shop in 2010 and took their name from the more familiar “hooligan" and “hoon," a slang term from Australia meaning driving in an aggressive manner for show, including burnouts, donuts, and drifting.

Around the same time, “unicorn" became slang for anything rare or the only one of its kind, like the mythical creature. To keep the project quiet as it was being built, the Hoonigan team used the codename “unicorn." Combine the two terms when you're busy texting, and you have the only one of its kind, meant for high speed shenanigans: the Hoonicorn. 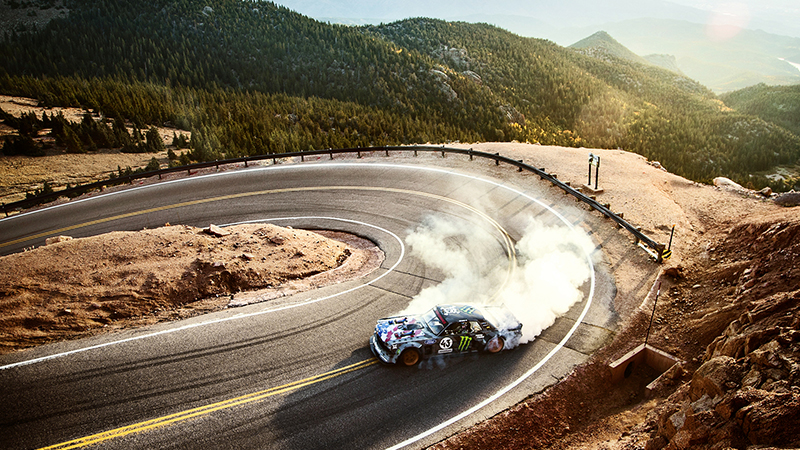 The Hoonicorn configuration in Gymkhana SEVEN is a 1965 notchback featuring a NASCAR-style Roush Yates 410 CID V8 based on the Ford Windsor series, fed by independent throttle bodies. Roush's website shows that it's a little over $20,000 of engine. This first version, easily identifiable by the massive hood scoop, made 845 horsepower and 720 lb-ft of torque, thanks in part to the 14:1 compression ratio.

All of that engine was stuffed into a rally car inspired tube frame chassis built by pro drift car builder ASD Motorsports. With massive fender flares wrapped in custom carbon fiber body panels, it does a fair imitation of a classic Mustang, just slammed and covered in graphics. That awesome stance comes from one-off CNC billet suspension parts, fully adjustable to the needs of the next event, including inboard cantilever shocks similar to Formula 1 cars.

You can buy fifteen52 wheels, but Hoonicorn's bronze 18-inch, three-piece wheels are no longer in production. The final piece comes from the un-muffled exhaust exiting the bodywork, blasting flames when off throttle.

Inside, the carbon fiber dashboard offers a few Auto Meter gauges and toggle switches. Unlike street drivers that often install short throw shifters, Hoonicorn features exceptionally tall handles for the shifter and drift brake that cuts power to the rear wheels as brakes are applied. Shifts go through a 6-speed manual Sadev transmission built for the Dakar Rally, and they also built the front and rear differentials.

Barely anything remains of the original '65, with mainly just the roof, and the A-and C-pillars staying behind. The original floor is dropped a couple inches to accommodate Block's 6'0" height, his helmet, and a roll cage. 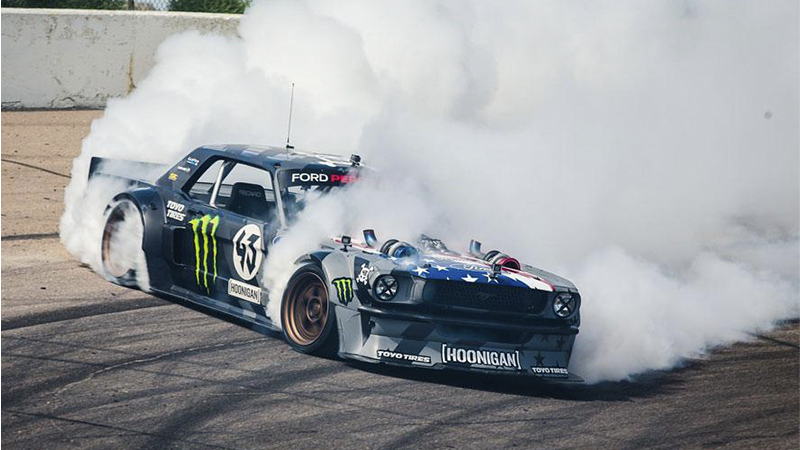 Make it Better with More Power

Most of us can't leave our vehicles alone, and neither can Mr. Block. For the next video series, Climbkhana: Pikes Peak, Hoonicorn would need some upgrades. The mountain's 14,000+ altitude above sea level makes even powerful naturally aspirated V8s run out of steam. Race company Switzer Dynamics added turbochargers and built a new intake manifold that replaced the distinctive hood scoop. The new turbos and plumbing don't fit under the hood, so the designers went for a wilder look, with the hardware poking through cutouts in the hood. Turbochargers create more heat with that extra power, which the team tried to reduce by using cooler burning 110 octane methanol fuel.

“It was designed to go up Pikes Peak, to drift all the way up it," said Dan Carver, shop manager at Switzer Dynamics. “With the horsepower Ken was wanting to make and the atmosphere that it was in — when going up Pikes Peak you're going for such a long time at wide open throttle — it just made more sense to keep it on methanol to keep the engine temperatures cooler." (You're don't want to run methanol in your F-150 because it's less energy dense than gasoline, and hugely toxic.) 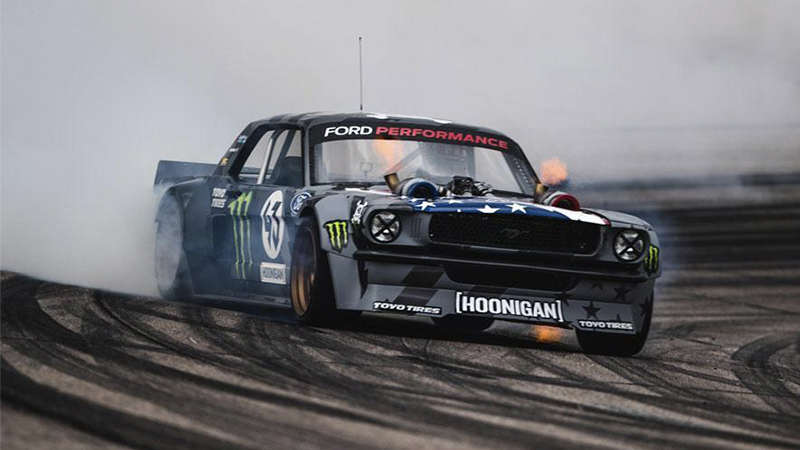 “We got the job between MoTec and Rousch-Yates," said Carver. “The whole build was done at our shop where we did the conversion from NA to mounting the twin turbos on it." Carver said Rousch Yates built the long block, but Switzer Dynamics built the intake and exhaust systems. “We drew it (digitally) and designed it in-house, and machined it out of 6061 aluminum on our CNC machines."

Additional changes include the stars and stripes line the hood, but otherwise the paint and visual setup is similar to V1; dark and covered in subdued sponsorship logos. Hoonicorn is quite the brand promotional tool, but it just might also be the most effective and entertaining way to shred tires.

“It's awesome," said Carver, summing up the Hoonicorn build. “It made really good numbers the first time out (on the dyno). It was impressive. It's a wild car man. There's not another car out there that's capable of what that thing is. It's very unique."

Watched any of Block's Gymkhana videos? Is Hoonicorn the ultimate Mustang? Let us know your thoughts in the comments below.

Waving the Rainbow Flag at the Finish Line