Year over year, fewer people are relying on cars to get to work. In 2007, about 85 percent of Americans drove to work; by 2018, that number had dwindled to 77 percent. That means more and more people are using public transit, bikes or their own two feet to get where they need to go, especially in dense urban areas.

Of course, a lot of cities are not designed to be bike- or pedestrian-friendly; not surprisingly, there has been a spike in pedestrian-involved accidents in recent years. Add to that the growing number of electric cars that are almost completely silent, giving pedestrians no warning. What steps are being taken to keep pedestrians safe?

Year over year, fewer people are relying on cars to get to work. In 2007, about 85 percent of Americans drove to work; by 2018, that number had dwindled to 77 percent. That means more and more people are using public transit, bikes or their own two feet to get where they need to go, especially in dense urban areas.

Of course, a lot of cities are not designed to be bike- or pedestrian-friendly; not surprisingly, there has been a spike in pedestrian-involved accidents in recent years. Add to that the growing number of electric cars that are almost completely silent, giving pedestrians no warning. What steps are being taken to keep pedestrians safe? 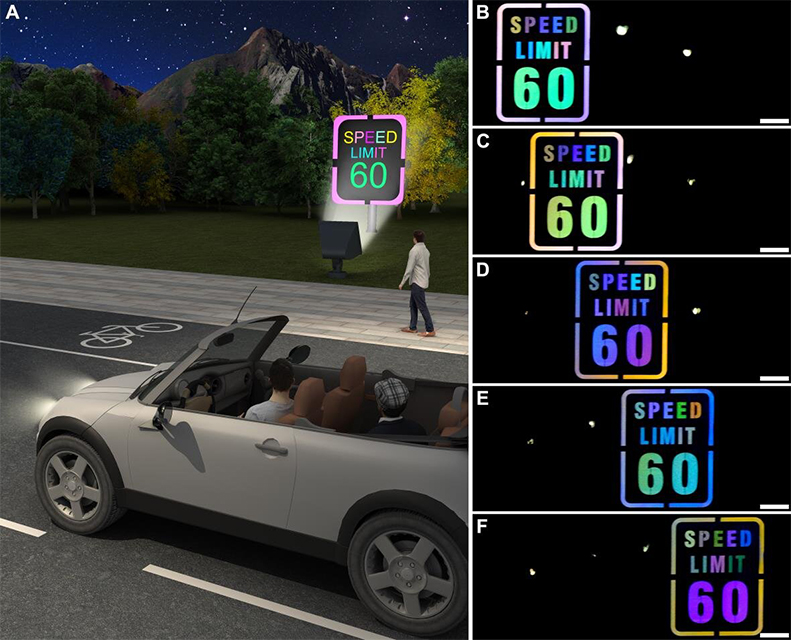 Retroreflective signs will change color depending on your perspective.

Ever seen a car with color-shifting paint that seems to change through a variety of hues as it drives by, depending on your perspective? These paints, known as "chameleon paint," includes tiny fragments of glass that act like prisms, refracting and breaking up light at different wavelengths depending on light intensity and viewing angle.

A similar technology is being used for road signs. Retroreflective signs will include a thin film over the sign's surface, impregnated with tiny polymer microspheres. Thanks to the properties of these microspheres, white light will be reflected when the viewer is looking straight-on at the sign. As the viewer moves on and sees the sign at an angle, changing colors will be reflected, all depending on angle of observation and the movement of the light source.

It's thought that this phenomenon will attract the attention of distracted drivers and pedestrians both. In one experiment, a speed limit sign was set up with a white light shining directly on it and the sign's letters and numbers using the new material. As drivers passed by the sign, the letters and numbers appeared to flicker and change color. In another experiment, markers at the edge of a lane used the reflective film, and would appear to flicker as a car drove by. The phenomenon would happen more quickly depending on the speed of a passing car, helping to alert pedestrians and drivers both.

Over half of fatal collisions occur on rural roads. Researchers at University of Texas/San Antonio have studied these patterns and have developed an interactive stop sign that helps flag a driver's attention as they approach. These systems use a thermal sensor to detect an oncoming vehicle, and can even narrow down the vehicle's type, weight, size and classification.

Learn more about this technology from the researchers themselves.

As the vehicle comes to the stop sign, a red flasher atop the sign will start to blink. Thanks to solar power and the low current draw of the sensor system, there's no need to rely on a hard-wired power source and these cost-effective signs can be installed far from a power grid. 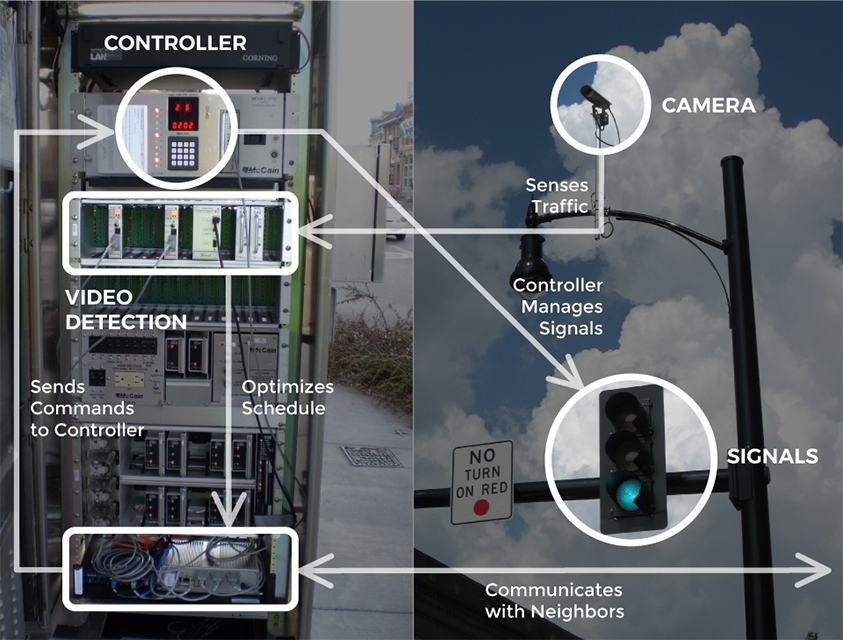 The city of Portland, Maine is growing in population, but has a very old street system - and 14 percent of its population walks to work. The town had been experiencing a surge in pedestrian accidents, so planners teamed up with a company called Rapid Flow to manage traffic signals and intersections.

The company's technology, called Surtrac, manages stoplights with artificial intelligence, tracking traffic density and speed in real-time to optimize traffic flow. In a pilot program, Surtrac was deployed at the city's busiest intersection. The result was a 20 percent drop in delays and congestion, which of course also means a payoff for pedestrian safety. If rolled out in large scale, a program like that could mean quicker travel time, fewer stops (meaning less wear and tear on vehicles and tires), lowered emissions and fewer delays.

RapidFlow is developing technology that could communicate with pedestrians' smartphones. For instance, a blind or mobility-impaired pedestrian could use a voice-activated command to request more time to get through an intersection, and the system could time traffic signals accordingly. The company is even thinking down the road to when a next-generation system could be used with autonomous vehicles. The vehicles would be connected to the network, with cameras and sensors alerting the driverless cars to approaching pedestrians, other cars in dense traffic and the infrastructure around the vehicle.

Lots of cities, especially those with college campuses, have crosswalks where you can press a button and pavement-embedded lights flash to alert drivers. You then have a given amount of time to get across the street, and hopefully that's long enough.

Now imagine a system where you don't need that button. A Korean firm is developing a technology where a thermal imaging camera detects a person who's about to enter the crosswalk, triggering flashing lights that can be seen for 50 meters. As a backup warning, a light flashes when the driver is 30 meters from the crosswalk, and a warning image is projected on the ground in front of the pedestrian to alert him to an oncoming car.

This is aimed at elderly people, who may look at the ground in front of them more as they walk, or those who trudge along, eyes down, looking at a smartphone. The system also sounds an alarm and triggers a vibration and chirp on the pedestrian's phone.

In tests involving 1,000 vehicles, almost 85 percent of drivers stopped or slowed in response to the flashing light, and most slowed 20 percent or more when approaching the crosswalk, even without the warning.

These advances in road sign technology will help keep roads safer for drivers and pedestrians alike.

What's the most high-tech road sign you've ever seen? Let us know in the comments.