You might be familiar with 3D printing, also known as "additive manufacturing". It's a technology that's been around since the '90s and uses computer aided design (CAD) and a plastic filament to add material layer by layer and produce a three-dimensional object.

This process, also known as fused filament fabrication or fused deposition modeling, is excellent for producing a prototype that has details and contours that would be hard to duplicate otherwise. Even better, it makes it much simpler for engineers and designers to incorporate small changes and revisions into a later-generation prototype. That sort of flexibility cuts time and expense in the entire manufacturing cycle.

The early applications of 3D printing were mostly used for producing prototypes for manufacturing, taking a great deal of time out of what would otherwise be a complex process. These prototypes could range from a fastener or a clip to a door handle, an intake manifold or an entire dashboard. Being able to quickly revise and produce another prototype is a pretty big deal, because shutting down a manufacturing line even for an hour costs a lot of money. Early 3D models, however, tended to be more delicate due to their materials and couldn't stand up to repeated use.

The aerospace industry has been using metallic 3D printing for years, for its advantages in cost and efficiency and its ease in working with materials like alloys or titanium. Since the production numbers for automotive parts and systems are greater, the auto industry has lagged behind in the field. 3D printing is still used more for tool-and-die and setups rather than actually producing parts.

That's starting to change, though. 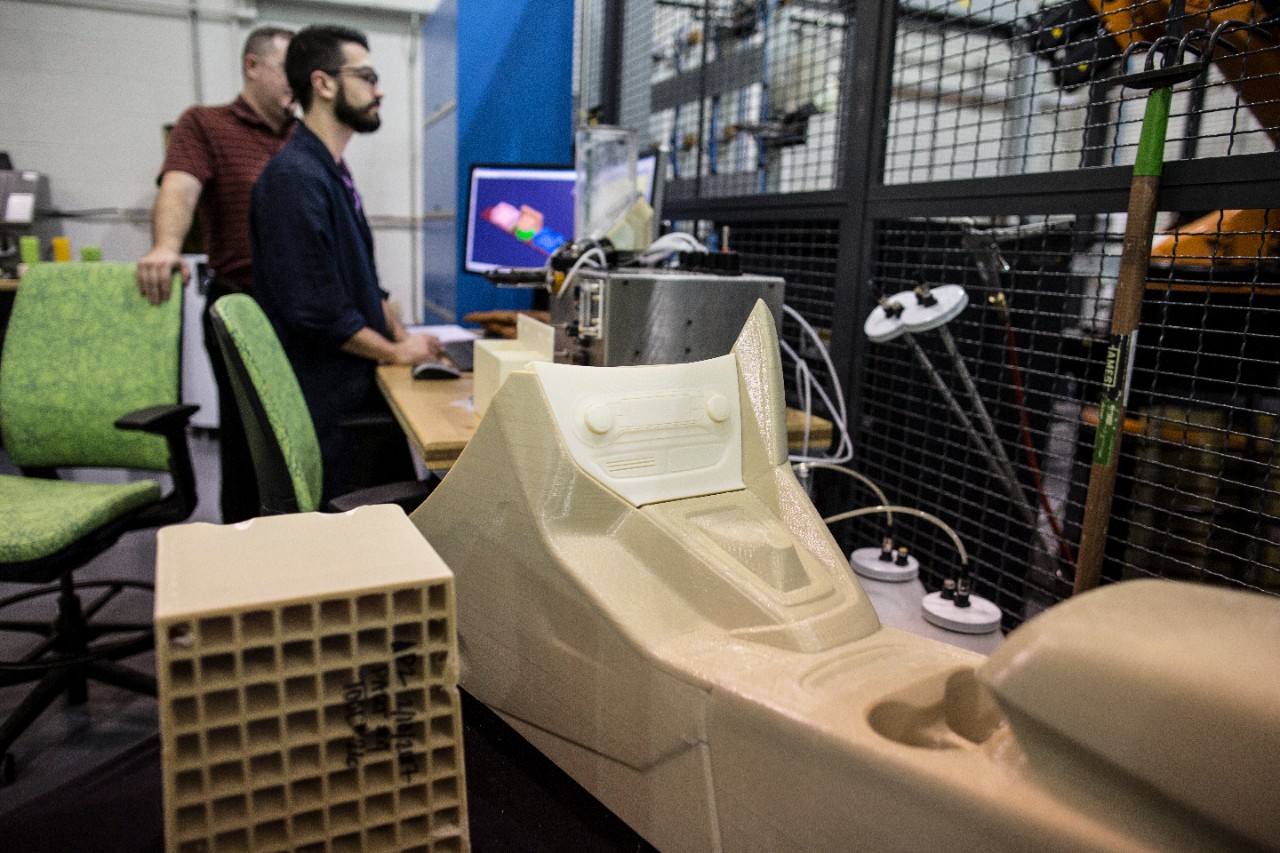 Now the technology has evolved, and more cost-effective and accurate printers are becoming available, the automotive industry is embracing 3D printing. Here's just a few examples of how it can be a game changer:

3D printing can also be done with metals, using metallic powder and a sintering process. Sintering is what happens when a material is heated up, compacted and formed without necessarily heating it to the melting point — think about ice cubes fusing to each other in a drink, due to the temperature difference between the cubes and the water. Metallic 3D printing has made it possible to produce parts like engine mounts or connectors without using traditional manufacturing methods.

Ford was pretty far ahead of the game on 3D printing. Way back in 1986, when the technology was still called "stereolithography," the company bought the third-ever industrial 3D printer made.

At Ford's Advanced Manufacturing Center in Redford, Mich., collaborative manufacturing robots and 3D printers communicate with each other and their human operators every day. At Redford, Ford also uses virtual reality and augmented reality to solve problems like plant floor layout and production flow.

The bean counters at Ford have discovered that 3D printing actually allows them to produce some parts for the Mustang Shelby GT500 at lower cost. Ford has put a $4.5 billion investment into 3D printing as part of a complete upgrade package of advanced manufacturing tech. Recently, Ford announced they had 3D-printed the largest metal part ever in the automotive industry: a custom hi-perf intake manifold for a '77 F150, printed using a powdered aluminum alloy material. The manifold had a complex web-like structure in its internal runners and passages, one that would have been near impossible to execute with old-style manufacturing methods.

The company has even been 3D printing custom hand tools that are designed for very specific tasks in the plant. Better still, Ford envisions downstream benefits such as dealership garages equipped with 3D printers that can produce replacement parts onsite, saving time and money, and software that owners can download to print their own custom parts.

Tires are, of course, produced in molds. The molds have to be able to turn out tires that meet exacting standards and tight tolerances. Especially in the case of winter tires, the "tread negative" of the mold has a complex pattern of grooves and sipes, razor-thin slits that are designed to add thousands of biting surfaces to the tire's tread face. Holes and vent valves have to be accounted for in the mold's design, and for decades these molds had to be produced by a sand-casting process. It was a time-consuming, exacting, multi-step method that, in later years, involved using CNC technology to cut a mockup of the mold into wood, then another one from gypsum.

Michelin has now eliminated the sand casting steps and instead uses 3D metal printing to produce these complex manufacturing molds. Starting in 2015, Michelin partnered with Fives, one of the leading manufacturers of industrial machinery, and founded AddUp. AddUp serves as an incubator for research and manufacturing, controlling and managing the process from raw materials to finished product. They've also taken their expertise into fields as diverse as aerospace and medical devices, as well as Michelin's tire manufacturing.

Michelin's commitment to advanced manufacturing and 3D printing goes a lot farther than conventional tires, though. Their airless Vision tire, which debuted as proof-of-concept in 2017, has a "spongy" webbed structure that would be very difficult to manufacture with conventional methods and is designed for 3D printing production.

Watch Michelin's futuristic vision of how tires should be.

The Vision tire is also designed with sustainability in mind. Its rubber compounds include things like orange zest, molasses, citrus oils and recycled powdered tires. With partners, Michelin is working on ways to incorporate materials like steel, paper and even hay into tires. The company's vision for the Vision tire includes sensors for diagnostics or fleet management and 3D printers at tire shops that can impress a new tread pattern onto the tire for winter use or for a "retread."

A Few Things Still Stand In The Way

Manufacturing still comes down to dollars-and-cents decisions, and there are concerns about things like sunk cost and cycle time versus the equipment that's already in place, paid for and amortized. Widespread adoption of 3D will also set the bar higher for training, as workers will need an upgraded set of advanced manufacturing skills to work with the software.

In light of that, 3D printing really shows a lot of promise for aftermarket manufacturers who are producing small volumes of specialized parts (think the aftermarket suppliers for restorations of mid-'50s Chevrolets). It especially makes sense for vehicles where the OEM supply of those parts dried up long ago. Using digital scanning, a part can be modeled, reverse engineered and then reproduced down to the last detail. It's also a great solution for parts that would be very difficult and costly to produce any other way, such as this monobloc 8-piston brake caliper for Bugatti. Produced using titanium, the caliper is stronger and much lighter than a steel or aluminum unit. 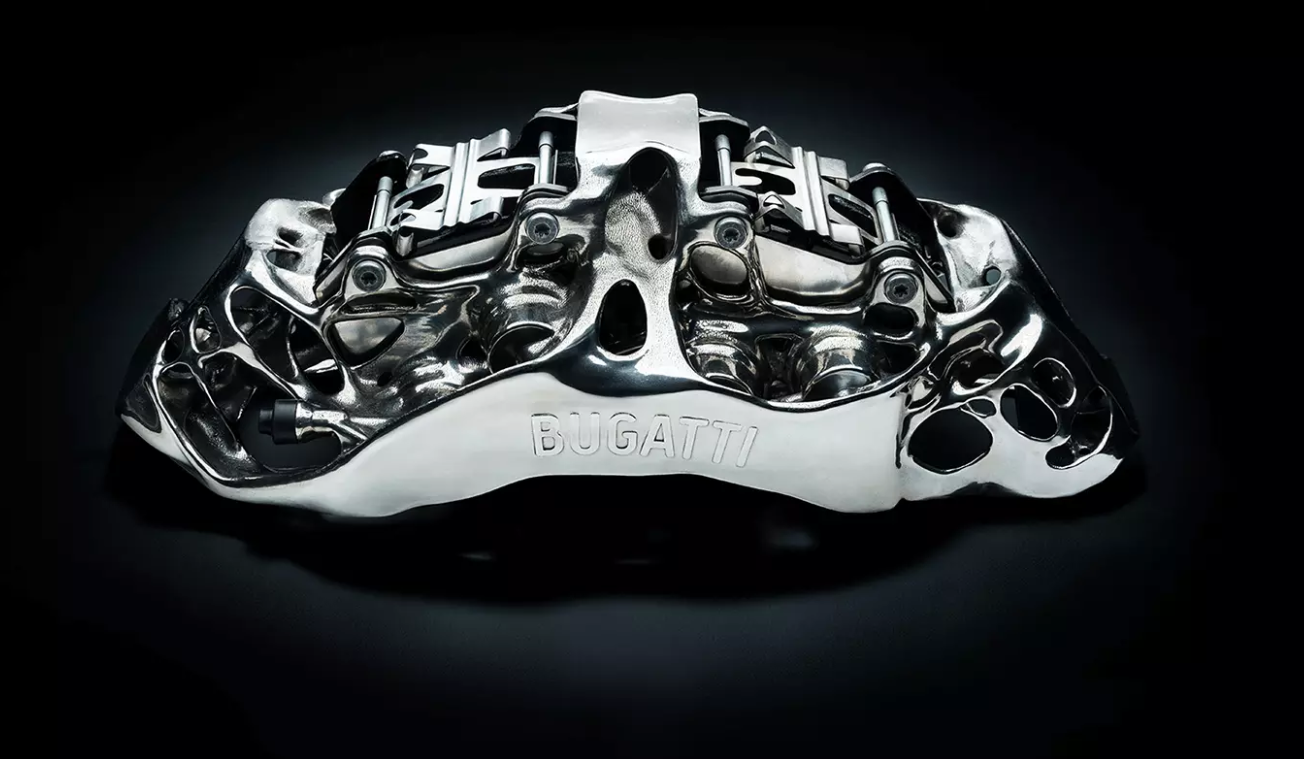 Still, there are new materials like advanced plastics (including heat-resistant materials) and carbon fiber-reinforced polymers that offer great potential for large-volume 3D manufacturing. These materials can also offer environmental benefits and reduced weight for parts. Along with increased, faster computing capacity, lower-cost equipment and improved software, it's likely that there's a lot going on behind the scenes that we don't yet know about. We're probably a few years away from a mass-produced, market-scale fully 3D-printed car, but the possibilities are pretty tantalizing.

What do you think of 3D printing car parts? Let us know in the comments.

Don’t Get No Respect: Wheel Hub Assemblies and Wheel Bearings