What To Do When Your Car Overheats

Seeing the temperature gauge slowly climbing as you drive? Or maybe everything is fine, until it's suddenly way into the red. All you know is that your engine is running too hot. It's a serious condition that you can't ignore, so here's what to do when your car overheats. 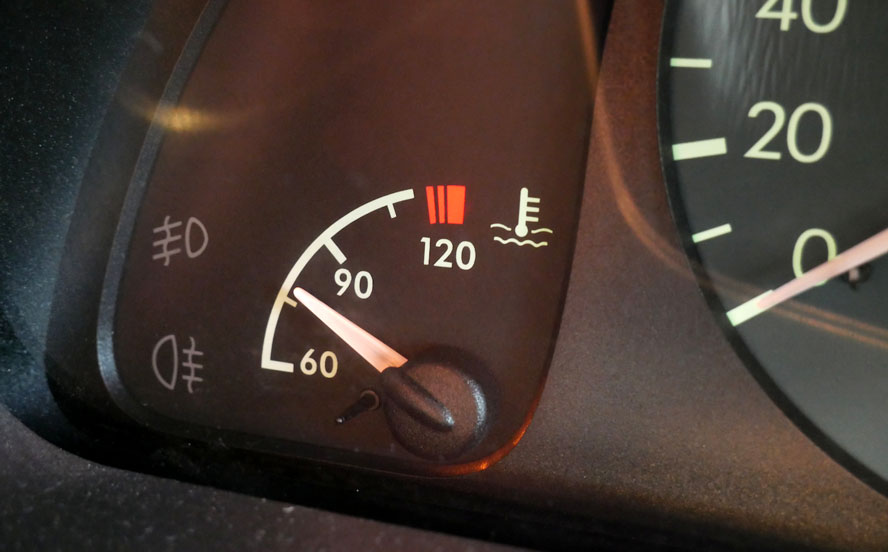 Can I drive with an overheating car?

If it's a stretch until payday, you might wonder if you can keep driving with the engine overheating. The short answer is no. This symptom causes a dangerous condition that can quickly become more expensive. While it's true that engine internals operate in an extremely hot environment, engine designs have a limit on the optimum temperature, and modern engines already have a higher operating temperature than older cars. Exceeding the normal heat range results in damage to more components, including warped cylinder heads, a cracked engine block, and it could even cause an under-hood fire. Get the overheating issue resolved before driving more. It's even more risky when you consider that many modern engines use aluminum blocks and heads, unlike the all-cast-iron engines of a generation or two ago.

If your engine overheated and you're sitting on the side of the road Googling this problem, give it a bit of time to cool down before taking a look—it should sit for at least 30 minutes before you open the hood. You can look for leaks or obvious problems, but everything is still too hot to touch. Give it another 30 minutes before attempting to work on anything in the engine bay. Wait until the radiator cap is cool to the touch, and use a heavy glove or rag over the cap to protect yourself from the heat.

If your temperature gauge shows normal operating temperatures around town but goes into the red when you are at highway speeds, you have a clue as to where to start looking for problems. Note: If you can't get off the road right away, you can try blasting the heat at its highest setting, as this will help draw heat away from the engine. If your heater doesn't blow hot air when you turn it on, that's a pretty sure sign your cooling system is low on coolant.

Engine cooling at highway speeds comes from external airflow through the grille and radiator. Like a NASCAR pit crew, make sure nothing is blocking the grille or radiator, like a plastic trash bag, causing a restriction of airflow. This could even be excessive dead-bug buildup after a long road trip. Clean that mess up. Also have a look inside the radiator and test the coolant. It could be a blockage inside.

If your vehicle gets airflow from underneath instead of a grille (think: 1995 Ford Taurus or Pontiac Firebird), check the condition of the air dam. This stiff plastic piece hangs below the front bumper cover to direct air to the radiator at highway speeds. When it breaks off, the lack of airflow makes temperatures climb.

If the above items check out, the thermostat could be faulty. This one comes with some other signs. Check for a broken thermostat by carefully placing a hand on the upper radiator hose when the engine is hot. If the hose is cold, the thermostat is stuck closed and needs replacing.

If your highway driving sees normal temperatures but the needle climbs in urban traffic, the radiator fans may be the problem. Use a flashlight and check the condition of the plastic blades to make sure one didn't snap off. Start the engine and let it warm up, checking to make sure the fans come on at operating temperature. If not, the fan motor could have burned out, or the coolant temperature sensor is suspect. Don't forget the simple stuff, like the electrical connector attached to the fan motor.

Overheating at low speeds could be as simple of a problem as a broken radiator cap. The modern cooling system needs to be air and water tight, and if the radiator cap seal is bad, you could leak a significant amount of coolant during every drive. When the engine is cool, have a look at the radiator cap gasket, and replace the cap if the gasket is torn or missing.

Overheating all the time

If your engine is running on the hot side, regardless of vehicle speed, you probably have a cooling system problem caused by a leak, resulting in low coolant or oil. When the engine is cool to the touch, check the oil level and the coolant level. If either is low, add the coolant or oil to the full line and go for a test drive. Watch the temperature gauge, but also watch for leaks anywhere you park. Monitor the coolant and oil levels before every drive for the next week. If you check the oil and it looks milky or frothy, chances are your engine is leaking coolant into the crankcase from a lower intake manifold gasket, cracked head, or blown head gasket. Another sign of a blown head gasket might be bubbles in the engine coolant while the motor is running, as gases from the combustion chambers back up into the cooling system.

If the fluid levels drop and the temperature rises again, the engine is either burning or leaking the fluid. Jack up the vehicle, place jack stands underneath, and use a flashlight to look for any signs of leaks. There are several possible leak points for coolant, including the radiator, radiator hoses, water pump, thermostat housing, head gasket, intake manifold, and heater core. Oil leaks can happen from the oil pan gasket or drain plug, timing chain cover, main seal, or oil pump.

5 Hacks, Tips and Tools to Warm Your Winter