Signs Of A Bad Car Battery

It's easy to tell when your car is having problems, but figuring out the cause of those problems can get confusing. Do a quick search online, and you'll find overlapping symptoms for bad batteries, starters, alternators, and a host of other engine-related issues. Complicated issues are best left to the pros at your local shop, but don't rush to the most dire conclusion just yet. When it comes to diagnosing cars, the best advice is to keep it simple. In this case, that means starting with the battery.

Usually, a battery will die slowly and provide some advance notice. There are exceptions, of course, such as when an internal failure occurs as a result of a bad cell. When that happens, you're likely not to have any warning signs and will find your car or truck in need of a jump every time you start it up. But for many, when a car battery dies — as they certainly will at some point — one or more of the following symptoms are usually present.

This seems obvious, but it's worth mentioning. If your battery is more than a few years old, suspect that it may be nearing the end of its life. All parts wear out eventually, and batteries are no different. Repeated cycles of discharging during starts, extreme temperatures (both cold and hot) and other factors all cause batteries to drain over time. Look for a round sticker that has a month and year on your battery if you don't know when it was replaced last. A sticker that reads 09/15, for example, is living on borrowed time.

This is the classic bad battery symptom. You turn the key and the engine cranks, making a sluggish whirring sound for longer than usual before the engine starts. If this is happening, it's time to get your battery tested.

3. Cranks or clicks, but won't start

If you only hear a click when you turn the key, this could also be an indication that your starter is failing. If you try to jump start your car and still only hear a click, you might not have a battery issue. Sometimes starters will work intermittently for a while before completely dying, so repeated attempts at turning the key can help you figure this out. A starter might start after five or six attempts, whereas a discharged battery definitely will not.

In this scenario, it's likely that your battery is strong enough to provide power to your electronic components, but not strong enough to fully energize the starter. This is another scenario when you might be dealing with a bad starter. In this case, jump starting your car and multiple attempts turning the key are also your next steps.

You know how you're constantly having to charge your old phone? Car batteries are no different — as batteries age, they lose their ability to hold a charge as long. If you have an older battery that doesn't seem to hold its charge as well, it's probably time for a new one.

But what about if your battery is new and requires jump starts? There are a couple of possibilities here. The first is the simplest: you have a battery that is prematurely wearing out. Check your warranty if testing the battery indicates replacement is needed.

Less commonly, there may be an electronic component in the car that draws a current even after the car is shut off. There are many sensors that operate this way by design, but they don't draw enough power to drain the battery. When a component such as a radio or light bulb remain on when they shouldn't, you'll likely find your battery dead when you're rushing out the door for work in the morning. For more on this condition, read about parasitic drains. 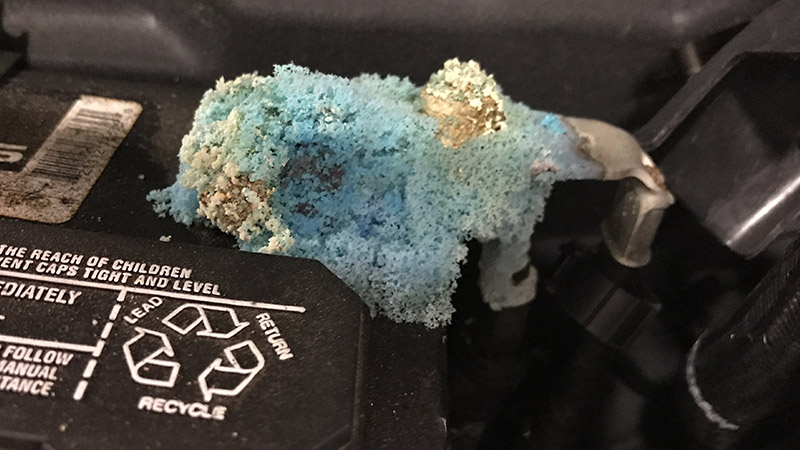 When was the last time you looked at your battery? If your engine is sluggish when you turn the key, pop your hood and take a look at the battery. If you see a lot of fluffy blue corrosion — usually at the positive terminal — or a clear film across the top of the battery case, your battery is either giving off acidic fumes or it's leaking the actual battery acid. Both of these conditions create resistance between the battery and the cables, which lowers its voltage and, therefore, efficiency.

Want to do a quick check to see how much voltage you're losing across your case or between the post and the cable? Set your multimeter to measure DC volts and place one lead on the case and the other on the cable — it doesn't matter which lead goes where. Ideally, your reading will be .3 volts or less. More than that means you have excessive resistance.

You can clean your battery and probably see improved performance, but be aware that this is just a short-term fix because the corrosion will return. Many professionals would advise replacing the battery and possibly even the positive terminal end if it's also heavily corroded. 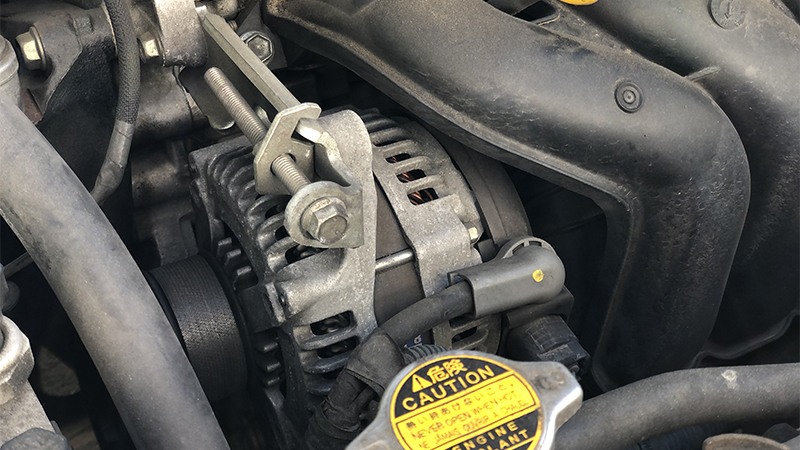 WHAT ABOUT THE BATTERY LIGHT?

Time to clear up a common misconception. Your battery light does not indicate a problem with the battery. It's normal for your battery light to come on and then go out right when you start your car. But if it comes on while you're driving, that's a clear indication that your charging system has a problem, and it's often the result of a failing alternator. Your battery's job is to start the car — it's your alternator that generates the power that keeps it running and recharges the battery.

A more helpful way to interpret that battery light is that it's warning you that your car is running only on battery power. If this happens, you will be able to keep driving for a little while. If you do, you'll find that your electronic systems start to shut down. Your headlights will likely be dim, you may lose seat heaters, radio, etc. Because you won't be able to drive for long solely on battery power, you should keep driving to a minimum. Either have your alternator replaced at a trusted shop, or if you're up to the task, head over to Advance for free alternator testing before you purchase your replacement.

Also note that when your alternator fails, such a strain is placed on the battery that it often needs to be replaced as well. Whether you just want a test of your starting and charging system or you need a replacement battery, Advance Auto Parts is happy to assist and get you back on your way. Learn more about why you should choose a DieHard car battery.

*Car battery testing and installation available on most automotive vehicles, at most locations, unless prohibited by law.

It's the age-old story of the English teacher who burns out, has an early midlife crisis, and becomes a mechanic. After a successful career in Toyota and Lexus dealerships, Lisa has recently put the wrenches down. These days, she maintains her ASE master certification and enjoys teaching others about cars through her business, Fired Up Automotive. Lisa is particularly passionate about providing women a safe space to learn through local car care clinics.

The Cost Of An Alternator Replacement

Basic Auto Battery Maintenance and the Tools to Make It Happen

How to Jumpstart Your Car Battery