How the Police Car Evolved & What Makes It Different

Patrol cars, squad cars, cop cars, police cruisers... They go by several names but have a common set of characteristics: They have to be reliable, rugged, and fast, and feature special equipment for law enforcement. Police vehicles are a subject of fascination for many—from toddler age on up—and we'll go into how they arrived in their present state.

In the 1920s and '30s, police departments wanted vehicles that could catch up with the fastest cars on the roads, and motorcycles became standard as a result. That began to change in 1932, when Ford introduced the flathead V8.

V8 Fords were a groundbreaking design for the time, with more horsepower and torque than just about anything on the market, and Fords became the No. 1 choice for police until the 1960s. Clyde Barrow (of Bonnie and Clyde fame) knew about the flathead Ford's performance, even writing a letter to Henry Ford that was a testimonial to the car's speed.

It was also the 1930s when the nature of police departments and their responsibilities changed. States formed their own highway patrols as traffic on highways picked up. Cities were growing and needed a stronger, more mobile police presence. Interestingly, in the 1920s, the NYPD had a fleet of convertible squad cars, and cops were required to drive with the cars' tops down so people could readily see that they were cops. They could only put the tops up when they had permission from upstairs, and snow or rain might not even warrant that permission.

From the beginning, police departments recognized that their vehicles needed purpose-built equipment to help cops do their jobs. Even the first-ever police vehicle, an electric wagon built for the Akron, Ohio, PD in 1899 (top speed: 16 mph) was equipped with electric headlights, a gong, a stretcher, and a cage for prisoners.

One early priority was for headquarters to be able to communicate with cars in the field. In the '20s, radio was starting to blossom, and radio dispatching was a great fit for police work. Unfortunately, early radio sets were big, bulky, and fragile, and the electrical system of a Model T Ford wasn't sufficient to power a radio. A pair of inventors were able to build a radio that could fit in the back seat of a Model T, but it was battery-powered—and the batteries had to sit on the running board. By the '30s, radios had become common for police work but were still only receiving sets, and cops had to stop and use a police telephone call box to check in.

The Modern Police Car Is Born

In the post-WWII years, manufacturers started to offer specialized police-package cars, starting with Ford's 1950 model. It wasn't long until GM, Chrysler, and even smaller companies like Studebaker and Hudson got into the market with their own purpose-built police models. The early '50s was also the dawn of the horsepower race in Detroit, and before long, police cars were sporting big, powerful engines that could keep up with anything on the road.

Speed and horsepower weren't the whole story, though. Like today, police-package vehicles had beefed-up brakes, high-speed tires, more robust electrical systems to power radios and other accessories, and a certified speedometer for pacing speeders. They also came equipped with stiffer suspensions for better handling and cooling systems that could take long hours of idling or high-speed pursuits in hot weather.

Here's a look at some successful police cars from over the years: 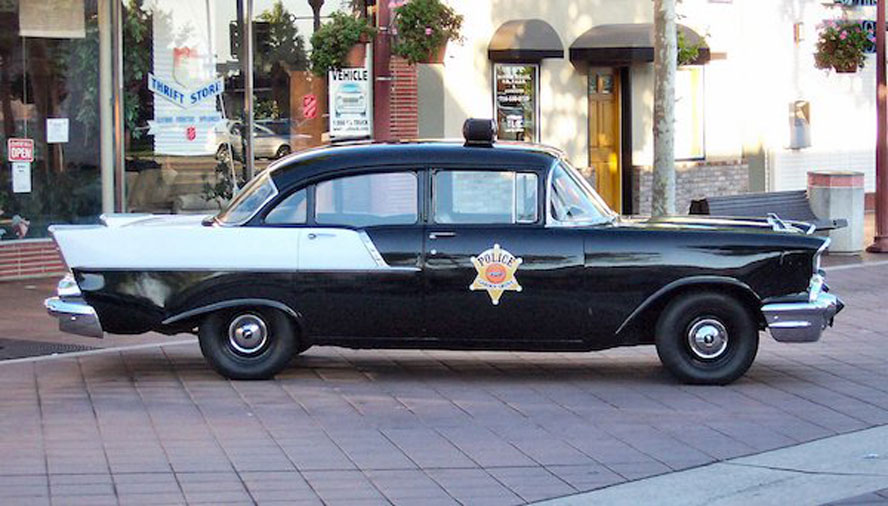 Since Chevy's mid-'50s overhead valve V8 was such a groundbreaking engine for its time, it makes sense that mid-50s Chevy sedans would be great cop cars. They had the size, power and durability for the job (without being too gigantic) and were available at a price point that PDs and towns loved. 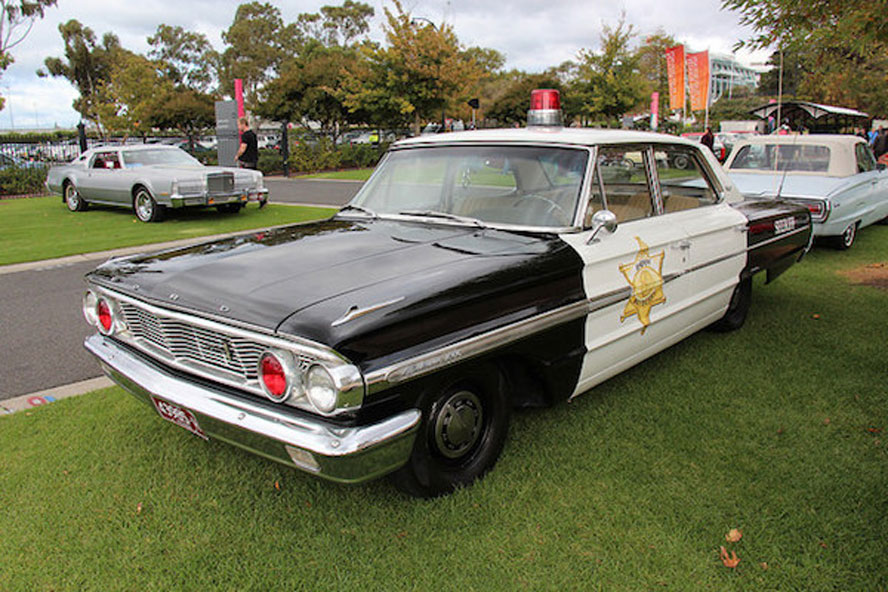 You might remember big Galaxie cop cars from "The Andy Griffith Show," topped with a single red gumball machine on top (patented in 1947) and a big fiberglass whip antenna on the rear bumper. Galaxie sedans were available with a powerful big-block V8 that was perfect for police work, along with a huge trunk for equipment and a back seat that could take in a couple of prisoners. 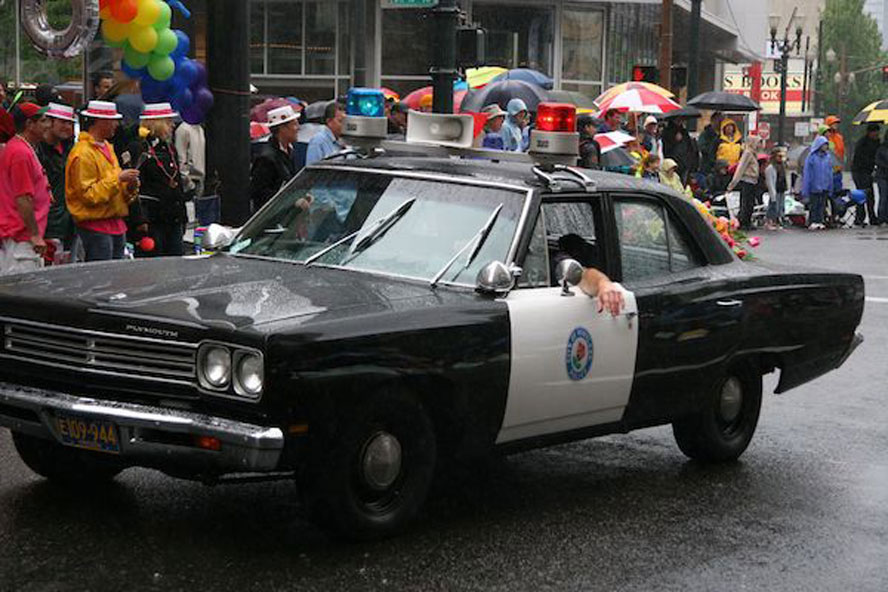 In the late '60s and early '70s, Chrysler products dominated the police market, and the 383 or 440 V8-equipped Coronet/Satellite was a favorite with highway patrols everywhere. The Coronet could top out at 145-150 mph (cops called them "four-door Roadrunners") and had a tough, authoritative look that commanded respect. Dodges also had a reputation for a bit better handling thanks to their upgraded suspensions and tires. 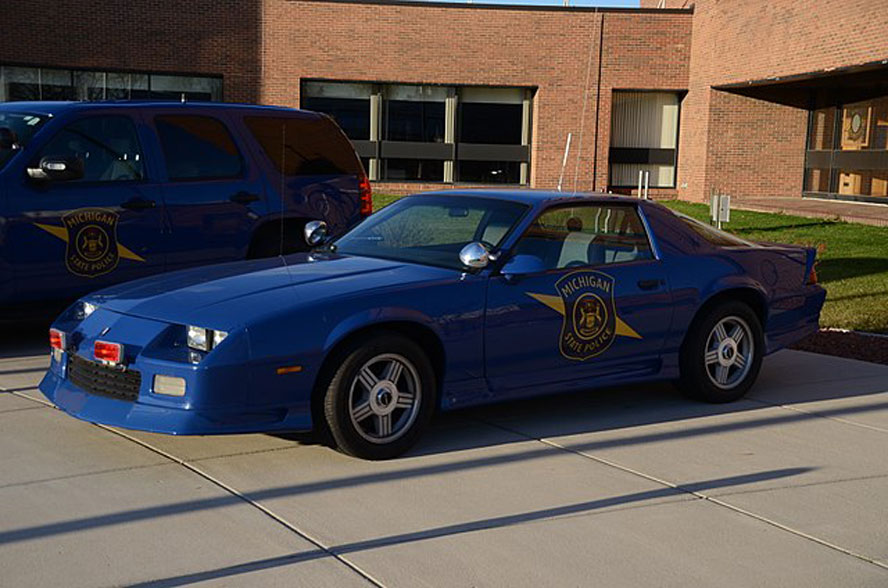 The Texas Department of Public Safety and California Highway Patrol both embraced the Camaro in the late '80s and early '90s, at a time when most vehicles were pretty low-performance. It made sense: The Camaro was equipped with parts from the Z28 and heavy-duty police goodies, including the 275-hp Corvette LT1 V8, which could get the car up to 60 mph in under six seconds and had a top speed well upward of 150 mph.

Not content to let Chevrolet corner the market on high-performance police pursuit vehicles, Ford rolled out a police version of the Mustang in the early '80s. This cop version of the 5.0 Mustang was beefed up with the usual police goodies and soon became a popular choice with state police departments everywhere. Interestingly, it was also used as a chase car by the USAF, specifically to advise pilots who were landing the U-2 spy plane. 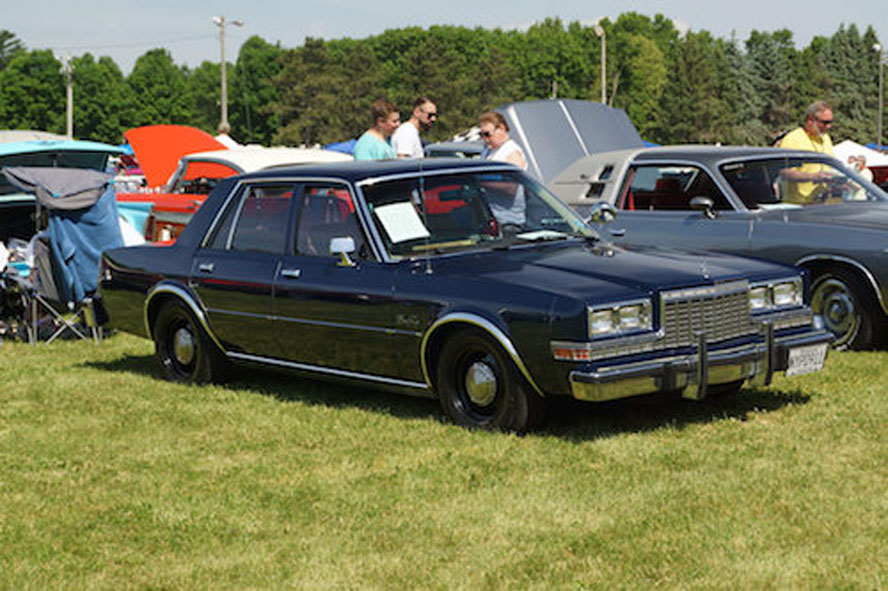 1980s Dodge Diplomat/Plymouth Gran FuryNo, they weren't really high-performance, but the boxy, dated Diplomat was tough and nearly impossible to kill. The Diplomat could trace its roots back to the unloved F-body Aspen, which was in turn an update of the Pleistocene-era Dart model. Civilian customers saw the Diplomat/Gran Fury as a stodgy relic of a car, but its conventional drivetrain and chassis made it a favorite of PD's everywhere. Plus, it just had the carved-from-a-block-of-soap look of a fleet vehicle for police (or taxi) use. 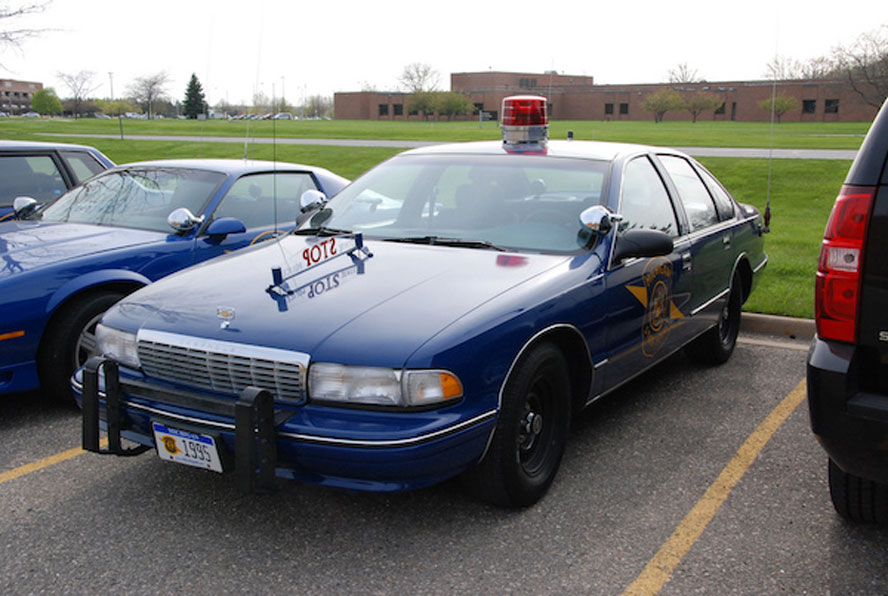 The big, tubby Caprice Classic was GM's last full-size rear-wheel-drive sedan, and the 9C1 police package made it a tough, durable, roomy police car that was a favorite of city, county, and state police everywhere. The Caprice Classic was available with the Corvette LT1 300-horsepower 350 V8, and since the fourth-generation Caprice had a fairly short production run, a cottage industry emerged to keep these cars on the road and in service after they were no longer in production. 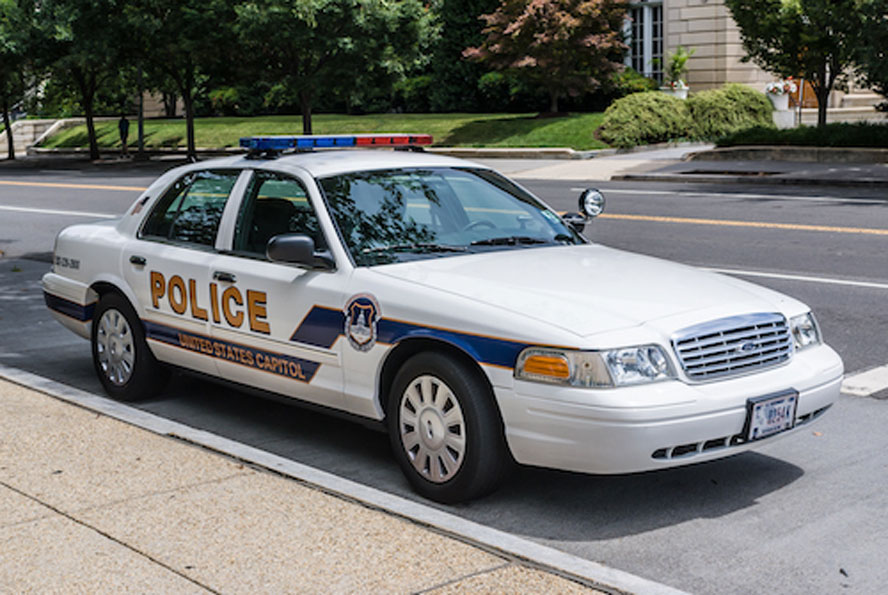 Stretching back into the late '90s, the Ford Crown Vic was practically synonymous with "cop car." It was a dated platform even back then, with body-on-frame construction and a basic design that harkened back to the late '70s. But it was a reliable, inexpensive, easily maintained workhorse for police and fleet service both. While the Crown Vic wasn't a road burner in terms of power, it had predictable handling and a comfortable interior for long hours on the road. Sharing the same platform as the Mercury Grand Marquis and Lincoln Town Car, there are thousands of Crown Victoria Police Interceptors still on the road in taxi service or in private hands, sometimes with 300k-plus miles on the odometer. The CV was discontinued in 2011, but you still see them in police service from time to time. 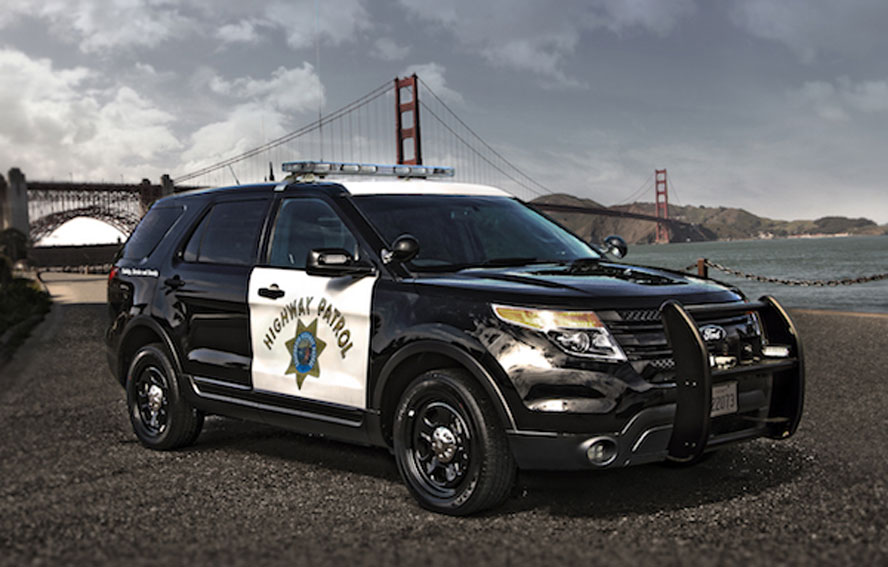 The best-selling police car on the road today isn't even a car —it's a special version of the popular Ford Explorer. The cop Explorer offers all-wheel-drive, a 365-horsepower 3.5 EcoBoost V6, enhanced traction control and ABS, and a host of other police features. While it might seem a little odd to see police driving SUVs, the Explorer's roominess and overall toughness make it a perfect choice.

What Makes A Cop Car?

Obviously, most police cars are equipped with a powerful engine and a suspension that's tuned for better handling. But what else goes into the design and features?

So the police car has come a long, long way from the Blues Brothers' clapped-out '74 Dodge Monaco. They've upped the game in terms of technology, performance, and even comfort for officers. Meanwhile, let's hope none of us get to see them from the back seat.