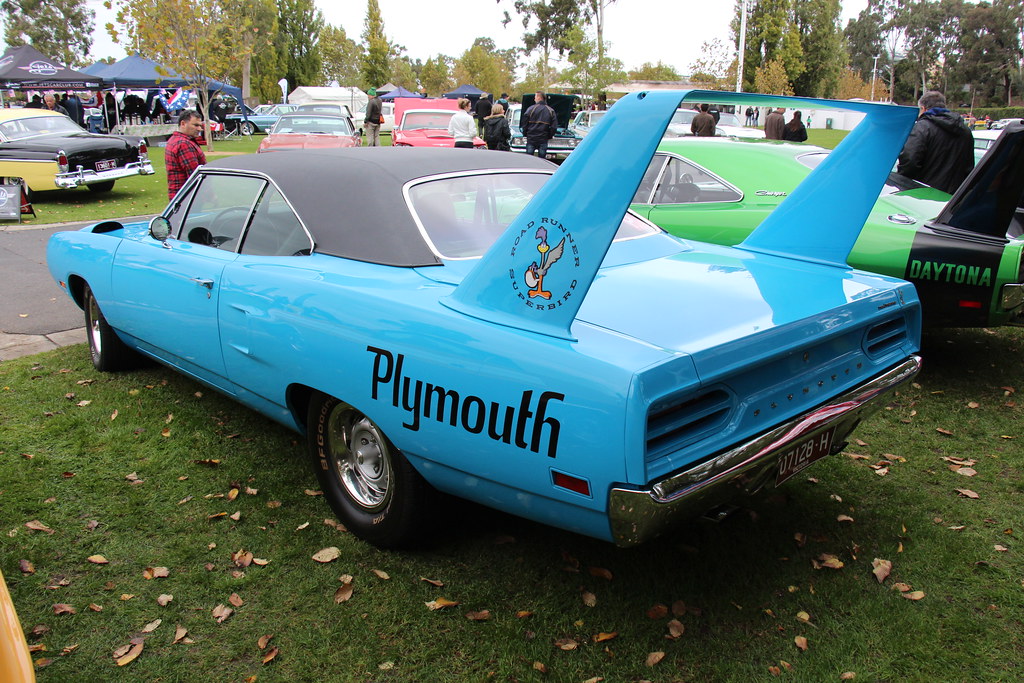 The 1960s produced some wildly over-the-top muscle cars from Detroit, but few are wilder than the Dodge Charger Daytona and Plymouth Superbird. Before we get too far into that, though, it's important to understand some of NASCAR's thinking in those days and how those cars came to be.

First, we should go back a few decades and think about the days when stock cars were truly "stock cars" and racing was a run-what-you-brung affair. In the late 40s and early 50s, there were cars on the track that still had a factory bench seat and AM radio, with the windows rolled down and headlights taped over for "safety," without even the protection of a roll cage. Stock cars were literally that — cars that were in factory trim with OEM equipment throughout.

In light of that, for years NASCAR stuck to its "homologation rules." They knew manufacturers had an unlimited budget when it came to developing cars for the track, and sought to level the playing field a bit for other comers. They mandated that at least 500 copies of any NASCAR-bound car from an OEM manufacturer had to be available to the public - or at least one for every other dealership from that manufacturer.

That's not to say there weren't some serious modifications to the ones that ended up on the round-and-round tracks, but if you look at pictures of stock cars up through the 80s, you'll see that at least the front clips don't look a whole lot different from someone's daily driver. In fact, as late as 2003 the rules required the hood, roof and decklid to be identical to OEM equipment.

Those homologation rules in the '60s even required that suspensions had to be close to stock versions and limited the amount of engine modifications a team could make. For instance, bored-out engines were a no-no and stock cars had to use carburetors rather than fuel injection. Still, that didn't keep Ford from developing an overhead cam 427 V8 for the track — and then offering it in limited numbers for customers. Marketing departments took the slogan "Win on Sunday, Sell on Monday" and ran with it.

In '68, Dodge had a winner with the popular Charger. Mechanically it was not a lot different from a Coronet, really, but its sleek coke-bottle styling and aggressive profile were a hit with buyers, making it an iconic American muscle car to this day.

On the track, though, the Charger had problems. For '68, Dodge's OEM team replaced the Charger's concealed-headlight front end with a Coronet-style nose and replaced the recessed rear window with a flush-mounted one, hoping to clean up the car's aerodynamics. The Charger 500, as it was called, was offered to the public with a production run of 392 copies, but it didn't perform that well at high speed on the tracks. The washout of the Charger 500 even resulted in Richard Petty leaving the Mopar team for Ford (for a while, anyway). It was clear that aerodynamics were going to be the game-changer for the oval tracks. Thus, it was time to go back to the drawing board and the wind tunnel.

For '69, the Charger Daytona rolled out as an "aero-car" to compete with Ford's Torino Talledega and Mercury Cyclone. The result was a Charger with an 18" fiberglass extension in front and a wild "wing" about 24" tall above the trunk lid. The development process for the Charger Daytona involved not just wind-tunnel testing (at Lockheed) for drag coefficient, but the team borrowed engineers and instruments from Chrysler Aerospace in Huntsville, Alabama. With a trunk full of accelerometers, sensors, brush recorders, data recorders and other tools originally developed for Chrysler's engagement in NASA's space program, the Daytona Charger took to the test track for development. It's worth noting that Chrysler even brought rocket engineer John Pointer on board from Huntsville for the Charger project.

At the Chrysler Chelsea Proving Ground, drivers had strict orders to not exceed 190 mph. That number fell by the wayside with the Daytona Charger as it clocked 204 mph on the test track. The car's performance was an earth-shaker at Chrysler, with only top company executives being informed of this new record. The Daytona Charger made its debut on the NASCAR circuit the same year, and went on to win seven of ten major races that season. The aerodynamic modifications did pay off, with a pronounced downforce from both the nose and rear-deck wing.

Daytona Chargers on the Street 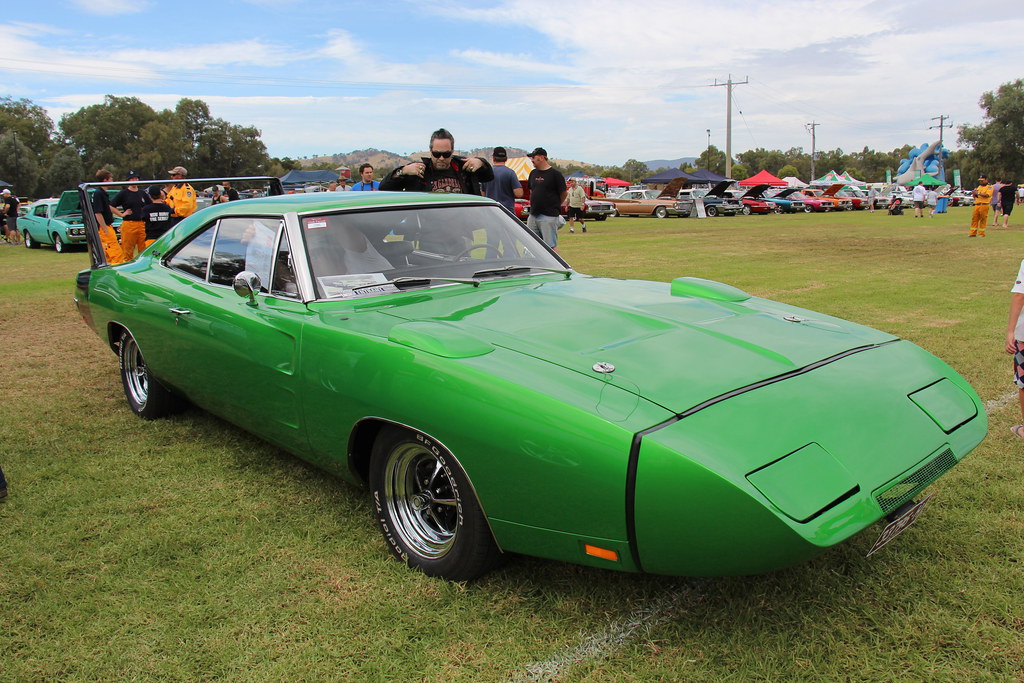 As we mentioned, 500 copies of the Daytona Charger were offered for consumers. Along with the outlandish aero modifications, they featured functional air scoops on the front fenders for cooling, a flush back window, specific front fenders and hood (that made it onto the '70 Charger), stainless-steel A-pillar cover and heavy-duty suspension and brakes. The car was offered with a 440 Wedge V8 or 426 Hemi V8, with 390 horsepower or 425 horsepower respectively, and the buyer's choice of a Torqueflite automatic or four-speed manual. Of course Mopar sold them in wild colors like Plum Crazy Purple, Hemi Orange, Sublime, Green-Go, Curious Yellow, Panther Pink and Go Mango.

The result was an insane-looking cop-bait muscle car that, curiously, performed like a stock Charger with the same drivetrain, owing partly to the fact that it weighed about 300 pounds more than an off-the-shelf Charger. The following year, a Plymouth version was released, based on the Roadrunner (complete with beep-beep horn). There are a few differences between the two: the nose on the Superbird is a bit shorter, the rear deck wing was moved forward several inches and the air intake for the front wheels is at the bottom of the nose rather than the fenders. It's said that the changes heightened drag somewhat and made the Superbird a tick or two slower than the Charger Daytona. 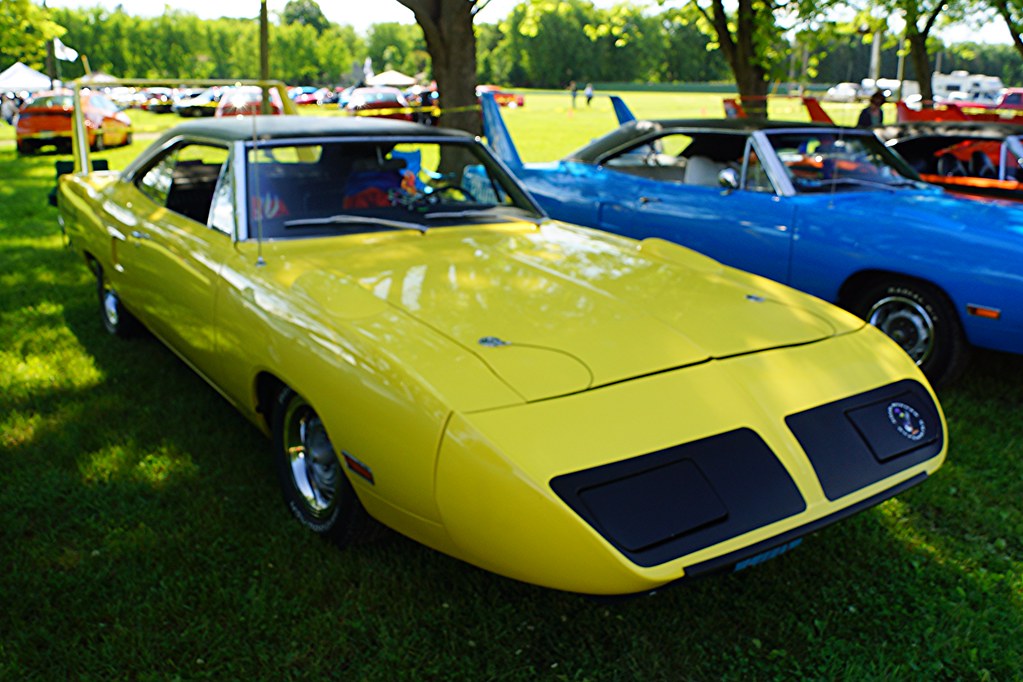 It's believed that a grand total of less than 2,000 Plymouth Superbirds were produced. Considering that the Roadrunner was a more stripped-down vehicle than the Charger, the Superbird was available with fewer options than the Charger Daytona. They actually weren't a hit with customers, as the fiberglass nose made parking a headache and the styling was a little too extreme. Many were supposedly converted back to Roadrunners before they found buyers.

The Superbird even made it into the movies as the character of Strip "The King" Weathers in the movie Cars (voiced by Richard Petty himself):

The Charger Daytona and Superbird had pretty short runs on the NASCAR circuit. After a couple of seasons, NASCAR limited the displacement of "aero" cars to 300 cubic inches, putting big-block competitors like the Mopar cars, Torino and Cyclone out of the running.

If you're lusting for one of these super-scarce Mopars, you'd better have good credit or a pretty fat bank account. 440-equipped versions have sold for upwards of $100,000, and a Hemi-equipped Superbird (of which fewer than 150 were built) recently sold for around $900,000. Still, these Mopar stablemates are a representation of the anything-goes period for design and marketing during Detroit's classic muscle era.

What do you think of these race-inspired classic cars? Let us know in the comments.