What causes a dog tracking car?

Have you may have seen a vehicle that didn't look quite right as it was headed down the highway? Maybe the car look like it's moving sideways while traveling in a straight line, or, in a more extreme instance, you may have been able to see all four wheels while following it. 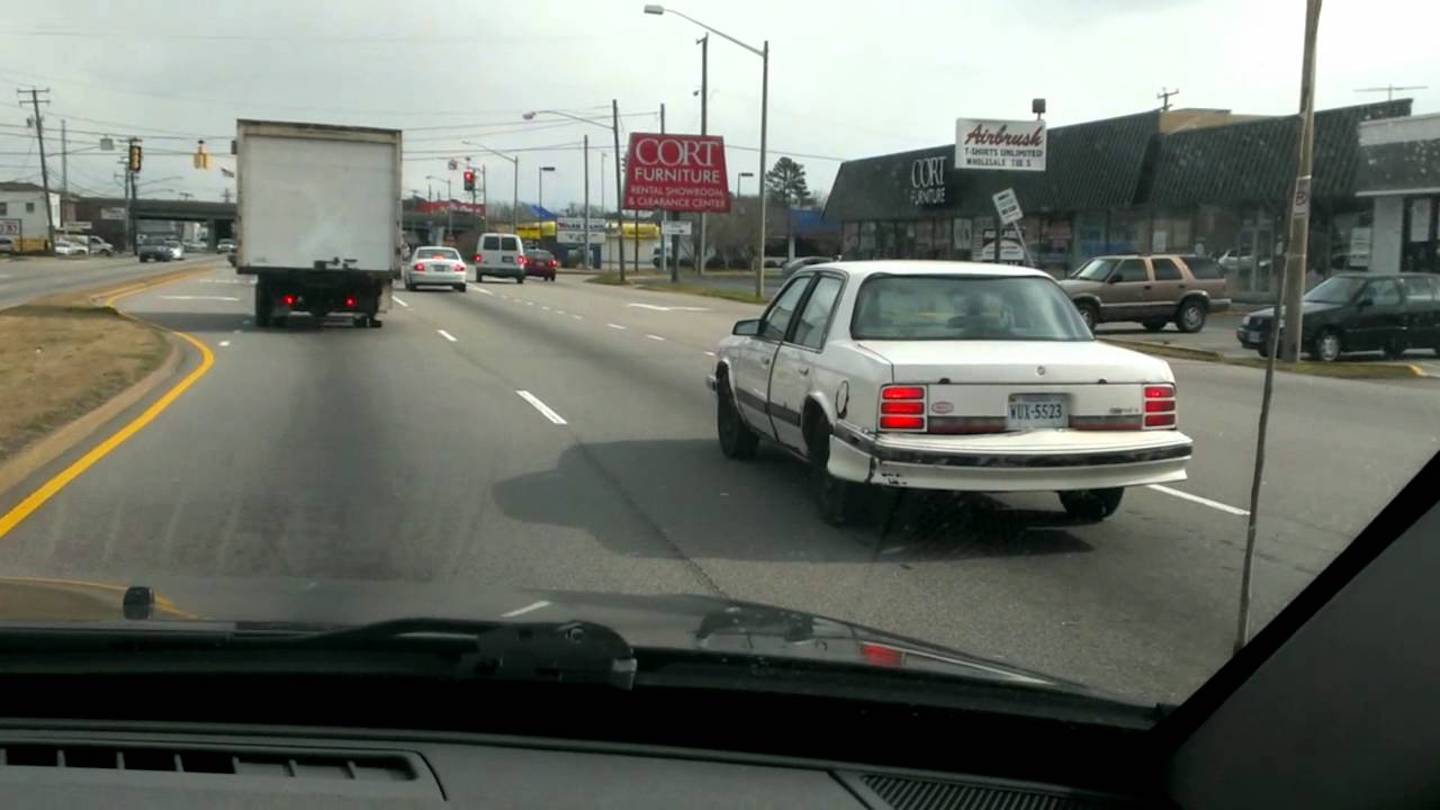 This is what's referred to as "crabbing" or "dog-tracking," and it often occurs when a vehicle has been in a collision severe enough to bend the frame. A sprung frame, or a frame that's taken a hard hit, isn't the only thing that can cause dog-tracking, though.

A few words on suspension and frame geometry

If you're familiar with four-wheel alignment, you may have heard the term "thrust angle." You can think of thrust angle as an imaginary line that runs down the middle of the vehicle's frame. On a live-axle vehicle like an SUV or truck, the axle should be perfectly perpendicular to this line, and the thrust angle should be zero or close to zero.

Most trucks still have a leaf-spring rear end, a design that goes back to 19th century stagecoaches and buckboards but is still in use today because it's a proven, tried-and-true suspension. Leaf springs (also known as a "Hotchkiss" rear suspension) are four or more progressively longer strips of steel that are held together in a "leaf pack." The leaf pack is bolted to the frame at its front and rear, held together with a pin and attached to the underside of the rear axle using shackles.

When the truck goes over a bump, the rear axle pulls the leaf springs upward in response to the bump. As the spring flexes, it actually becomes longer and the spring's rear shackle can rotate and pivot in its mounting point on the frame to accommodate this movement.

The leaf pack serves to locate the rear axle in relationship to the frame and also helps handle some of the forces to which the frame and axle are subject. The leaf pack is held together by a center pin that goes through all the layers of leafs and is then shackled to the axle's leaf perch with U-bolts.

If the center pin falls out or if a mounting bolt fails, it can allow fore-and-aft movement of the axle. Thus, if the axle slides forward on one side, it'll cause both rear tires to toe in one direction and constantly try to steer the vehicle in that direction. A loosened U-bolt or mount could be enough to cause a dog-tracking condition, or even a set of leaf springs that have lost their arch on a tired vehicle that's been worked hard. Also, this kind of problem can be the result of a poorly installed lift kit on a 4x4 truck, with parts that have come loose or an installation that has actually thrown the chassis and suspension geometry out of whack.

Some trucks do feature a thrust-alignment plate that allows for some adjustment to the leaf pack's center pin, aligning and moving it relative to the spring perch and helping to correct dog-tracking. On vehicles with independent rear suspension (and not a live axle), the toe might be adjustable (to a point) to correct this problem. Needless to say, this kind of misalignment can also be enough to put a lot of stress on the drivetrain, especially the driveshaft and U-joints.

Why would a vehicle crab down the road

If it's not a problem with the thrust angle, chances are the vehicle has been in a collision and taken a hard enough hit to distort the frame, or there's enough rust on the frame members to weaken them and cause a distortion. Vehicles with a solid axle and control arms can also have bent control arms from an accident or hard curb hit. Frame-straightening machines can correct a sprung frame, but if the vehicle's more than a few years old, chances are it sustained enough other damage in the collision to call it a total loss to start with. Considering that today's vehicles are built with lighter-weight frames and subframes as crumple zones, it can take a lot less of an impact to cause frame damage than it did on a '70s Buick.

One thing is for sure: If you see a vehicle that's crabbing down the road or dog-tracking down the highway, you can bet that it's a handful to drive, with atrocious handling and road manners, and it might even be structurally unsound. Give that driver some room!

Symptoms Of A Bad Tie Rod

What's the Difference Between Shocks and Struts