Disc brakes can develop a number of problems that can seem too difficult for the average person to diagnose and repair. The calipers can seize up or develop leaks that will cause the car to pull to one side, especially when the brakes are applied more rapidly. They can also develop noises that may or may not indicate major problems developing. We'll walk through some of the problems that can cause these issues and how to remedy them. 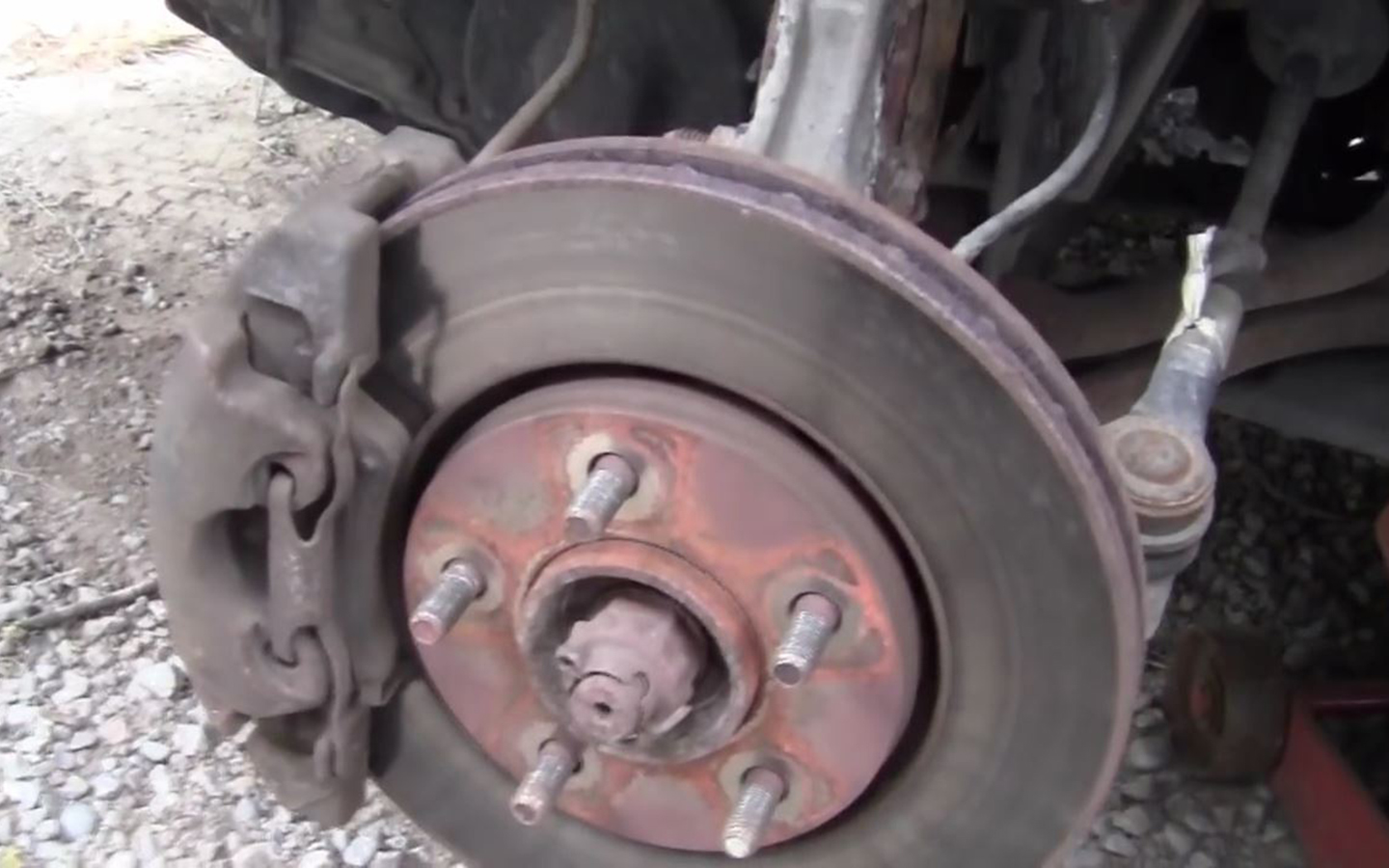 All images by Mike Aguilar

You hear a screaming sound coming from the front of your car. There are two reasons this may happen. The most likely reason you're hearing this sound is that it's time to install new brake pads. What's happening is that a small metal tab on one or both of the pads is making contact with the brake rotor, indicating that the friction material on the pad(s) has worn to the point that this metal tab touches the rotor and causes a squealing sound. Strangely, this metal tab is called a wear indicator.

Sometimes the pads will squeal or scream even when they've got plenty of friction material left. When you hear the squeal/scream from the front wheels and there's still plenty of friction material, the squeal is usually caused by the pad(s) vibrating as they contact the rotor(s). This can be remedied by removing the pads, beveling the pad edges, and installing anti-vibration shims and/or using a brake lubricant on the hardware and other contact points. NOTE: This is an area in which the quality of the replacement brake pads makes a pretty big difference. Poor-quality pads often make noise. 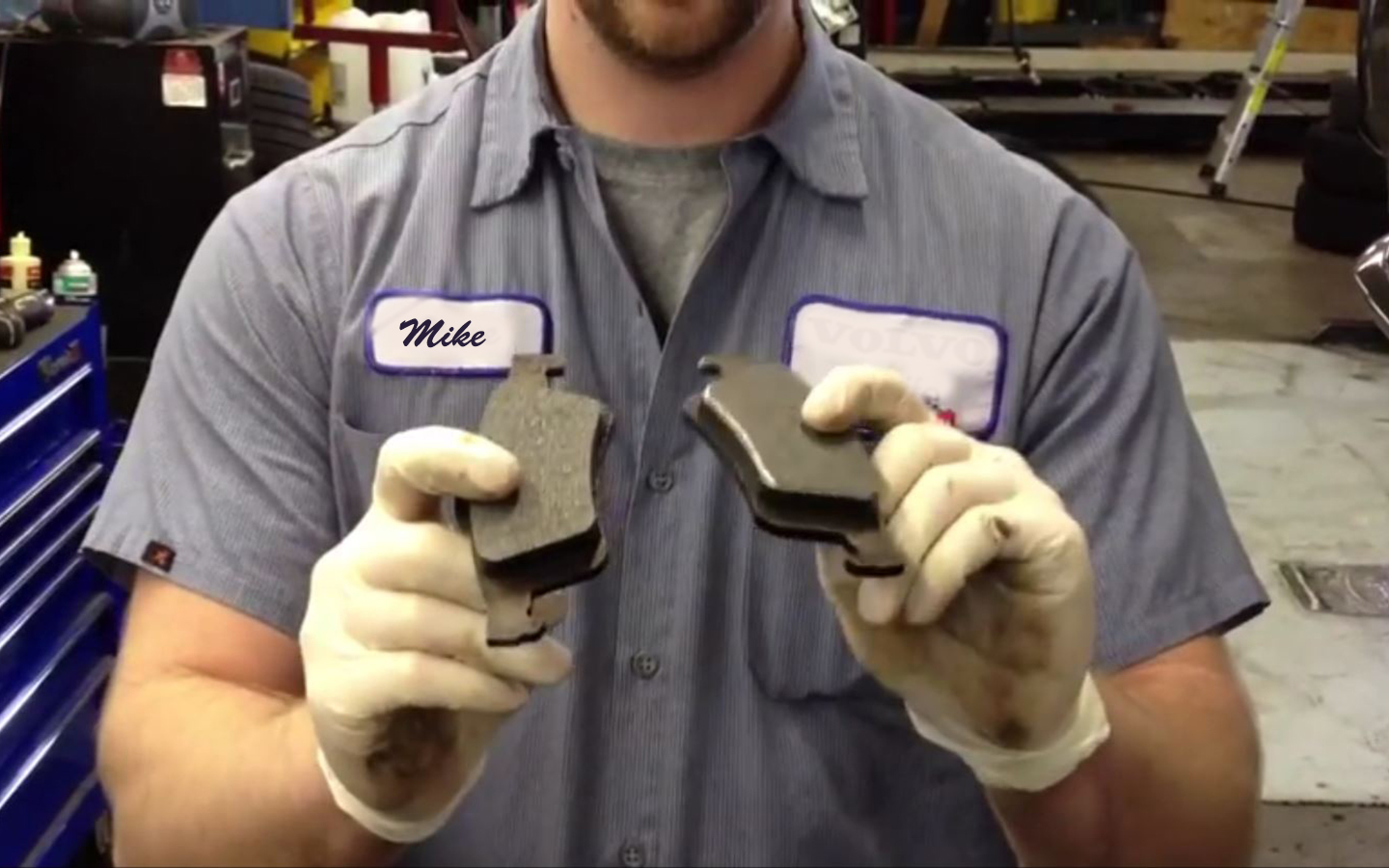 In certain circumstances, this isn't going to correct the problem and you're going to need to take an extra step. In these situations, what's happening is that sharp edges on one or more of the brake pads are catching in grooves in the rotor, causing the vibration. The fix here is to remove the pads from the calipers and chamfer or bevel the edges of the pads using either a sanding wheel or a file. The important thing here is to make your edge beveling even all around the pad and then to use brake lubricant when reinstalling the pads.

In those cases where this noise starts shortly after a brake job, the cause is usually what's known as “record grooves" in the brake rotor. The brake technician replaced the pads and turned the rotors but forgot to put what's known as a “non-directional swirl" on the rotor after turning. The sharp edges of the pads are catching in this groove and vibrating. A quick fix for this is running a sanding pad on a drill around the rotor to remove the grooves and beveling the pads. Use a fine sanding pad! You can also replace the rotors—Advance's come with a nondirectional finish.

The slight pull to one side at all times

This one can be tricky, as it also resembles an alignment problem. You're driving down the road and your vehicle wants to drift to one side or the other. You look at the tires and the wear pattern looks good, even across the whole tread. This could be caused by a frozen pad that isn't retracting when you take your foot off the brake pedal. Take a look at the pads on both wheels. You'll notice that one (maybe both) pad(s) on one side has excessive wear when compared to the other pads. You might also notice an excessive amount of heat on one wheel due to the friction from the dragging pad. 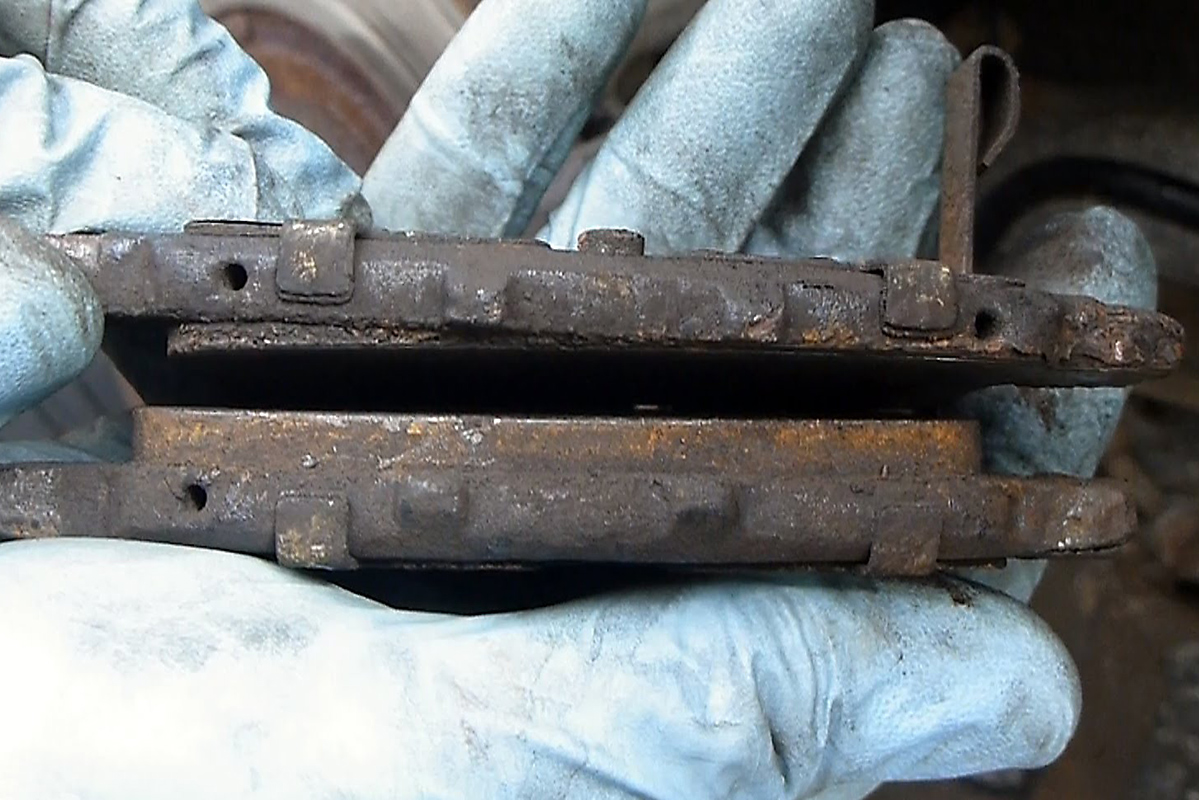 This outer pad was rusted to the caliper on one side, causing it to wear at an angle

On closer inspection, it's likely that you'll notice a large amount of brake material dust on the affected caliper and maybe a damaged dust boot on the piston. You'll probably also notice that the piston on the side the car is pulling to extend farther out of the bore than the other piston. The remedy for this is to either replace or rebuild the caliper.

Manufacturers will tell you that you must replace the calipers when one is frozen or stuck as described above. You actually have two options, however. You can go the quick and easy way and replace the frozen or stuck caliper, or you can rebuild the stuck or frozen caliper. Replacement just requires hand tools, brake fluid, and bleeding the brakes to accomplish. Rebuilding the caliper requires a little more initiative, compressed air, and the tools to remove and replace the caliper, plus the brake fluid and brake bleeding.

The pull that happens only when braking 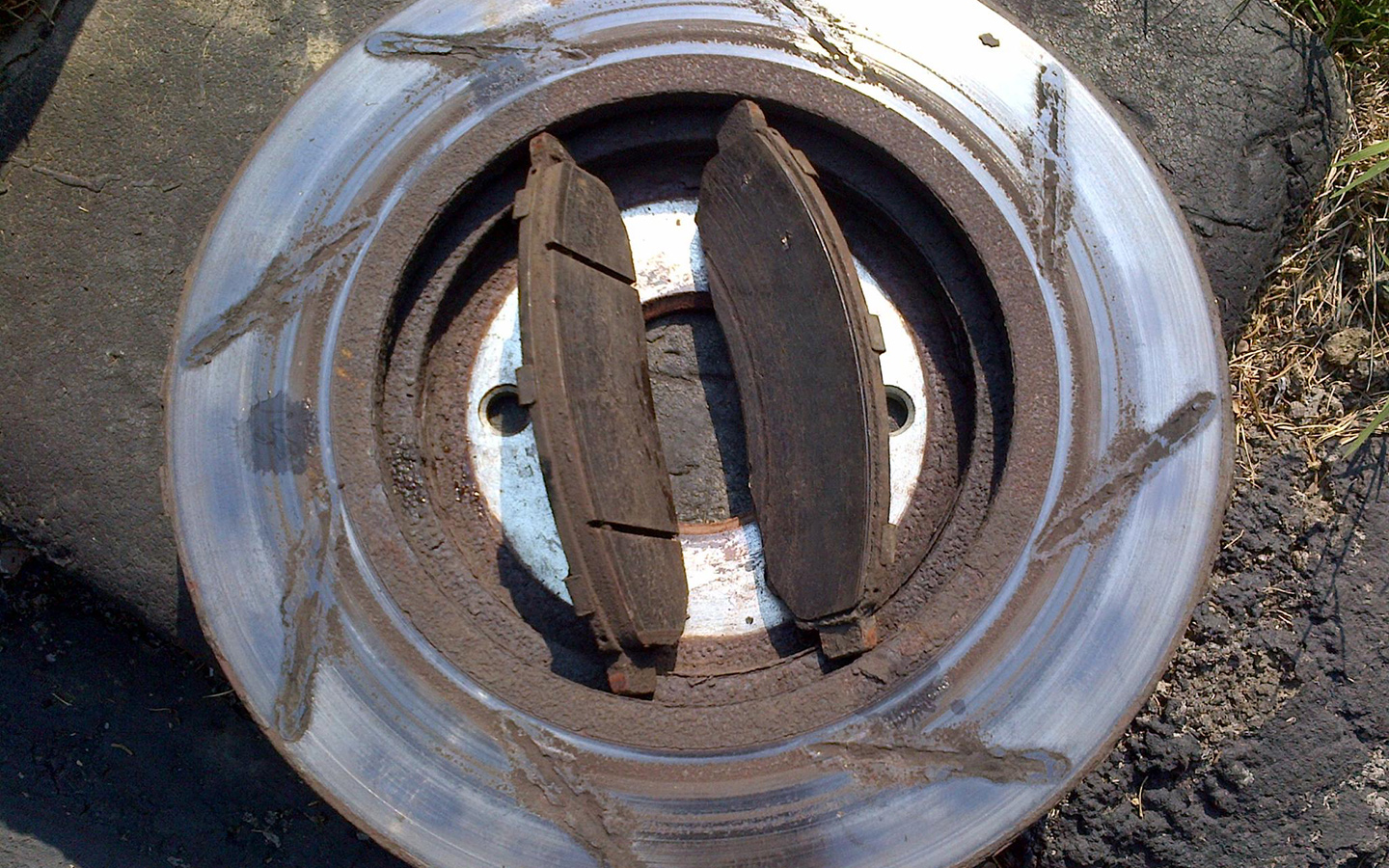 You hit the brakes, and your car pulls to one side. This symptom is caused either by a piston hanging up in the caliper bore or an insufficient amount of pressure being applied by the caliper. Take a look at both sides. If the right front caliper is leaking, the vehicle will jerk/pull to the left when you hit the brakes. You'll also see evidence of leakage somewhere along the brake line. Replace the leaking brake hose/line, bleed the brakes, and off you go.

A strong pull to one side upon brake application, however, can also signal a piston that's hanging up in the caliper bore because of rust in the bore or a leaking caliper seal. You're not going to see any wetness around the brake lines or caliper. You will notice that the caliper on the side the vehicle is pulling toward will have significantly more wear than the other pads. For example, if you hit the brakes and the car pulls to the right you'll notice more wear on the left side pads than those on the right.

If you take your car to a shop with this problem, your estimate is going to depend on the deal the shop has with its supplier and its labor rate. A good deal with the supplier and a higher labor rate, and the shop is going to recommend rebuilding the calipers and their argument is going to be that the parts cost is lower. But they're going to double their profit on labor. With a little bit of skill, courage, and prep, you can save a significant amount of money by rebuilding the caliper(s) yourself. 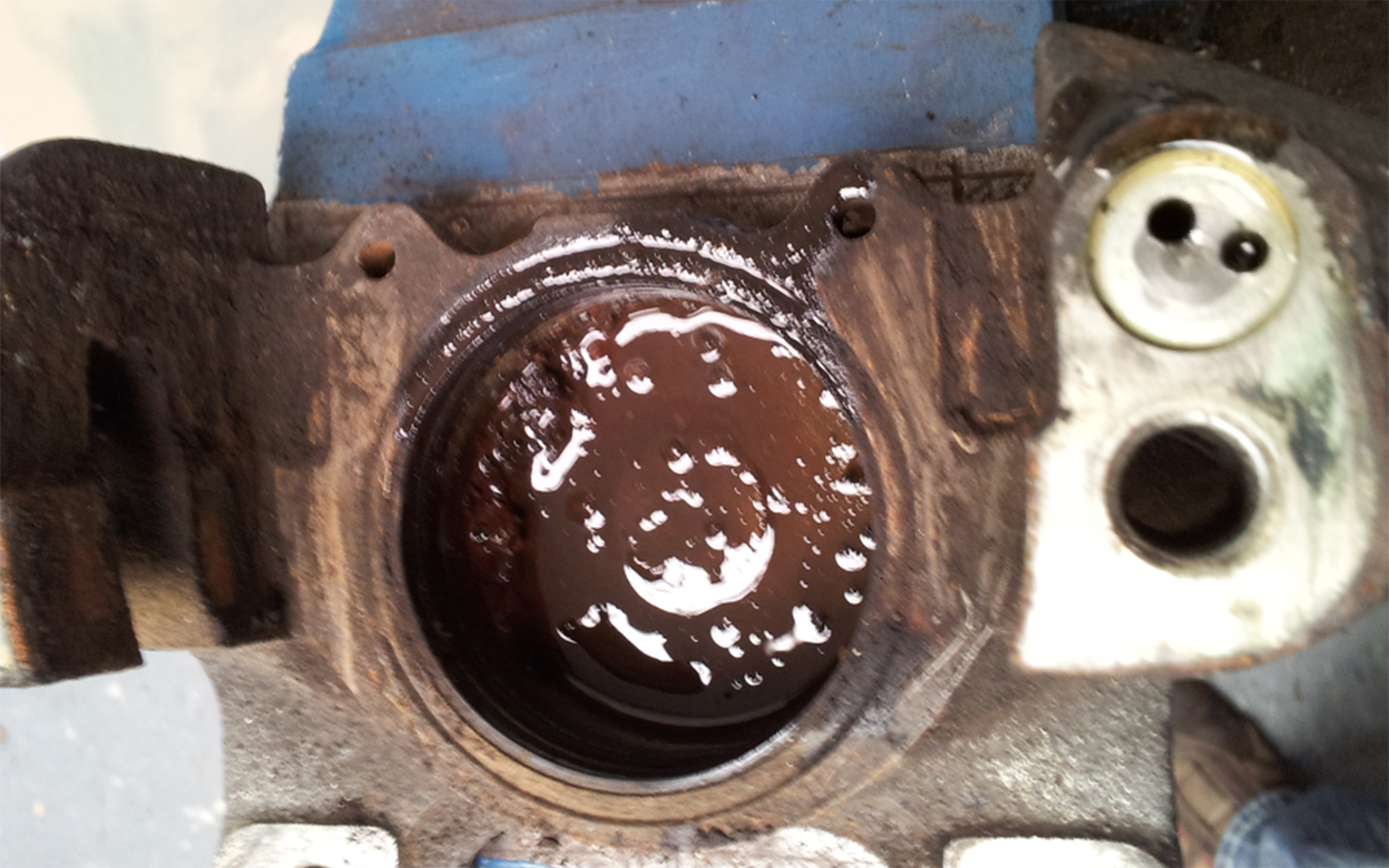 Contamination of the brake fluid is the No. 1 cause of brake problems. Brake fluid is a hygroscopic fluid. What this means is that it doesn't repel water but absorbs it. Over time, this causes rust to build in brake-system components. It can also lead to brake fade, as heat literally boils off any water droplets in the brake fluid and turns them into air bubbles.

Flush the brakes to prevent problems 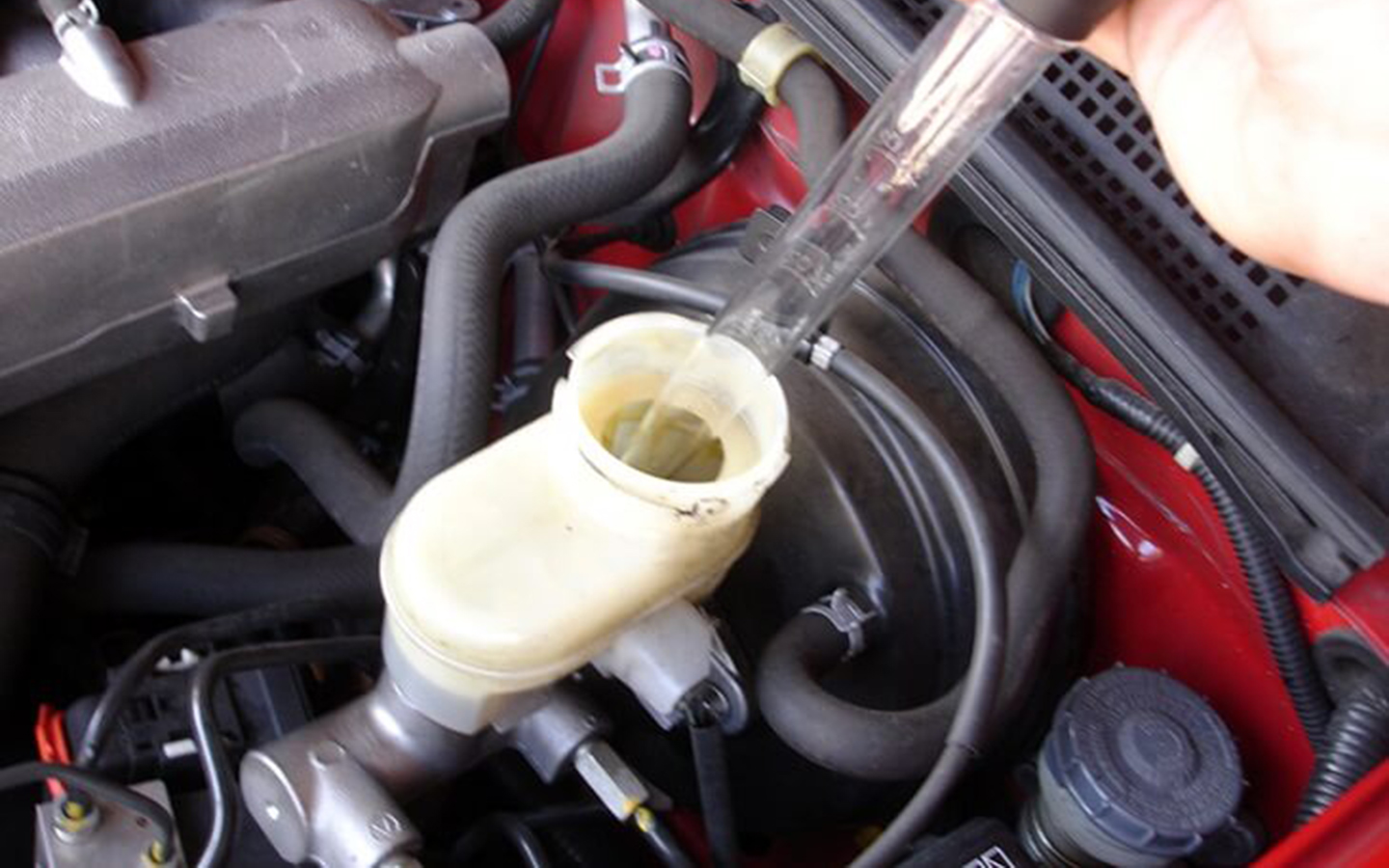 You can combat this rust buildup that causes brake-system problems by flushing the system. Here's how:

1. Suction the old fluid out of the brake reservoir.

3.Using either a power bleeder or the manual bleeding method, flush the cleaning fluid through the system until the fluid at all four corners is clean.

4. Refill the system with new brake fluid and thoroughly bleed the system.

How Much Does It Cost to Replace Brakes?

How to Replace Brake Rotors

Brakes 101: What You'll Need to Maintain Your Brakes