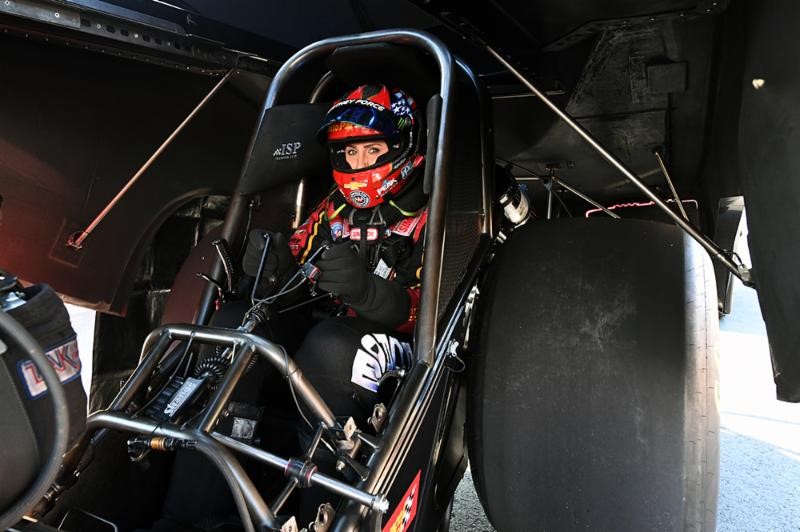 YORBA LINDA, Calif. (December 15. 2017) -- Courtney Force, driver of the Advance Auto Parts Chevrolet Camaro SS Funny Car, finished 2017 a career best third in the NHRA points standings. Her season was highlighted by a new sponsorship in Advance Auto Parts as well as five finals appearances and seven No. 1 qualifiers. She took a couple minutes to talk about her season long consistency, her sister's championship and what she's looking forward to in 2018.

Q: You had a career best finish in 2017 coming in third in points. How much confidence does that give you for 2018?

It was huge. Really excited about the team that I have with Advance Auto Parts and all my crew guys my crew chiefs --- They gave me a phenomenal race car all season long we had a lot of consistency and for us to finish off the season as my career best, finishing third place. I was really proud of us. I think that was a huge accomplishment for us and it really goes to show how far we've come throughout the years. Being that we were in the hunt for the championship right down to the last race at Pomona really goes to show that we have a championship team. We're ready to battle it out in the 2018 season and really hope to go for that title.

Q: With the retirement of Alexis, you are the lone female in Funny Car. Does that cross your mind?

It's a little surreal to think that I'll be the only female in Funny Car. I've always raced against Alexis since my rookie season. It's a little sad. I'm definitely going to miss having her out there and I'm really hoping that she's going to change her mind and come back. I'm proud of her for making that decision I know that wasn't easy for her. It's going to be strange not to have another female out here but I'm going to have to do the best job that I can to beat up on the boys a little bit and hopefully have a successful season. I know that she's going to be out there cheering me on.

Q: You came close to doubling up with Brittany in 2017. What would that be like?

I definitely think we have a good chance of doubling up. Brittany and I came so close at so many different events. I think its only a matter of time. I'm really excited especially seeing her come off a championship title and winning the final race at Pomona. Really happy for her and really excited to see how far her team has come. I know they have a great thing over there and I think we do too with our Advance Auto Parts guys. Excited to go into 2018 and really hope to be in the winners circle along side my sister. Definitely would mean a lot because we are so close and we've both worked really hard. It would be really cool to celebrate together at the end of the weekend.

Coming off our career best season makes me really confident going into 2018. I can't wait to get it started. I'm already looking forward to going testing in January. Really just can't wait to see what we can do. We had a consistent race car, made it to multiple final rounds, multiple No. 1 qualifier hats, we set a lot of different track performance records but we didn't manage to make it in the winners circle and that is a little frustrating. It still feels good knowing that we had such a great car that was so consistent, all year long, to still manage to get us in the No. 3 spot in points by the end of the year. We just have to keep that consistency going and keep the rhythm going and hopefully we'll make it to the winners circle next year and hopefully a number of them.

Q: When you hugged Brittany at the top end of Pomona 2 after she'd won the championship, what did that feel like? What did you tell her?

I was strapped into my Funny Car right before round two when I found out that she won the championship. Obviously, I was an emotional wreck and then my team got onto the radio and told me I had to get my stuff together and get ready to race round two. I was completely overwhelmed and excited for her. We knew there was a shot at it but none of us put too much thought into it, we didn't want to get too excited. But once she clinched it after the second round I was really excited. I couldn't wait to race down to get to top end. I was able to get the round two win and then jump out of my Funny Car and couldn't wait to run over and give her a big hug. It was just a really proud moment for me. This is something that, growing up, Brittany and I have always wanted, to be out her racing professionally and wanting to win races and it was always a dream to win a championship. To see my sister achieve that with her Monster Energy team was just really surreal. It was a really proud moment for our entire family. I told her I was so proud of her. I was hugging her and we were telling each other we couldn't believe that it happened. I was just really excited. To see her be able to achieve the one goal that every driver is out here is working hard and fighting to achieve; for her to wear that leather jacket that we grew up watching our dad wear our entire life, it was just a surreal full circle moment. It gets me really excited for what is to come in the 2018 season. I'm trying to follow in her footsteps now to win the championship title. Hoping to get that job done next year. Just really excited for her and her team because they worked really hard for it.

Q: Seeing your dad's reaction to Brittany's Top Fuel Championship, how do you think he will react when you win a Funny Car championship?

I think dad is really proud of all of us out here. Watching him fall to his knees when Brittany won was the moment where I kind of came loose and started to getting emotional because that was a huge moment. He knows it's not easy winning championships out here. He's won 16 himself and he knows it's not an easy thing to do. For him to see his daughter win the championship, I think he probably didn't know if it was ever going to happen and I know he's really proud of her and that he's really excited for 2018. I know he's hoping I can get a championship title soon, that's stuck on his mind right now. I have a great team and the support of my entire family and the support of my sponsors so I know we have a shot at it. I know he was proud of her and all of his girls being out here doing what we love.

From 2017 I'm going to take with me, fighting hard and keeping it consistent. We may not have gotten a win but we were all very positive and very motivating to teach other over at our Advance Auto Parts team. I've got an incredible group of guys and I think that we all work very well together and we just need to push to continue to make this car even more consistent. We're already looking at things in the off-season, what we can change and where we can go back to where we were running our career best E.T.s at the beginning of the 2017 season and seeing how we can reflect that in 2018 but continue it all season long. Already starting to think about next year talking with Dan Hood about it all and looking forward to it. There's going to be a few changes but I think it's only going to be great things that are going to come for 2018. If we can take the consistency with us into next year we are going to have a really great shot at a good finish.

Q: You are becoming more involved with Advance Auto parts. What is the best part for you with regards to that marketing relationship?

It's been so incredible working with Advance Auto Parts. Every single team member that I've worked with or spoken to, the CEO Tom Greco I've met at multiple events, everyone has been amazing. Its been a really great relationship. They're fully involved and fully excited about the NHRA and working with me as their diver. I'm really excited to be out there supporting them and representing them in the brand and they stand for a really great thing. I helped them over in Texas speaking with the team members that were affected by the hurricane as well as over in Florida during the off season. They've really got a great company where they are focused on selling parts but at the same time they're really focused on the safety of their team members. That was really important to me, to know that they've got such a great foundation over there at Advance Auto Parts whether it be on the race track, in the business but also behind the scenes as well. It makes me really proud to drive for them and to know how excited they are building me as their brand ambassador. It just gets me really excited for 2018. I know they are really excited to help grow each other and I think there's going to be really great things to come.