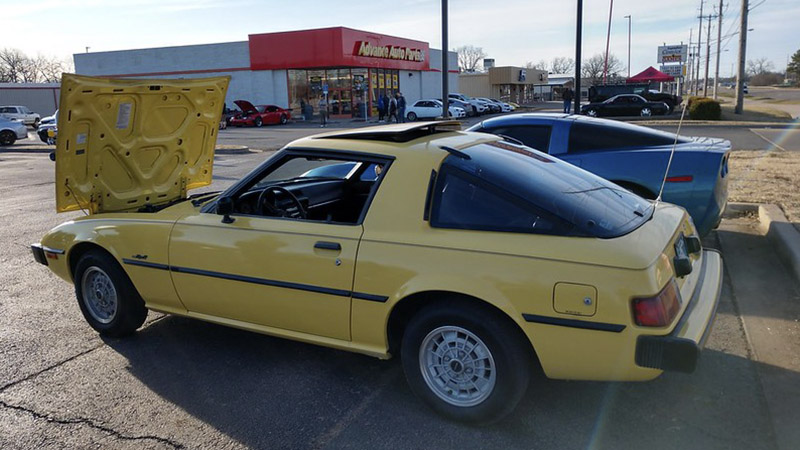 Car shows are an awesome way to introduce the next generation of enthusiasts to car culture. One of the fastest growing car shows offers no entry fees, classes, judging, or trophies. Cars & Coffee is a worldwide phenomenon featuring amazing and rare vehicles, and the enthusiasts willing to chat about them. Come get a free cup of caffeine and see why this is the best show you'll attend this year.

Cars and Coffee, and History

Like a lot of enthusiast car culture, from hotrods to lowriders, Cars & Coffee started in southern California. In 2003, a small group of car enthusiasts met up early in the morning at a shopping center called Crystal Cove outside Laguna Beach. The palm tree lined parking lot overlooked Highway 1 and the ocean, and between the nearby scenic drive and the perfect weather, it quickly gained traction as the perfect location for enthusiasts with impressive cars.

The unnamed show did well for a few years, but the nearby residents didn't appreciate hearing Ferrari F40 exhaust note at 7:00 am on a Saturday, and the land owner wasn't even interested in the event, so it shut down in 2006 and moved to a larger Mazda/Taco Bell lot in nearby Irvine. That's where the meet became legendary. The newly named Cars and Coffee (where some meets provide a free steaming cup for the early risers) lasted nearly a decade, but as development crept into the area, the new neighbors complained about the noise, and the Irvine C&C shut down in 2014. By that time, and thanks to the power of social media, copycat meetups had spread across the country and even around the world. Odds are you have a Cars and Coffee event nearby.

“It's important to me to keep it going and growing in size because I enjoy the cars, trucks, pretty much anything on wheels," said Terri Egleberry, Secretary/Treasurer for the Stillwater Antique and Classic Car Club, and organizer of her local Cars and Coffee meet. She had initially only attended the meet, but when her local C&C organizer left the state and no one else volunteered to save it, Egleberry stepped up. (She shows a civilian Humvee.)

The variety is astounding, especially at the original. A right-hand drive R34 Skyline sits parked next to a Ford Model T. A Demotaso Pantera and Lamborghini Miura parked with a modern Ferrari F8 Tributo. A 351W Ford V8 swapped into a first-gen Focus. Subarus of all kinds and their all-wheel drive fanatics, and a different flavor of 4WD in the military-spec M35 6x6. There's Corvairs, “hippie busses," and 911s all offering different takes on rear engine fun, while a Stutz Bearcat, Sunbeam Tiger, Opel GT, and Morgan 3 Wheeler display a variety of affordable light-weight sports cars over the last 100 years. There's a massively expensive Ford GT and a nearly priceless Mazda 787B race car. There's open headers, hopping lowriders, Lamborghinis with questionable wraps, nitrous purges, and all manner of automotive variety.

Even an airplane showed up once. There's all kinds of rare or weird cars that only leave the garage for five miles a month, but end up making it to C&C.

Traditional car shows can be tons of fun, but the tradition tends to lend itself to routines and exclusiveness. There's the fliers where they specify classes, maybe breaking down by decade or make/model, with specialty shows just for Corvettes, BMWs, and so on.

There's rules everywhere, from the start times, to the judging. Then, only certain vehicles get trophies, but all owners have to stay there the entire time, often five hours or more. The owners that show can be private, preferring only to speak with other numbers-matching owners, or ignoring new cars, or those with limited modifications. Cars and Coffee is a much more open type of “show." That's a real change from the cliquish crowds that often frequent these kinds of events.

“It's a general car meet for all ages," said Kyle Walker, General Manager at Advance Auto Parts store 8423. This location hosts a local C&C meet on the last Saturday of the month. “What's a better place to hold it than an au

to parts store, right?" Walker said he likes that Advance hosts this meet, as it's important for auto enthusiasts to feel supported and represented where they buy parts. He likes how the lack of entry fees, classes, and judging combine to make it a no pressure atmosphere, where any driver can talk and share tips with anyone, rather than feeling competitive.

“They're both the same thing," Walker said, noting how traditional car shows and Cars and Coffee have the same goal. “Car shows are dedicated to certain cars, supercars or antiques, and the show itself. This is more of a general meetup, any age, any condition, daily drivers."

The current Ford Mustang is the best car it's ever been, with huge horsepower and torque, wrapped in a capable and good looking package. That affordable price tag (and depreciation), mean that Mustangs can quickly fall into the hands of those with more money than skill. There's a few memes on the internet featuring Ford's iconic pony car and various amounts of curbs and crowds. For a few years there, every time the Mustang received factory upgrades, the comments section was basically a collection of “But how fast can it hit the crowds?"

This is due to spectators and videographers standing at the side of the road, wanting to watch or record for Instagram the impressive parade of expensive and unique iron on the road. Drivers, feeling the eyes of the crowd, sometimes give it more throttle on exit than necessary. While properly enjoying your ride is great, reaching its limit on city streets in front a crowd is not great. When it goes wrong, it does so very publicly, and then you're on the internet forever.

Cars and Coffee events typically list a few common sense (or legal) rules such as no burnouts, speeding, or racing. Just in case, there's usually a black-and-white sitting down the street with its lights on as a reminder for those leaving. Even the subtle threat of a ticket doesn't always keep them in line. High speed shenanigans caused Houston Cars & Coffee to hit pause for two months in early 2020 to reassess their situation and see what they can do to prevent the vehicular stupidity.

If you want these free events to continue, everyone needs to stay within the traffic laws. Here's a few other common sense rules: Don't touch the cars. Look all you want, but respect other people's property. Respect all the vehicles. It may not be your thing, whether its classics or modern, tuners, pro-touring, drift missile, stance, bro-dozers, and so on, be positive or move on.

It's not about cars, but car people

C&C has one major thing in common with the traditional (good) car shows: it's not about the cars. Sure, they might be the focus of the meet, but it's the people who attend that matter. It's the old guy who bought the muscle car after returning from Vietnam, and kept it up this whole time. It's the parent/child build that they worked on together, making memories for a lifetime. It's the homemade race car that actually hit on a winning formula. Even Jay Leno visits the Malibu Cars & Coffee, engaging people on their builds rather than talking about his TV shows.

“Car people are in a league of their own," said Egleberry. “Utmost respect for the other guy's car and all of the work that's gone into building and/or maintaining them. Oh the stories, every driver has a different story about how they found and restored their dream car... you know, the one they had when they were in high school, or the one the other guy had and you always wanted. Every event is full of adventure for sure."

Have you been to a local Cars and Coffee meet up? Let us know in the comments.

Why Gift Give from Advance Auto Parts

A History of Innovation: FRAM®