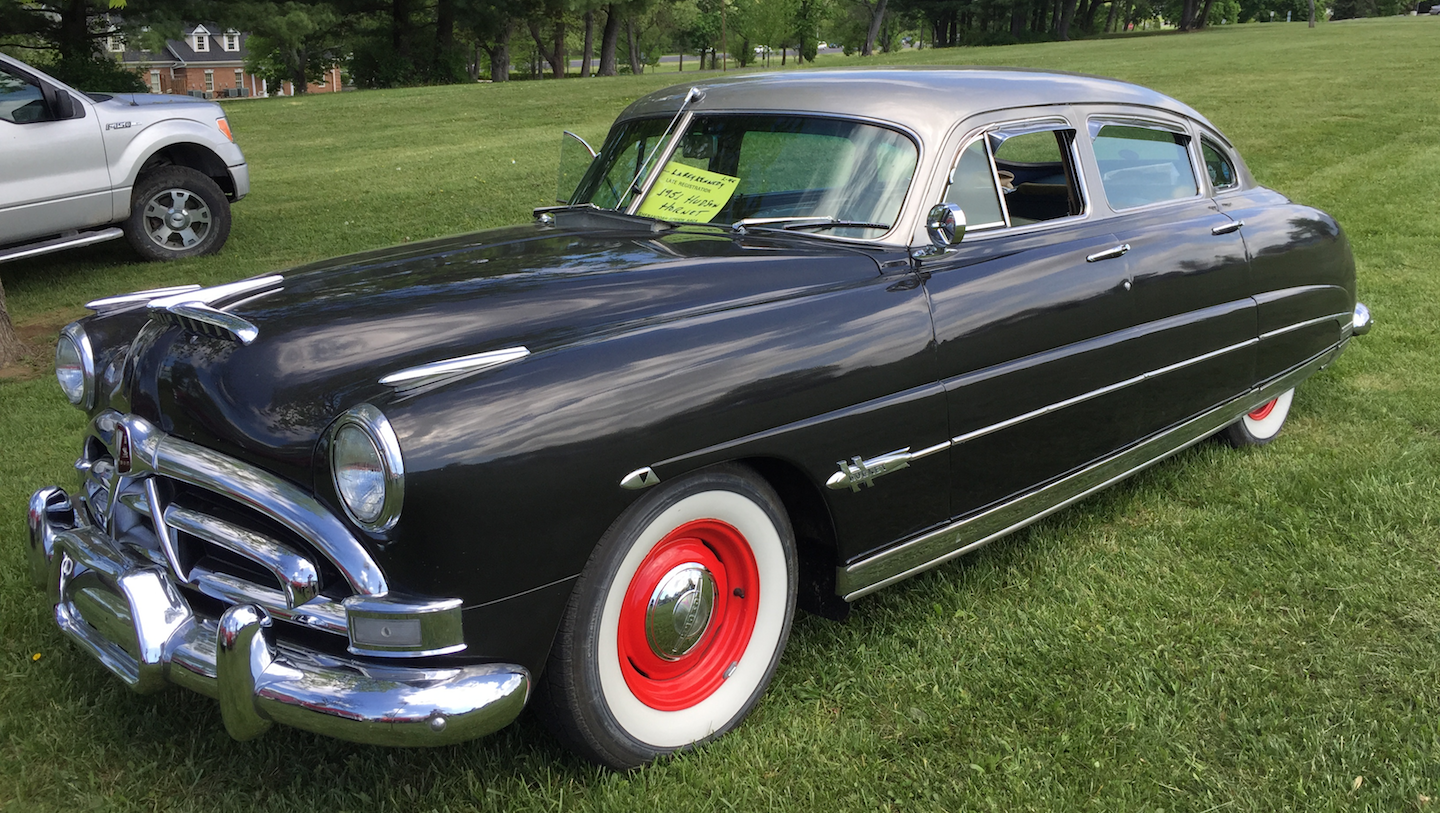 When the United States entered World War II, domestic automobile production shut down as the entire industry switched over to the war effort. As a result, the first models to come out of Detroit after the war were essentially 1941 models, and it took a couple of years for new ones to be developed.

Hudson was no exception, but its 1948 models were a radical departure from Detroit design. The '48 Hudsons featured "step-down" construction, with a dropped profile and lower center of gravity. At a time when most designs had the body sitting on top of the frame, these had floor pans slung between the frame rails; the floor was lower than the door sills, so you quite literally would "step down" into the car. 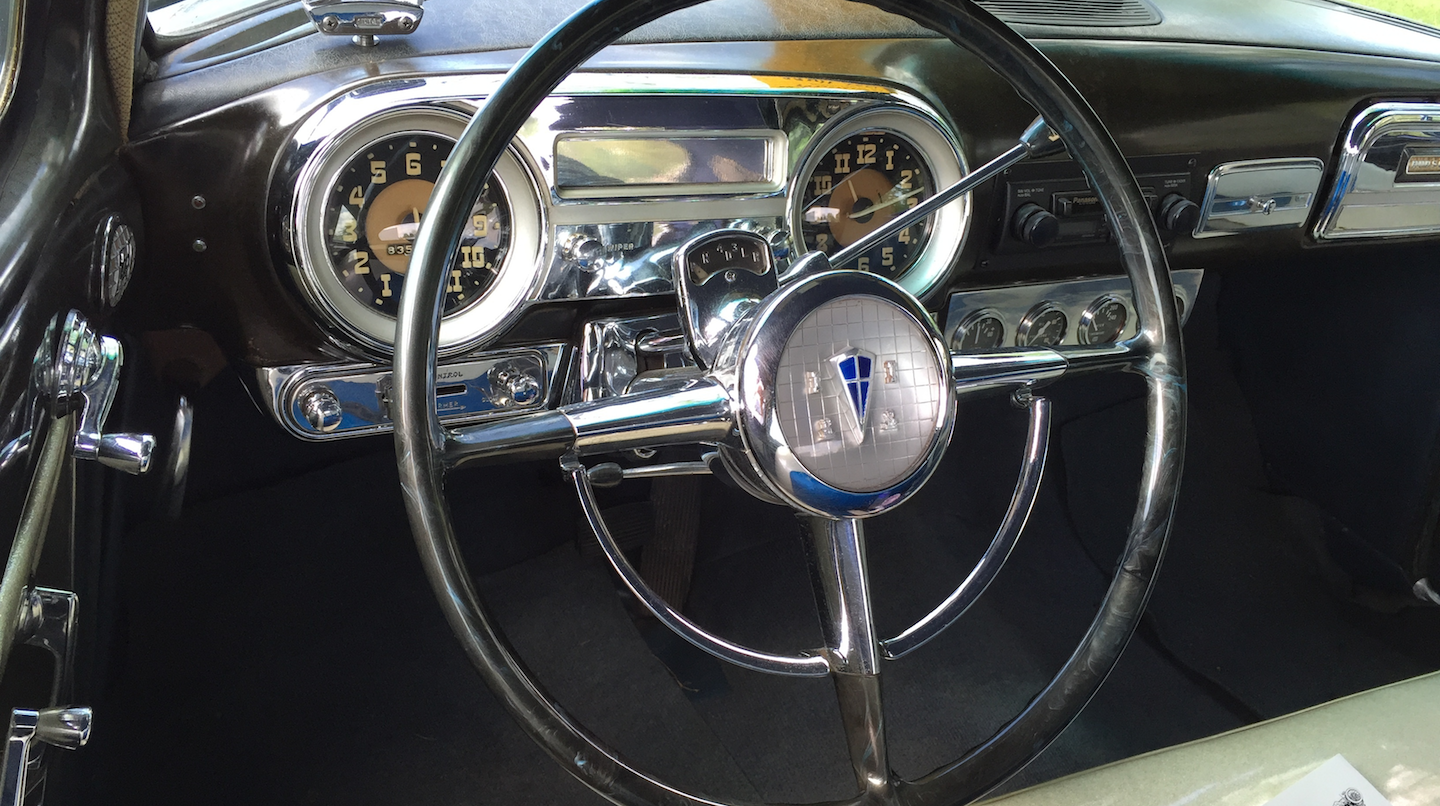 These cars were essentially the first unibody design from Detroit, and drivers soon realized that the Hudson had better handling and road manners than just about anything else on the road. These big coupes and sedans had a sleek, aerodynamic profile with gun-slit windows, a roomy and well-appointed interior, stiffer body and frame, and a lower profile, and race drivers soon found that their handling and cornering ability gave them an edge on the track.

In '51, Hudson introduced the Hornet alongside the Commodore model. The 1951 Hudson Hornet's standard engine was a 308-ci flathead six-cylinder, still the biggest six ever put in a passenger car. In stock form, the six put out around 140 horsepower and 275 lb-ft of torque, and was capable of speeds well over 110 mph. 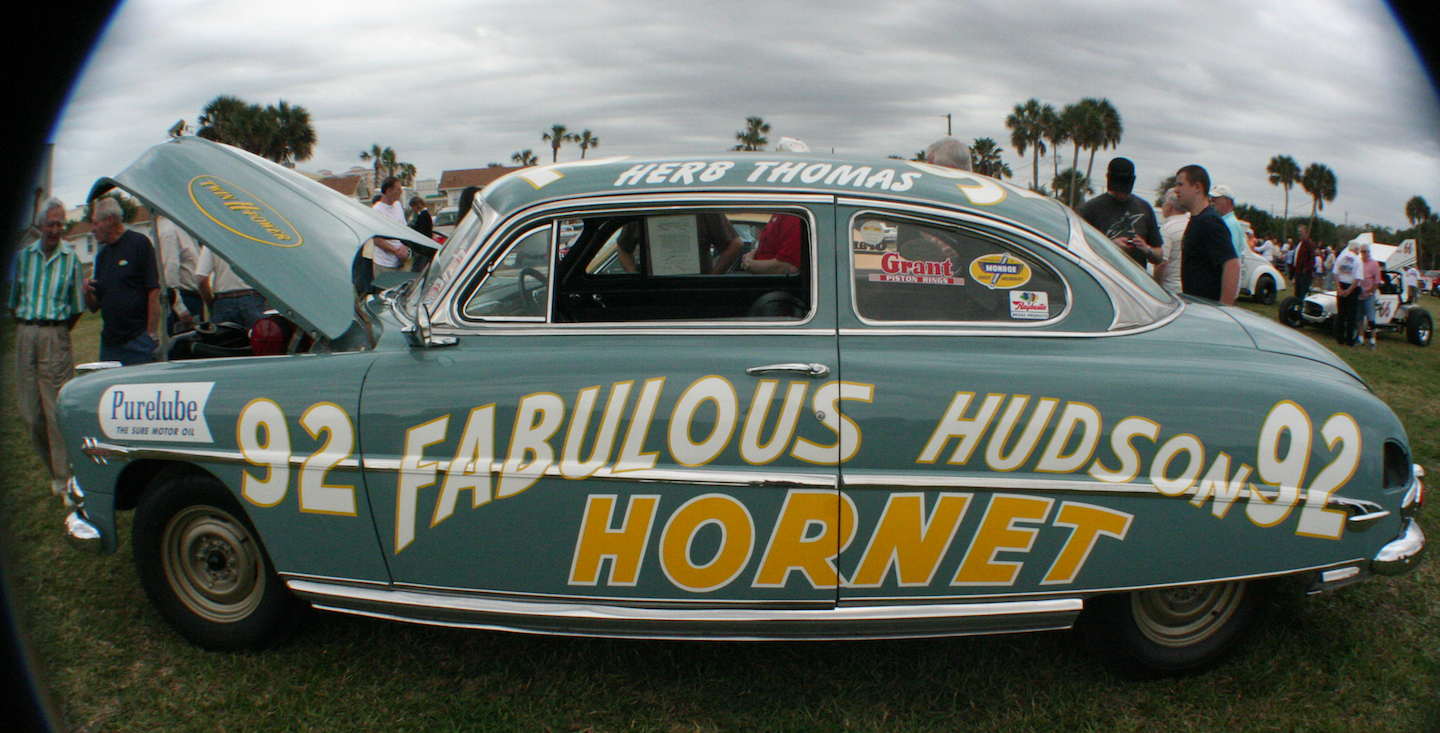 In the early days of NASCAR and AAA racing, the cars were truly "stock cars" in that companies had to offer street-legal versions of their race models to the public. Hudson soon saw that it could capitalize on its racing success, and starting in 1952, it offered a "Severe Duty" package called the 7-X for the Hornet. The 7-X engine featured two side-draft one-barrel carburetors, a lumpy camshaft, oversize valves, an exhaust manifold that split into dual exhausts and a functional ram air hood scoop. Its aluminum head was shaved down for higher compression, and it was also equipped with domed aluminum pistons.

Put it all together, and the 7-X engine was putting out around 210 horsepower, far more than Ford, Oldsmobile, or Cadillac overhead-valve V8s of the day. In the hands of the right mechanic, a lot more than 210 ponies could be squeezed out of that engine. Its flat torque curve gave it plenty of low-end grunt and, combined with its road-handling ability, the Hudson Hornet was unbeatable on the dirt tracks and rare paved tracks of the early '50s. Drivers like Marshall Teague and Fonty Flock dominated early NASCAR racing, all driving race-modified Hornets.

Ahead of its time but not quite timeless

The Hornet's build quality was excellent—Hudson's engineers didn't have the resources for material analysis and other more sophisticated testing (not even a test track!), so they tended to overbuild and design everything more robustly than needed. Its price point was about the same as Buick and Chrysler products, and in the end that became a problem.

By 1953, the step-down body was starting to look dated, but the company could not invest money in new styling. For the 1953 Hudson Hornet and 1954 Hudson Hornet, the model got a face-lift, but the writing was on the wall and sales were starting to fall. In '55, Hudson's management was approached with a buyout and accepted—the company merged with Nash to form American Motors. The step-down design was abandoned, and the last couple of years of Hornets were just Nash models with different trim. The nameplate was deleted for good in '57.

The Hornet legacy remained, though—Teague drove a Hornet to win 40 of 48 races in a single season, and even after Hudson disappeared as a standalone company, NASCAR ruled that drivers could no longer drive "orphan" cars from companies that went out of business. Hudson engineer Vince Piggins, who designed the 7-X package, went on to Chevrolet, where he was responsible for much of the company's performance hardware (including the Camaro Z/28).

And, of course, a Hornet was committed to film in the movie "Cars," with Paul Newman giving voice to the Doc Hudson character modeled after the Fabulous Hudson Hornet.

Got any Hornet nostalgia? Tell us about the good old days in the comments.